Where lesser teams might have imploded, Collingwood's resilience is paying dividends
Some AFL clubs play with nothing to gain once they're out of finals contention. Collingwood? In the last few years, they've played like a team with nothing to lose. In partnership with CGU, we look at how that resilient approach has helped lead to a far more successful 2018 season.
By Jay Croucher
Aug 15, 2018

It’s the hope that gets you, not the despair – or in Collingwood’s case the past couple of years, it’s not the bitterly underwhelming starts to the year that get you, but the promising finishes.

It would have been easy to let go in 2016 and 2017. 2016 felt finished for Collingwood by Round 4 and was by Round 12. 2017 seemed done after Anzac Day, and certainly after Round 8, when Collingwood fell to 2-6. A mini-revival was followed by a less mini-funk, and by Round 16 and a second loss to Essendon, the prospect of finals descended into ‘mathematical’.

In both seasons, some Collingwood fans might have secretly (or not so secretly) hoped for an even deeper spiral, for the purpose of bottoming out and reaping a draft harvest.

Collingwood, though, stubbornly and resiliently, refused to make their failure emphatic. They offered no closure through disaster.

Instead, they battled. They closed 2016 5-5, with two of the losses by less than a kick to both the reigning premier Hawks and the premier-in-waiting Bulldogs. 2017 ended with seven strong performances in a row, the finale – Dog Demon Day Afternoon – memorably sending Melbourne’s season to hell.

Lesser teams might have imploded. But Collingwood refused to end things definitively or descend into apathy.

But Collingwood refused to end things definitively or descend into apathy. Instead, they played like they had nothing to lose instead of nothing to gain.

In 2016, they won by five goals as eight-goal underdogs at GWS, and upset the finals-bound Eagles at the MCG. They were two moments from Marcus Bontempelli and Jack Fitzpatrick away from closing the season 7-3 with four wins over finalists.

In 2017, their final stanza was even more impressive, gutting out a resilient underdog victory in the wet away to a full-strength Gold Coast and pushing Port Adelaide and Geelong to the limit. In between, they overturned what appeared to be an insurmountable deficit to beat West Coast and created what appeared to be an insurmountable lead against the premiership favourite Crows.

Being born with profound deafness, a casual observer might have forgiven Sam McLarty for not even thinking to dream of a footballing career.

But McLarty is not one to give up on a dream so easily.

“I realised that, yes, I’m deaf, [but] why be upset about it? I might as well embrace it.”

“Picking up a football was just part of that.”

Showing true resilience, McLarty – who “can’t hear anything at all” without a cochlear implant – did better than the vast majority of Aussies by making it to an AFL list.

“I wanted to prove to everyone that, me being a deaf person, I can do everything that anyone can do.”

“To pull on the black and white stripes would be a dream come true. Admittedly, I go to bed thinking about it every night.”

With his constant resilience, a Collingwood value that’s clearly a trademark of McLarty’s too, that dream might soon be a reality.

In the closes of both seasons, particularly 2017, the Pies appeared to find something that went beyond positive results and honourable losses. They played with greater offensive flare, and after having both seasons defined by inconsistency and crushingly disappointing individual games, they showed an ability to string together consistent runs of intense, competitive, resilient football.

There is sometimes a tendency to read too much into a team’s late-season surge after being eliminated from finals. Sometimes, it’s a confluence of misleading factors: more fancied opponents taking the foot off the gas because of lack of incentive, fatigue and injury making performance naturally more volatile, or simply, a small sample being unreflective of reality.

But Collingwood’s best performances came against teams with everything to play for. They ended Melbourne’s season and almost did the same to West Coast in 2017. They nearly kicked GWS and Hawthorn out of the top four in 2016.

With public opinion already weighted against them, the fans’ enthusiasm perhaps slightly wilting, and the coach on the hottest seat in football, they found something in these late-season stretches, something to carry into the off-season, for the players and the club.

Unanswered questions, or questions seemingly answered in the negative, defined the starts to these years, but the steel displayed over the closing weeks showed a resilience that hinted at something special, or at least something worthwhile. 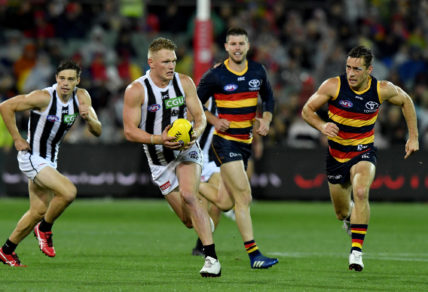 Adam Treloar has emerged as a standout for the Magpies in recent years. (AAP Image/Sam Wundke)

Players emerged. If it wasn’t already clear, Adam Treloar confirmed his bona fides as an elite midfielder with an electric run at the end of 2016. Darcy Moore also gave us concrete affirmation of his star-level talent then by bossing the Eagles and Bulldogs, and looking like a generational key position player.

At the close of 2017, Ben Reid suggested his transition to the forward line could be seamless, Taylor Adams proved he could carry the midfield load sans Scott Pendlebury, and Jordan De Goey showed us glimpses of 2018. Daniel Wells, too, showed what he was capable of when healthy.

The resolve showed in these two ending stretches probably saved Nathan Buckley’s job, for it convinced those with a call to make that he and the players were as one. It changed the narrative heading into the off-season from one of despair into one of quiet optimism. Beyond the coach, these stretches demonstrated the resilience of the playing group. It showed a backbone that some might have thought didn’t exist, proved that it’s a value core to the club and their partners like CGU.

It surfaced again at the start of 2018. After losses in the first two rounds and an immediate 18-point deficit to start Round 3, another lost season loomed. But the Pies gathered themselves, quickly erasing the deficit on the scoreboard and then in the win-loss column.

With their backs to the wall they started winning, and this time they’re playing not like they have nothing to lose, but instead like they have everything to gain.

Unless otherwise stated, all images are credit: Getty Images