Loyalty: How commitment to a favourite son has paid off
Nathan Buckley was revered during his time as Collingwood skipper. In partnership with CGU, we look at how the club's loyalty to the man has helped them move towards the summit again.
By Jay Croucher
Aug 22, 2018

The popular refrain when criticising Nathan Buckley’s Collingwood was simple: what was his team’s identity? Or rather; why didn’t it have one?

Re-litigating the collapse of the 2010 premiership team is the tortured Collingwood fan’s favourite modern diatribe. Depending on one’s bias, there were genuine reasons or masking excuses for the failures of 2012-2015.

The 2012 and 2013 Magpies were the last gasps of someone else’s team. 2014 was decimated by an injury list that ventured into the absurd, and 2015 turned on a six-game mid-season losing streak that quickly made 8-4 into 8-10, the first three of those losses all by 10 points or less to quality opposition.

This is all to say, after six years in charge, no one really had much of an idea whether Nathan Buckley was a good or bad coach. The strongest defence, though, was that his teams always seemed to try – the players appeared loyal to their coach.

Outside of a bizarre opening month to 2016, Buckley’s players have typically given a supreme effort. For all the noise, that, at least, was something to hold onto.

But what was the team’s identity? There was no easily discernible structure, no idiosyncratic, catch-phrasey alignment to define the team – no Adam Simpson web or Alastair Clarkson cluster.

Buckley was always vague in public when asked about ‘the way Collingwood wanted to play’. When pressed, he would say that Collingwood was a team that wanted to pressure teams into turnovers then punish them going the other way, which, in the modern game, is like saying ‘we want to have a higher score than the opposition’. 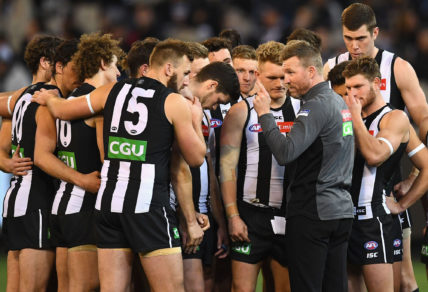 Now, though, in 2018, the Pies are looking like a team that is, well, pretty good at pressuring teams into turnovers and punishing them going the other way.

If Collingwood go on to win a flag under Buckley, hindsight will resolve all the ambiguities of 2012 to 2017 in the coach’s favour.

2012 and 2013 will be viewed as growing pains, and those that pointed first to injuries and bad luck as the decisive factors for 2014-2017 will speak with louder, more confident voices.

That may be true, to a point, but perhaps the more likely explanation, and the simpler one, is that Buckley got better as a coach.

He was allowed to grow, hone his strengths, address his shortcomings and craft the team that he wanted to craft. The loyalty leash extended as far for him as anyone, but perhaps such loyalty is not simply nepotism, but also just a reasonable decision.

In the AFL, a four-game losing streak has the masses calling for the gallows. If there are question marks at the end of the year over whether a coach has done enough to keep his job, then he hasn’t done enough.

Collingwood midfielder Adam Treloar has fast become one of the best players in the AFL, winning the Anzac Medal in 2018 as best player on ground in the traditional clash between the Magpies and Bombers.

It hasn’t always been this easy for Treloar, though, with the 25-year-old going through tough times to make it in the AFL.

Treloar started his journey at the Noble Park Football Club, where he often couldn’t pay registration fees or make it to training during his junior years.

“We really didn’t have much growing up. It was very rough and a lot of people from that area don’t make it as being successful people,” he tells CGU.

Treloar has made the loyal decision to go back and coach the under 12 team at the club this season, saying he will always be there for them.

“The most important things about being successful in life is having faith in a community and a culture and re-paying that faith in due time. Whenever they need me, I’ll always be there for the Noble Park Footy Club.”

It took resilience and persistence for Treloar to make the top grade in the AFL, but he always credits the club for paving the way, and remains loyal to them to this day.

“My fondest memories growing up are playing footy, and that’s for Noble Park. If it wasn’t for them, there’s no way I’d be where I am now.”

Continuity, though, is often the best free agent signing. You might think you need a star to fill a hole, but you often just need the familiarity of the face that was already there.

Continuity and loyalty, as much as anything, are why the Tigers are premiers. Damien Hardwick reached the crossroads after 2016, like Mark Thompson did after 2006. Like Mick Malthouse did in 2009.

All three coaches failed to deliver premierships within the typical timeline that a coach must deliver one to keep his job, but all three were retained, and all three delivered flags with new, exciting game styles plenty distinct from the way their teams previously played.

Sometimes, the search for something new is best guided by an existing figure.

Sometimes, the search for something new is best guided by an existing figure, someone who already understands the personnel and has done away with the growing pains of introductions.

Coach Buckley has had two-thirds of the life of a cat. But there was never an emphatic failure, a categorical disaster. All the disappointment came with caveats and reasonable, if kind, excuses.

The intangible benefits of having Buckley as coach – the articulate, candid dealings with the media and the powerful connection to the fan-base – likely gave him the chance to answer all the ambiguities in the positive, instead of having them decided against him.

With that loyalty, and with that life – lucky number seven – in 2018, Buckley and the Pies are living again.

Little is assured, but this year suggests they are on the right path, one that could lead to them being the next Richmond, the next Geelong, or even the next Collingwood.