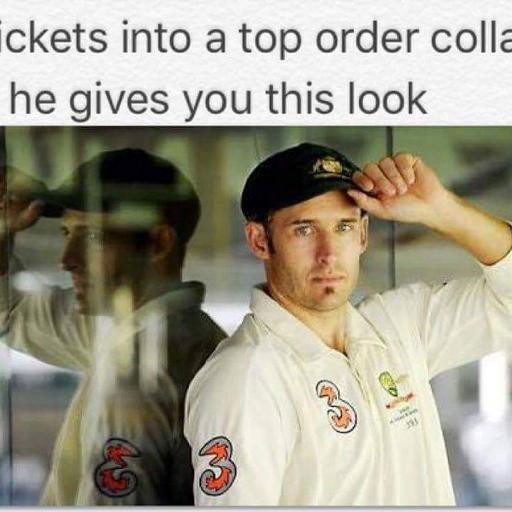 Ben hasn't published any posts yet

Oliver Davies is a number 11? He’s a middle order player.

I mean the Paine bashing at this stage is getting pretty boring. Sure it wasnt a good series for him tactically. but people love to omit the fact that Starc just went AWOL in the third and fourth tests and Lyon struggling for impact.

Adelaide Oval is a road, only reason Carey/Head have made any runs. Dont read too much into it

No we really are, we berate other teams for behaviour that we ourselves turn a blind eye to. If you dont want to see that Australians are hypocritical then by all means, do so, but people will recognise how little you actually know about the game in this country. I’ve seen comments from you in the past where you instantly jump to attack England/India/South Africa as soon as Australian cheating/grubby behaviour is brought up, so it tells me you think we are angels. And so what, players having a disagreement, umpires are increasingly edgy and keen to jump into an player argument it’s getting ridiculous, its not sledging/abuse, emotions boiling over and stuff happens, they werent physical, get over it, sook.

Not really talking about Paine are we though…..

“Looks ugly”, right so players arent allowed to engage each other? Australian players do it all the time especially against India. God we have the most hypocritical and parochially blind fanbase its not funny

Warner has nothing riding on this game. He’s almost fully fit, albeit with some lingering pain in the groin which will persist for a few months. He is playing in the IPL, guaranteed, it’s still over a month away

His career says that he struggles to make a lot of hundreds, he failed in England, what’s Head’s average outside of Adelaide and Perth? pretty poor i would imagine.

Yeah oath where as all the ODI cricket gone? Ponting era we played like 25 games a year. Now we have only played a mere 40 odd games in almost 3 years. Bit of a joke really

Bancroft is a perennial test failure. Neither he nor Marcus Harris should play tests again. Sub 25 average for both. And people were spraying on Burns……haha

We dont want to waste 40 tests on him like we did Shaun Marsh. Pukovski and Green need to fit into this side. And we have an openers slot to be filled, Burns needs a couple more hundreds before earning his place back, and 3/4 is tied up for at least the next 5 years with Labuschagne and Smith. Head is sort of the odd one out here.

Travis Head is basically the new Shaun Marsh. He’ll still be a 40 average FC cricketer in 5 years time, juuuussst making enough Shield runs to get selected for a few tests before doing nothing and rinse repeat. Alright he’s had a very good Shield Summer, fair enough, he probably deserves 3 tests on the trot next series to establish himself and try and make a hundred or two, but if he keeps making the same mistakes over and over then unfortunately his card should be marked.

I agree, he was terrible in the world cup. I think partly because he’s been shuffled all around the order with no clear role. If they just gave him the No.6 role and said its yours for the next 10 games he could settle into it, he is learning to rotate strike better and not get bogged down. Didnt quite have that strenth 18-24 months ago. COuld come back a better player though.

Have a look at his batting graph bro? I never said he was consistent or a ‘good’ ODI player, just that he has had more than one good knock.

It is always a stand alone series, what you on about?

Test Captain…..lol maybe when he can make more than 30 in Tests and is actually selected.

Thats all Head does, get flashy 20s/30s. His average is inflated from one massive hundred against a b grade Sri Lanka and then a not out 60* in the second innings.

He’s produced quite a few more good knocks in both ODIs and T20Is than Eden Park 146* 2017. To say that this is just his second good knock is massively disingenuous and you know it.

Finch deserves some faith, but if he flops for the remainder of this series, he’s gone. New captain at least. We need a captain for one of the 3 match series pre world cup so he can gel into the team at least. Make Smith T20i captain again perhaps? He slots perfectly into the #3 role.

All the perpetual Stoinis haters will now need to go back into the shadows for another few months after this monster knock. Him in the middle order, and on his day are so dangerous in T20i games. Maybe not ODIs, but definitely this format.

Literally no one with half a brain can consider Williamson/Root/Kohli better than Smith in Tests, just impossible. Average tells all you need to know

‘Fab four’ or not, Joe Root is a modern great

Everyone should use the Dukes ball, Kookaburra is a joke, doesnt swing after 10-15 overs.

‘Fab four’ or not, Joe Root is a modern great

No he hasnt? Dropped one catch, so what. Still easily the best fielder in the BBL

Yeah definitely, Head has played a hell of a lot of FC cricket for his age, 120 games or so for a 39 average. He wont magically become a 45-46 career average player in 2-3 years without some serious technical and mental improvements to his game, frankly he just comes across as dumb, unable to play with any sort of brains

Yes I watched Paine against India, good in the first two, poor in the third, ok but missed a hard chance in the 4th. Still a long way ahead of Carey in the gloves department. There are younger more exciting prospects in the Shield than Carey, Josh Inglis for example.