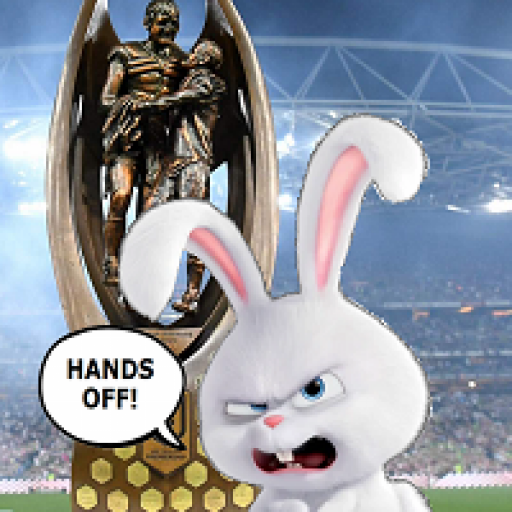 I’m with Cameron Murray all the way, but Damien Cook should be the Rabbitohs captain. Murray is too quiet and inexperienced and lacking maturity while Cody Walker is an ill-disciplined hot-head who never puts the team first and who is easily baited and manipulated by other sides.

If I had the choice I would rather have the flu than sit through another game like that from Souths. At least you know the flu is a temporary discomfort. I’m far from convinced that is the case with Souths atrocious form.

The team is a house of cards waiting to topple after first losing Reynolds, Gagai, Bennett and now Latrell again this year. Having Latrell back might boost Souths attack but it will do nothing to address Souths poor defence, accumulating error count and the worst completion rate in the NRL.

Souths have the wrong coach, the wrong HB and the wrong FB and they have two wingers that take turns playing right centre. Until that is addressed I don’t expect things to change.

Red Rob a 12-0 second half “win” hardly negates a 32-0 flogging by the Dragons no less in one half of football. It was a pathetic heartless effort from the boys and our clueless coach.

Kevvie Walters “survives and thrives” due to the manifest incompetence of Rabbitohs officials Blake Solly and Mark Ellison. If not for Adam Reynolds the Broncos and Kevvie would be in the same position they were last year.

With Ilias hooked hopefully sanity prevails and Nikorima will be at HB next week. He is a fish out of water at FB.

Congrats to all Dragons fans. What a pitiful effort from Souths and Dumbo Big Ears who looked more like Mr Magoo talking to elephants and thinking they were buses.

Judging from the glasses that looked more like two magnifying glasses taped together I doubt Mr Magoo saw much of the game. Yet somehow he believed Souths were showing signs of improvement and turning a corner when he was interviewed before the game. So in other words he was clueless!

For the Souths faithful though who had to suffer through a sub-par NSW Cup performance from the Bunnies it was agonising to watch.

I spent most of the first half dry retching into a bucket. It was the first time I can remember turning off or walking out on a Rabbitohs game before HT. I turned off at 24-0 when I could see Souths were already back in the dressing room mentally thinking about next week and looking forward to Latrell Mitchell’s return as if that would somehow reverse their poor form and record for the lowest completions in the NRL.

At long last the Greek Trojan horse got the hook. The writing was already on the wall though after struggling to acclimate to first-grade all year. Dropping the ball from the kick-off to start the game was a hint though for Dumbo.

Although, as always, Grant Atkins did Souths no favours this loss was on the coach and a team that looks uninspired and directionless. Souths may be in the top 8 for now but no team deserves to be in the top 8 when they consistently have the worse completion rate in the NRL.

This from a team that played in the GF last year! NOT GOOD ENOUGH!!

“Victor Radley excepted” means except for Victor Radley indicating he is NOT protected. Even Roosters fans got that. 😂

There are none so blind as those who will not see, Ken. I take it you are a Storm fan?
.
Lucky for 19 year-old Sam Walker, Kaufusi’s forearm didn’t drive his nose back through to the back of his head and into his brain. I’m sure a fatality wouldn’t have been met with indifference but outrage and opinion wouldn’t be “divided”.
.
I’m tipping that Kaufusi won’t be protected when he plays for the Dolphins next year. I make the “NRL Triumvirate” references for a reason. Players from the Storm, the Panthers and the Roosters (Victor Radley excepted) are routinely let off or get away with fines or light sentences for the same offences that see other NRL players cop lengthy suspensions.
.
Only supporters of one of those 3 protected clubs would have no problem with that.

And the utter lack of commonsense and knowledge of the game by the bunker as well. The problem is there are too many referees that are glorified touch judges.

They have little idea about how to interpret the game. They can only make black and white decisions like is the ball out or is the player over the touchline.

The obstruction rule for example is a mess. Decisions are utterly inconsistent from one week to the next.

But they still have a NSW Cup squad compared to most of the teams ahead of them. Even the Bulldogs have a better roster than the Tigers and they are coming last.

At present there is too great a disparity between the Haves and Have Nots in the NRL. With all their rep players and with a premiership under their belt I don’t know how the Panthers are staying under the salary cap. Creative accounting perhaps.

Naden on top of James Roberts. What an angry man Quinella that is! 😂

Just think how much worse Souths would be doing if “Slippery Solly” and “Ellison the Incompetent” had succeeded in their plan to punt AJ from the club. If not for the fierce intervention of Souths members and fans AJ would be scoring tries in bunches for another club.

Pity the duo of clowns succeeded in punting club legend Adam Reynolds. Talk about one of the dumbest moves in the club’s history that ended up being the buy of the year for the Broncos.

Have you been hiding in another burrow Big Mig? I haven’t seen you much lately. Good to see you are back.

The Bunnies have their backs to the wall and we need troops on hand to help flush out the Roosters mole who is responsible for driving Bennett, Reynolds and Gagai from the club.

I think it’s Blake Solly but William W says Solly is his mate so it has to be Mark Ellison. Do you have any insider Intel to offer mate?

So if Richo was good at taking the heat who made the decisions accredited to him then William? Richo was in the same role that Ellison is now.

As for Tugger I would respect his opinion IF he is truly aware of what went on and not just assuming responsibility based on roles.

Tugger wouldn’t lie. He is a Clevo old boy, like me and former Rabbitoh Darren Maroon and the fathers of Nathan Merritt and Kyle Turner who I also went to Clevo with.

As for Tugger, he graduated the year before I started. Are you sure you haven’t fallen for slippery Solly’s bait and switch? After all, who does Mark Ellison report to? Who does he take his orders from? Solly?

I plan to go straight to the horses mouth and ask Reyno when he plays at Redcliffe oval. I’ll let you know who the real Roosters mole is then. Until then, it’s Solly unless you can reference tangible evidence to the contrary.

I read plenty of articles around the time and the quotes were from Blake Solly. Look it up. I never saw a quote from Mark Ellison. He has the title but none of the power or influence that Richo had. He is a puppet for Solly.

Congrats Alex Johnston. What a champion! So glad the same idiot (slippery Solly the Roosters mole) who forced Reynolds and Gagai out of the club didn’t get his way to punt AJ after a Rabbitohs members revolt.

I feel sorry for Dessie. He was only expressing what 12 other NRL coaches were thinking and wishing they could say. All except for the NRL Triumvirate coaches.

Has Bellamy, Cleary or Robinson ever been fined for similar comments I wonder? If they were the bill was probably picked up by NRL HQ.

Save your tears for the Dragons Tony. You know I was chasing a punchline not trying to put you down personally.

Now that the Bunnies are on a downward spiral I have to find sonething to laugh about. Nothing personal mate.

I find the omission of Jason Demetriou (aka Dumbo Big Ears) a convenient oversight that might otherwise kill your theory about rookie coaches dead in the water, Paul.

At present Dumbo Big Ears is doing his best to drive Souths out of the top 8 after a series of subpar performances that would be considered poor even by NSW Cup standards. Clearly he has no idea of how to turn this around. Souths lead the NRL in set incompletions, errors and missed tackles.

Now that he has mastered this facet of the game Bunnies supporters can only hope that JD can learn how to guide his team towards dominating positive stats as well. That would make a pleasant change for all long-suffering fans of the cardinal and myrtle.

Campbell Graham was next in line last year as he was already in the extended Blues squad. The Rabbitohs tragic form this year has not done much to advance his claim for this Origin series unfortunately.

No Latrell Mitchell, Cameron Murray, Mark Nichols and then losing JuniorTatola in the first tackle of the game to a raised elbow/forearm most teams would struggle to overcome that list of outs.

The 65% completion rate, 13 errors and 48 missed tackles are inexcusable though. So is Dumbo Big Ears complete inability to make adjustments to the side when things are going badly wrong.

To state the obvious, Cody Walker isn’t a leader. Damien Cook should be the captain in Cam Murray’s absence.

Souths were disgraceful. An absolute embarrassment. They would have even lost to the Bulldogs today.

I was just reflecting on the all Manly press conferences tonight… Des Hasler and DCE vs Brad Arthur and Clint Gutherson. That’s keeping it in the family for you. 😛

It doesn’t matter when a player begins a passing action. What matters is when and where the ball was passed and the decoy runner cannot make contact with and impede a defender who only has eyes for the man with the ball.