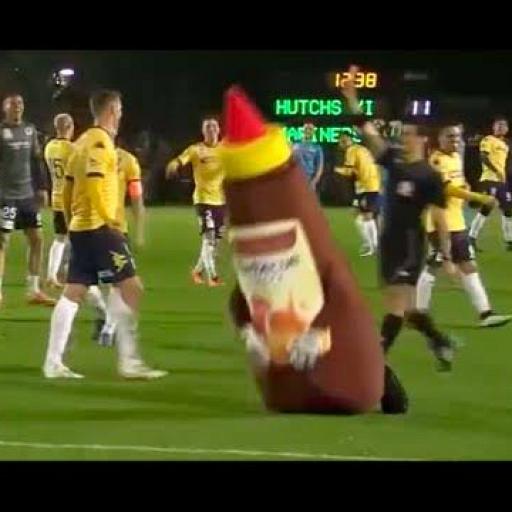 Hudddo hasn't published any posts yet

The 2 issues with Arzani are his presence over the ball, and his erratic flair. The second is a double edged sword. Because of his flair opposition find it hard to read him, the issue is so do his teammates. To combat this he needs to be given specific directions. I don’t think Dwight can offer him that.
Technically gifted, he reminds me of DDS.

Because according to the ref, the player proceeded in the direction of the ball, and the play doesn’t not take his eyes off the ball, so intent can’t be established.

The NRL thinks you are all idiots

Well noting the fact, taking the review out of it, the refs even agree that wasn’t a pen.

The NRL thinks you are all idiots

If no-one else says it I will.
Hooper doesn’t do his core role well.
His core role as a flanker is to secure the ruck, the bloke plays more like a centre, this wasn’t a problem when pocock played as you had the 2 flankers, in a flanker and an number 8, but because pococks gone were now massively deficient around the ruck.
Hooper needs to go.

Hooper is brave and elite, and changing a captain is momentous, but it's a risk worth taking

It did when it allowed Qld to play outside the rules

I’m not taking the moral high ground, if anything I’m the opposite, i believe sports and politics really shouldn’t mix, and people trying to bring political agendas in to this arguement should really avoid it because the hypocracies are astounding. All I’m saying is you can’t make the US statement without opening a big can of worms.

Blooding whatever talent we do have can be put on him, Galabadaarachchi and Hawksby still haven’t been capped.
Defenders haven’t been looked at to replace Polks even though she hasn’t been at standard for atleast 2 years now.
Every good coach knows competition breeds success, where’s the competition for places? Why wouldn’t you bring on a junior for Polks when there down by 4, what’s the worst the could happen? 7-0?

I F**** loved that game, I remember getting it for 10 bucks from the cheap bin back in the day, best tenner ive ever spent, just the right amount of difficulty.

Honestly I was the same, until the Indonesia match, saw a US Assistant and thought he was going in build a decent team. But since that abysmal failure I am off the train.

After 20 games, his choice of games to rebuild were horrid, his Asian Cup selections were horrid and we’re now 12 months from a showcase event and I’m pretty certain our depth is no where where it need to be.

The worst part out of this is the FFA seems to have done Zero homework on the bloke, the people who chose him should also be held to account.

De Vanna was the most underrated player to wear the jersey. The way Tony got rid of her just shows how unprepared he is to manage.

Well considering we’re about to have a world cup in a country where homosexuality is illegal and may be punished by stoning, I think the US will be alright.

Even 13/14 is debatable. the team was built by the previous coach Hans Löfgren, who built a team that progressed through 4 levels in 5 years, he set up the key investment strategies, and imported a bucket load of decent international players.Tony only had to keep his hands steady on the wheel, he has about as much claim to this period as Corica does to the progress FC made after Arnie.

After doing some reading of his previous managerial positions I now do not believe he is the right person for the job.

He started at Degerfors, where he barely avoided relegation, in the 2 years he was there he kept them above the drop by 2 points the first year, and one the following.

He then went to Hammersly where he took the team from 6th to last (relegation) over 3 years.

After which he ended up at Kongsviger, where he led them to relegation in 6 month.

He then managed Brage in their 2010/11 off-season, Brage avoided relegation the following year in a relegation playoff.

He then had a 9 year sabbatical from the top job coming back for GIF Sundsvall for 3 months, during a relegation year.

Now I can understand if a relegation (or there abouts) was a one off, but this is his full career as a manager. It is an indictment on the FFA board that selected him for not doing there home work, taking an Assistant US coach off what seems to be references alone.

I was addicted to FIFA97, and it’s futsal option.

I’m sorry I forgot the capital at the start of the sentence.

That’s what I said.

Munster was the only one keeping them in the game, atleast 7.

Are you seriously saying Cleary scoring 22 points is a myth?

Enough with the Socceroos niceties. Cop that, Peru!

Goodwins got something like 6 from 7 pens this year. The behich thing was just to eat time

Will take it if it comes that way but I’d rather not flip a coin to work out if we’re going through.

‘We know how hard it is’: Leckie reflects on World Cup challenge