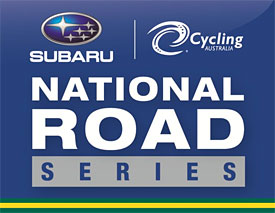 The National Road Series is a series of 14 races throughout all Australian states, featuring the country’s top individual and team cyclists.

Established by Cycling Australia, the National Road Series showcases Australia’s most promising domestic cycling talent and has been previously won by the likes of Will Clarke and Nathan Haas, both of whom have gone onto forge professional cycling careers. There are ten tour events and four one-day races on the NRS, with points being awarded for those finishing in the top ten in tour stages, and top six in one-day events.

In 2013 the National Road Series will be made up of 33 teams including top-tier teams such as Drapac, Budget Forklifts and Huon Salmon-Genesys as well as lesser-known outfits such as Target-Trek, search2retain and Charter Mason.