A brutal axing for Ewen McKenzie 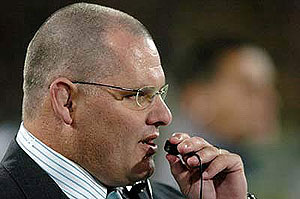 The NSWRU wrapped up the announcement that Ewen McKenzie will end his five-year coaching stint with the Waratahs as a type of celebration of his career with the Blues.

This is about as genuine as telling someone about to be executed that all the pain will be over soon.

Guess who is favoured to take over the hot seat?

In reality, despite all the code words about ‘we wish him well in the future’ and ‘he has served NSW well over a long period,’ this was as brutal an axing as the NSWRU could contrive.

A brief history of how the axe fell tells the sorry tale.

At the beginning of the season, Jim L’Estrange, the CEO of the NSWRU, told the media that McKenzie had to get the Waratahs into the Super 14 semi-finals to survive as coach.

As the lacklustre play of the Waratahs began to disenchant supporters, stories started appearing in the media that McKenzie’s days as Waratahs coach were numbered.

Journalists do not invent stories like this. They come from ‘informed’ sources. They didn’t come from the coach himself, so you don’t have to be a Rhodes Scholar to guess who the people might be who were chatting to the media.

Then stories touting the coaching talents of Todd Louden began to appear in the media.

It’s a reasonable record. But it is not a great record. Nor is it a record that suggests that in time he is the coach to take the Waratahs to a Super 14 title.

Ironically, with the bye already played, the Waratahs are only 2 points out of the top four.

But the defeatist way the Wararahs have played in the two finals matches they’ve been involved in under McKenzie suggests that, even if the team makes the finals this year, it won’t have the game plan to take it all the way.

Ewen McKenzie is a genial and intelligent man. He’s done some good things for the Waratahs.

Selecting Peter Hewat, when no one in Australian rugby was interested in this prodigiously talented player, was one of them. Stiffening up the Waratahs’ defence was another.

But I believe he has made some poor decisions:

1. He let Matt Burke go to the UK a season, possibly a couple of seasons, earlier than he should have.

2. He let Peter Hewat go to the UK before his contract time was up. He should have emulated Robbie Deans with Scott Hamilton. Deans made it a priority a couple of years ago to turn Hamilton into an All Black. Hamilton has worn the Silver Fern, but more importantly he been an immensely useful player for the Crusaders whenever they need someone to rise to the occasion. Hewat had more talent in one leg than Hamilton had in his whole body. But Hewat never became a Wallaby.

3. In five years, McKenzie was not able to develop a five-eighths who could consistently steer the Waratahs around the park to a championship victory.

4. He was too enamoured with the potential benefits that rugby league stars might bring to the Waratahs backline. None of these ‘stars’, including the over-paid Lote Tuqiri, have delivered for the Waratahs in a way commensurate with their hefty pay packages. They took the money but did not run.

5. Some great talent slipped through the hands of the Waratahs as gifted NSW players ended up playing for other franchises. Two names will suffice: Stephen Hoiles and Josh Holmes.

6. His favoured game plan for the Waratahs, especially in must-win matches, is too defensive. The Waratahs became a boring team to watch under his coaching. Boring is tolerable, just, if like the Bulls last year, you win the Super 14 championship. But it is intolerable and unacceptable in an era where sport is part of the entertainment industry if your team is as unsuccessful as the Waratahs.

7. The only time the Waratahs played sparkling and successful rugby was when Brian Melrose was the backs coach. Melrose was sacked at the end of the season. Why?

I received an email from a former Wallaby and Waratahs’ great, a man of immense ‘mana’ (a Maori word meaning leadership, prestige, charisma, and intelligence) in the rugby world as a player and coach, and in the business world.

Part of what he had to say on why Ewen McKenzie had to go is this:

‘This man is a professional coach and as such is accountable. For some years now we have witnessed a vision-less, multi-jargon, multi-cliche, rhetoric-rich display, on and off the field.

Does he ever encourage standards of excellence? Directionless, robotical, passionless, skill-less displays each week.

Comments are being made about the attack coach taking over the mantle of coach.

Surely, if this assistant had any ability, he would have been impacting on the team’s performance by now.

May I say that I, out of respect for the original Waratahs, can not allow myself to call this Super 14 team, the Waratahs …’

There is nowhere for a coach to go with this sort of review of his performance.

I suggested to the author of this strong and passionate attack that he must ‘keep the faith’ as far as the Waratahs are concerned.

But with a new coach in 2009. And hopefully also the traditional and successful famous Waratahs running style of play.