Crushed in the dust, but Socceroos limp on 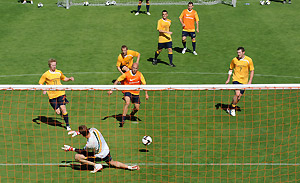 His side might have ripped up the script and played out their own Escape from Alcatraz in Manama, but at least Pim Verbeek is man enough to own up to the fact that Australia was found wanting on Thursday morning in its World Cup qualifier against Bahrain.

Tom Smithies, writing for News Limited, slammed Verbeek’s team as having “played without structure, intelligence or style” and described Mark Bresciano’s lucky winner against the run of play as “grand larceny”.

Uncharacteristically brutal for Australian football reportage in the dailies but utterly correct.

It was a shitty effort all round.

I am no oracle, but I take some satisfaction from seeing the man I pinpointed as a major threat to the Socceroos, Jaycee John Okwunwanne, emerge from the 90 minutes as a runaway man-of-the-match.

He missed two gilt-edged chances, one from a cross from Salman Isa early in the second half, another right at the death from his own ingenuity, but throughout the match he showed a level of fluidity and mastery of distribution that reminded me of Ahmed Mubarak Al Mahaijri of Oman (he destroyed Australia in Bangkok in 2007), and the raw technical ability of a Sulley Muntari (if not the shooting and pay-packet).

Since posting my blog on Wednesday, I’ve had a number of people ask me why we can’t get a player like Jaycee John in the A-League.

Beats me as much as you.

I bet your average good-looking, charismatic young Nigerian footballer would stump for the sights and sounds of Sydney over Bahrain any day – even if the money was better in the Gulf.

(A Jaycee John playing for Sydney FC is exactly what would pull in the punters; but I’m not going to rehash that argument here. I’ve done it to many times. But the math is pretty simple: skill + flair + pace = entertainment. Kosmina? Kemeny? Lowy? Are you listening?)

What also struck me from this game is that Verbeek can no longer go on justifying his selection of David Carney, who is horribly out of sorts and repeatedly gave the Bahrainis more joy through turnovers and stray passing than a pin-up’s striptease at a Nevada brothel.

Enough is enough: if you don’t play for your club you should have no business playing for the Socceroos, no matter who you are.

Carle has played 17 times for Palace’s first team this season, scoring three goals and leading the team in assists.

Carney has made one start and done not much else.

Yes, they play in different positions, and Carle has been uncharacteristically stuck in Palace’s reserves the past couple of games while trying to fight his back into first-team reckoning, but I believe the principle of fairness – and applying it – is just as important for the welfare of the team looking ahead to South Africa 2010.

Australia look virtual dead certs to make it now, with nine points from a possible nine so far, and for that Verbeek is owed much credit, but when our team is depleted through injuries to key players, like it was in Manama, it looks defensively brittle, short of inventiveness and is devoid of penetration.

We better pray Verbeek has got his full complement of players when we get to Africa, because otherwise we could be set for a very short stay.