Community support is the key to J. League crowds 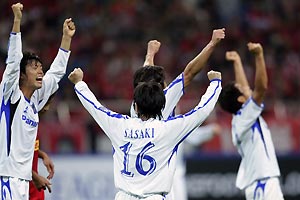 2008 was a bumper year for crowds in the J. League. On average, a total of 19,278 fans piled through the gates to watch a game. Only in 1994 did the J. League attract larger crowds. The big difference back then was that the top flight contained just twelve clubs, compared to the eighteen that make up J1 today.

Of the founding members of the J. League, perhaps none has experienced as dramatic a resurgence in attendance as Shimizu S-Pulse.

Last season Shimizu attracted an average of 16,599 fans to their 20,339 capacity Nihondaira Stadium. Their council-owned ground was, on average, 82% full.

Much of Shimizu’s success in reconnecting with their fans can be traced to grassroots participation.

Last week I had lunch with Shimizu’s Press Officer Naoko Umagoe, and I asked her about the numerous youth training centres dotted throughout the region.

“I think this is a very important thing. For example, in Europe, a football club is a pyramid. If people want to build a strong team, we have to develop the grassroots of the club.”

Not only do the youth training centres help uncover the next generation of S-Pulse players, but as Umagoe points out, they also help to convert young footballers into fans.

With S-Pulse once again the hottest ticket in town, club officials are now lobbying Shizuoka Council to have the capacity of Nihondaira Stadium increased.

Given that ticket sales account for 30% of the club’s total revenue, it’s an obvious request.

The club have also raised funds by selling the matchday naming rights to the ground. From 2009 onwards, the picturesque venue will be known as “Outsourcing Stadium Nihondaira.”

Some of the reputed 360 million yen raised has been used to lure former Norwegian international and ex-Nagoya Grampus striker Frode Johnsen to Shimizu.

The sale of naming rights may represent one of the more unpleasant aspects of modern football, but S-Pulse officials are keen to keep their fans onside.

In 2007, they made the decision to cease playing marquee home games at the region’s World Cup stadium.

Not surprisingly, that doesn’t sit well with S-Pulse supporters.

“Shimizu supporters have strong opinions that S-Pulse players have to play at Nihondaira,” says Umagoe – who holds a Football Industries MBA from the University of Liverpool.

That Shimizu are so in tune with their local community is not surprising, given that of the original ten founding members of the J. League, S-Pulse were the only club to start from scratch.

All of the other clubs had previously existed as the company team of a major Japanese corporation.

When Japan’s economic bubble burst in the late nineties, S-Pulse found itself on the brink of insolvency. Local logistics company Suzuyo stepped in, and both club and company have found the arrangement mutually beneficial.

Suzuyo are now synonymous with Shimizu S-Pulse, but as Umagoe points out, several other clubs have a much broader base of sponsors.

She cites the example of Kyushu-based club Oita Trinita, who attract around 700 sponsors – most of them local. Such small, locally-based sponsors could prove crucial in these troubled economic times.

So too could council support.

Socceroos fans making the trip to Yokohama for Australia’s upcoming World Cup qualifier with Japan will be greeted by numerous Yokohama F. Marinos motifs around Shin-Yokohama station, with the local council leaving no doubt as to which club they support – much to the annoyance of Marinos’ cross-town rivals Yokohama FC.

Comparing attendances figures in the J. League to those of Australia’s fledgling A-League is a moot point, with the population of Japan more than six times that of Australia’s.

Yet with some A-League clubs struggling to attract fans through the turnstiles – a fact-finding mission to Shimizu shouldn’t be out of the question.