It's all grey for the inexperienced All Blacks 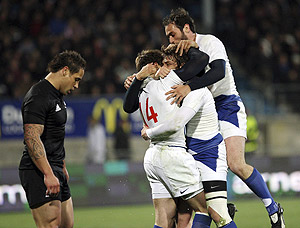 France, once again, created a huge surprise when what they thought was their number 2 team on paper defeated an inexperienced All Blacks side on a cold evening at Dunedin 27 – 22.

The scoreline flattered the All Blacks who played more like the All Greys.

Especially in the first half the New Zealand national side was slow and passive at the rucks and mauls, inaccurate with their tackling, lacking in nous at the scrums, leaden-footed and lacking in options in the halves, and seemingly without real pace on the wings.

The grey All Blacks.

Down 17 – 3 at half-time (the same score line, ironically, at Canberra but with the Wallabies in the lead against Italy), the All Blacks focused their play better and struggled their way to 17 – 17, with a strong chance to win a now unexpected – and undeserved up to this stage – victory.

But here a fatal flaw in New Zealand rugby revealed itself once again, as it did at Cardiff in 2007 in the quarter-final of the Rugby World Cup tournament. That flaw is a chronic inability to finish off a side that has been dominate but is slipping in a calm and methodical manner.

Instead of taking charge of the match at this juncture and putting the All Blacks into a position to lay seige on the French try line, Stephen Donald opted for a short 22, and just got away with it with the All Blacks being awarded a fortuitous penalty.

Then when the All Blacks did finally get field position, they did not have any plays to break the French tight, almost-offside defensive line except the risky kick over the top.

The psychology of the moment given the French outstanding defensive effort (152 tackles made, only 13 missed compared with the All Blacks (83 and 17 missed tackles) was to drop a goal. But where was the captain’s call for this? Or the five-eighths call?

And perhaps just as importantly, did the All Blacks have a system for a field goal attempt?

The point about a field goal at this stage of this particular game is that France was essentially living off New Zealand turnovers and mistakes. Once the All Blacks were in front, France would then have to make the game something that was beyond them after the first 30 minutes when they scored 17 points.

As it was France led throughout the match, except when the score was tied at 17 – 17. The All Blacks made mistakes like Luke McAlister’s pass to the French fullback Metard who ran away for a 50m try.

Even at the end of the match, with the All Blacks needing a try to draw and a converted try to win, the wrong call was made with the last lineout throw. Instead of nailing the throw and taking it from there, the ball was thrown long, too long in fact and was knocked on.

Phil Dine, an academic working in Ireland, has written a fascinating essay on French rugby called ‘The Great Exception: Reflection on a Century of French Rugby Genius.’ He argues that there are two strands in the distinctive French approach, le beau jeu (the beautiful game) and le jeu dur (the hard game).

The beautiful game comes from Paris and expresses itself in visionary and daring attacking play. The hard game is basically the style of the heartland of French rugby, the south-west, ‘l’Ovalie,’ the region of the oval ball, where an uncompromising dedication to winning is the means and the ends of victory.

Either of these approaches when played well make France a formidable side on the given day. When these two approaches are meshed as they were in the first 30 of the Dunedin Test, France becomes almost unbeatable.

The merit of the victory, France’s first in New Zealand since 1994 when both Tests were won, is that in the professional era the All Blacks had played, up to Saturday, 37 Tests in early-season matches, for one loss. That loss was a 2-point defeat to England in 2003, the side that went on to win the Rugby World Cup a few months later.

The record for the All Blacks now is 2 losses out of 38, with France getting its best players back for the Wellington Test after their recent club final.