Our World Cup bid launched, now let's back it 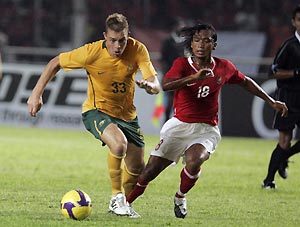 It’s official, we are in the running for the 2018 and 2022 World Cup finals. The flash launch reinforced why Australia is well positioned to stage the biggest sporting event in the world. It’s now time for a united vision and for the public to get behind the bid.

The bid has the support of both sides of politics and there seemed to be genuine confidence and expectation from the launch.

It was bold but appropriate affair.

There was no corny celebrity cameos or the like.

The focus was rightly on what Australia can offer to the world, focusing on our closeness to Asia, place within the Asian Football Confederation, where more football fans live than in any other continent and our successful record of staging major events.

Malcolm Turnbull’s cringe worthy use of the term ‘soccer’ aside, this was proof of footballs’ successful journey to acceptance.

This was a common theme emerging; just how far the code has come in such a short space of time.

It wasn’t that long ago that the code was wrecked by instability and its foundations were so unstable that it required such drastic intervention and revolution to sort itself out. This deserves stressing.

As Lucas Neill said, a decade ago Australia football was a very different place and in that short space of time we have emerged with the foundations of a strong league, our national side has qualified for successive World Cups, grassroots football is receiving significant support and there are signs that the old establishments will be integrated into the new structures. And now we are bidding for a World Cup on our shores.

It’s remarkable progression and perhaps this experience will prepare the football community well for the challenge ahead.

The next step is not only working with state governments to settle the stadia issue but also winning the public over.

It’s not surprising the launch felt like a selling campaign to the Australian public.

Many need convincing as there is still much scepticism about our chances, not helped by the doubts about stadia but also scepticism from the usual sources about the game’s worthiness in Australia.

It needs to be reinforced, what a World Cup in Australia would mean to not only the code but also Australia as a whole, culturally and economically.

The competition is strong, especially from the US for 2022, our most likely rival in the bidding process.

It’ll be a fascinating duel between two nations who share a similar historical indifference toward the game.

We need to show FIFA and the global community we want this World Cup and its lasting legacy will be cementing the game in the hearts and minds for current and future generations alike.

December 2010 looms large and the hard work is just beginning.

We wait and hope.