This is a defining Test for the All Blacks 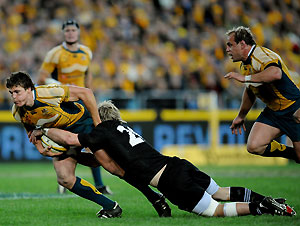 Australian rugby union player Luke Burgess is tackled by Jimmy Cowan from New Zealand in the first match of the Bledisloe Cup series in Sydney on Saturday, July 26, 2008. The Wallabies beat the All Blacks 34-19. AAP Image/Paul Miller

How refreshing it is not to have New Zealand installed as stone cold favourites for once. How comforting it must be for the All Blacks themselves not to be burdened with excessive expectations against the Wallabies.

Sure, they are under a certain amount of pressure after some rusty stuff against two teams – France and Italy – whose primary intent was only on stopping them.

The Wallabies are different.

They want to win and therefore they will chance their arm rather more. This may actually make life for the All Blacks a little easier as they go about hunting for turnovers.

Nobody, however, will be underestimating the 2009 Wallaby team. If anything the Wallabies should be favourites here. They have a more settled squad and their younger players are all match winners.

They may not have Lote Tuqiri anymore but Lote has been as much of a liability as a strike weapon in recent times. The likes of Lachie Turner, Berrick Barnes, Drew Mitchell, James O’Connor and Luke Burgess aren’t just good runners. They may not be very big as modern backs go but are all exceptionally quick, very good defenders and very smart.

O’Connor in particular is the closest thing to Christian Cullen that many of us have seen. He is clearly destined to become one of the rugby world’s superstars if his feet stay on the ground – and they will, surely, because he’s a New Zealander.

Two or three years ago there would be loud sniggering on this side of the Tasman whenever the Wallaby front row was mentioned. There isn’t now. The same crowd, Ben Robinson, Al Baxter, Stephen Moore and Ben Alexander are still there and nobody laughs at them anymore.

They are older, tougher and technically better, a match for anyone these days. George Smith has found a second wind. So has the remarkable Nathan Sharpe. James Horwill is now one of the best all round locks in the world and Australia has a real find in Richard Brown at blindside.

The Wallabies have depth at loose forward, particularly at No 7 in sharp contrast to New Zealand.

This is a formidable outfit, particularly when you look at their all-round rugby intelligence and their leadership qualities. There’s Mortlock , there’s Giteau, now the consummate ringmaster. There’s Sharpe, Smith, Dean Mumm and Phil Waugh, all of them strong personalities and able leaders.

By contrast the All Blacks have struggling for decision-makers.

Happily that problem has been eased somewhat with the return of McCaw and So’oialo and with Conrad Smith restored at centre. They are going to need all that leadership and more to master the Wallabies. And they are going to need the kind of inspirational sleight of hand that only a few, Sivivatu in particular, can bring when all the doors seem to be closed.

This will be the defining test for the 2009 All Blacks. If they lose the alarm bells will toll. If they win people will ask why they can’t win all the time? The former is unthinkable. The latter is unbearable.

Chris Laidlaw is a former All Black great halfback