Memo to A-League groundsmen; time to roll out the carpet 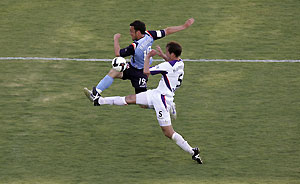 Sydney's Mark Bridge (left) and Perth's Jamie Harnwell in action during Round 16 of the Hyundai A-League between Sydney FC and Perth Glory in Sydney, Sunday, Dec. 21, 2008. AAP Image/Jenny Evans

It’s an image that lives long in the memory. In May 2005, more than two months before the pre-season competition for the inaugural A-League season, the FFA gave us a sneak-peak into its new world with a double-header at Gosford’s Bluetongue Stadium, part of its process of deciding Australia’s participant at the Oceania club championship.

Most will remember it as the day Nik Mrdja snapped Andrew Durante’s leg during the second match between the Mariners and the Jets. That memory was sickening.

But it was another image, that day, which warmed the heart.

It came at half-time in the first game between Sydney FC and Queensland Roar, and it didn’t involve any player or a football.

It was the sight of the Bluetongue groundsmen, armed with a spading fork, out prodding and patting down the lush green surface. It happened again ahead of the second game, and then at half-time once more.

It was ‘new football’ and a new professional attitude towards to the quality of the canvass, or so it seemed.

Little wonder the back-of-the-net.com reporter that day rated the pitch a nine out of ten.

As I watched the groundsman prod-around, gob-smacked, my mind went back to days of watching NSL matches at places like Leichhardt and Belmore Oval, and Parramatta Stadium, which at times resembled Bondi beach, such was the amount of sand dumped on them.

While there were some very goods ones, especially at football-only places like Marconi and Hindmarsh, overall, the pitches and stadiums weren’t great.

One of my pet hates growing up was the sub-standard treatment (or non-treatment) afforded the game by ground-staff across the country.

How many big games – grand finals and Socceroos internationals – do you remember being played on fields where line-markings and sponsorship logos were everywhere? What chance did the game have at club level?

Naturally, my hope ahead of the A-League launch was that the carpet would be rolled out, across the board, a point I made in an early email to John O’Neill and Matt Carroll.

Surfaces in the inaugural season, I thought, were pretty good, especially in the context of where the game had been.

But things have steadily declined, and last season even Bluetongue resembled a patchwork quilt.

Elsewhere, across the multi-purpose facilities like Suncorp, Docklands, Westpac and SFS, the game continues to have to work alongside the likes of Andre Rieu, the two rugby codes and AFL.

It’s a fine balancing act. On the one hand the FFA wants to enhance its package by playing in the best all-seater stadiums, with excellent spectator and hospitality facilities.

Yet the bumpy surfaces often sell the players, managers, and fans short, as the quality of games suffers.

It’s one thing to be able to get into a modern stadium and find a comfortable seat, but most fans want to see good football on good pitches, and there’s no better way to build a brand than by enhancing the on-field product.

And to do that, players must be given the best surfaces, at training and on match-day.

As the governing body tries to encourage more and more ball-playing through its introduction of small sided games and the national curriculum, it would do well to take in the words of the respected Roy Hodgson, who takes a calculated stab at the inferior state of our pitches just over three minutes into this grab, even if he bundles Docklands and Robina into the same ‘AFL’ basket.

Naturally, things should improve over time and with the introduction of stadia like the rectangular one in Melbourne, but the technical heads at FFA and out in club-land would do well to stay in the ear of ground administrators.

And fans, paying a decent dollar to attend, should also maintain the rage.

Last night, for example, I was back at Belmore Oval for the first time in a while. The game between Sydney FC and Sydney Olympic was an eye-sore.

You won’t be surprised to learn the surface was a shocker.