How much longer can Neill hold out? 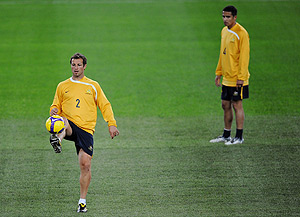 Socceroo Tim Cahill (r) watches as Lucas Neill kicks the ball during a team training session ahead of tomorrow's World Cup qualifying match against Bahrain in Sydney on Tuesday, June 9, 2009. Australia qualified for the 2010 World Cup in South Africa with a 0-0 draw against Qatar last Saturday. AAP Image/Paul Miller

It has not been a good week for Lucas Neill. In fact, it’s been a terrible few months for the Australia captain. But I’m sure having his name dragged into the Michael McGurk story tops it all off.

What possible relevance Neill has to the investigation into the Sydney businessman’s murder and why we should be privy to such information in the first place is something I hope a future episode of Media Watch examines.

Neill didn’t deserve having his face plastered across the front pages of the dailies just because he once met McGurk. Should the barista who made McGurk’s morning coffee or the owner of the laundromat who dry-cleaned his shirts also be outed in the press?

What Neill should be excoriated for, brutally, is his shirking of responsibility as captain of the Socceroos. I’ve done it a few times in recent weeks and I’m happy to do it again because he deserves to be hammered. Whether you regard it as tedious is not really a concern.

His personal motives have already seen him miss two important matches for the national side and there could be a third, if he does not have a club by October. At the rate he is going, that is firming as a distinct possibility.

Already this week Neill was going to Atletico Madrid then he was not.

Then there was Réal Zaragoza, but they turned around and said he had priced himself out of a deal. Now Sunderland, the mighty Sunderland, is back in the picture, offering him $76,000 a week. And yet he still hasn’t signed on the dotted line. He hasn’t played a competitive match since 17 June.

What on earth is he stalling for? But more importantly, should he be allowed to continue stalling?

In my opinion, no. And for that Pim Verbeek has to take some heat.

Comments such as “I will start to get worried when he is not playing his games in April and May” are really rather amazing.

This is our national captain, the most important man in our back four in the coach’s estimation, the leader of the team, the marshal of our defence, and yet Verbeek tolerates his withering because he’s “waiting for the right club to sign the right deal”.

Sunderland is the right club? Apart from money, what the hell can they offer? I had to laugh when I saw a headline at Goal.com: REPORT: FORMER WEST HAM DEFENDER LUCAS NEILL WANTS MORE MONEY.

Raging favourite for Bleedingly Obvious Statement of the Year?

Yet Neill’s agent, Paddy Dominguez, has suggested that his client is not financially motivated. It’s hard to see it any other way.

Neill’s search for the “right club” and the “the right deal” is compromising our World Cup hopes. There are only two matches other than the Netherlands friendly scheduled at the present time between now and the end of the year, two Asian Cup qualifiers against Oman, which Neill, even if he is playing for a club by then, will likely miss, as Verbeek is bound to select A-League players only.

That means if he hasn’t found a club by October and missed the Oranje game, he won’t play another international in 2009.

That, by any measure, is not what one should expect of the captain of a national football team. Especially so with a World Cup campaign just around the corner and especially so again when his side was so completely outplayed by Korea Republic and the defence is in conspicuously in need of major surgery.

Pim, get on the phone and order Neill to join a club. Wasting more time is not a luxury our nation can afford.