Verbeek was right to spike McDonald 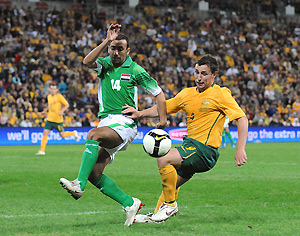 So Pim Verbeek has cut Scott McDonald adrift. Good. It was overdue. Which is not to say McDonald is not a quality player – judged on his profile and goals he’s still our best sharpshooter in Europe.

But overall, in his 15 international appearances to date, he’s not performed to the standard required of a national-team striker and never quite come across as a player who looks like he’s comfortable in the team.

Whether that is just confidence or how he’s been played in Verbeek’s system is inconsequential. McDonald needs to own up to the fact he simply hasn’t been good enough, despite plenty of chances to acclimatise and make the position his own.

The coach isn’t about to change his system to fit around the player. Verbeek’s going to South Africa 2010 doing it his way.

So how McDonald responds to the challenge of being left out is now up to him. His World Cup chances aren’t shot but they have definitely been dealt a blow no matter how much Verbeek tries to play it down as a result of having “plenty of options”.

In the meantime it’s time for other strikers to step up and put him out of the picture completely.

Many moons ago when he was still playing in the A-League I tipped Bruce Djite for big things but his adventure in Turkey has hardly set the world alight and this would explain why his opportunities with the Socceroos have been so limited.

Djite has a physical presence McDonald does not. McDonald is more of a Tim Cahill-like player, a rover who can sniff a goal amid chaos. A second-ball “cleaner”, if you will. Djite offers a bit more: tall, strong, able to hold the ball up and play others in, as we saw him do so frequently with Nathan Burns at Adelaide United.

A genuine target man, albeit one who, because of his youth and inexperience, still has a long way to go in being the finished product.

Verbeek’s mixed things up a bit by calling in Djite while ignoring Nikita Rukavytsya, even though Ruka’s arguably in better form, scoring in Cup games in Holland but not breaking into FC Twente’s first team. On the weekend Djite played his first SüperLig game for Genclerbirligi since August, coming on as a second-half sub.

In reality it’s going to come down to Djite vs Rukavytsya for a berth in South Africa so Verbeek is simply giving both players a decent platform to impress.

We’ll likely see Djite dropped for the next game in the New Year and Ruka called in.

(Sorry, parochialists: Archie Thompson, Mark Bridge and Alex Brosque have virtually zero chance of making the final 23-man squad for the World Cup, despite Verbeek’s mentioning of the trio in a press conference this week.)
So is Verbeek compromising our World Cup interests by taking such a gamble in dropping McDonald?

In my view, quite the opposite. In fact it’s one of the bravest things he’s done so far and bravery is not a word frequently used in connection to our national-team manager.

Though it’s late in the piece it’s better he start taking risks now than never. If he can take a few more we might just stand a chance come June.