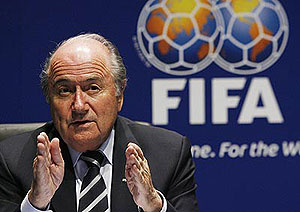 Republic of Ireland assistant coach Liam Brady has called Sepp Blatter an “embarrassment” to FIFA after the most powerful man in world football revealed this week he’d been petitioned by the Irish to have them join 32 already-qualified nations in South Africa.

More indiscreet, in my view, than an embarrassment and the Irish idea got what it deserved: knocked on the head.

What Blatter most clearly is, however, is a politician as two-faced as they come.

Not so long ago, in the wake of the Hand of Gaul affair, Blatter went public to tell the world he’d called Henry to offer him his support, comparing the French player’s indiscretion to some of his old antics as a player in Switzerland: “[Henry] was honest by admitting that he did use his hand, but it wasn’t his responsibility to tell the referee.

When I was a centre forward in my junior team, I definitely gained an advantage by pulling a defender’s jersey in order to score a goal. And I didn’t go and see the referee to tell him about it.”

Essentially, then, telling Henry he would have done the same thing if he had ever been in a similar position, as would most other park footballers.

But just three days later, following virulent criticism of his comments, he has announced Henry will be investigated by FIFA’s disciplinary committee for the double-handball at the Stade de France and described Henry’s actions as “blatant unfair play… seen all around the world. I don’t know the outcome of the disciplinary committee. Let them make the decision. Fair play must be maintained in our game.”

A complete 360-degree turn. If it was so blatant (a subject of debate) why hasn’t the referee Martin Hansson and his assistants been called to account?

If it really mattered what the world thinks why wasn’t a replay ordered when the world was clamouring for it, despite what the
rules state? And if Blatter cared a fig for due process why is he determining Henry’s guilt even before the disciplinary committee has had a chance to sit down and review the evidence?

The truth is Blatter is sensing there will be dark moral clouds over this next World Cup unless he and his organisation are seen to punish the French and specifically Henry. This on top of the severe damage the affair has done to FIFA’s own credibility and Blatter’s leadership by exposing the emptiness of his rhetoric.

Henry, basically, is being made an example of. But the punishment, whatever it may be, has come too late. Ireland is out of the World Cup due to French trickery and the tournament next June will be immeasurably tarnished because of it.

If FIFA wanted to make amends to the football world its executive committee this week would have agreed to basic improvements in the way the game is run: like having two goal-line assistant referees, like introducing a modicum of video technology. But yet again they failed to take the initiative when the opportunity to make a big statement was there for the taking.

Henry might be a cheat but FIFA is cheating us all out of having a better World Cup.