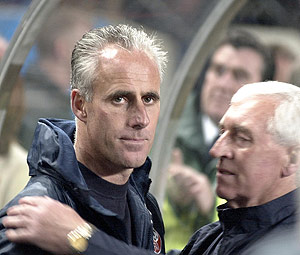 The palaver surrounding Mick McCarthy’s decision to field a virtual reserves team for the match against Manchester United and the FA’s flogging of him with a proverbial lettuce leaf as punishment has raised an interesting issue that seems obvious but is rarely spoken about: what do clubs exist for?

McCarthy defended his axing of ten players from the side that had beaten Tottenham three days previously by suggesting it was the best possible line-up he could have selected because the nominal first XI were simply too fagged with exhaustion.

In reality, however, he was resting them because this weekend’s match against Burnley is considered winnable and crucial for Wolves’ “staying up”. He wants the same side that defeated Spurs 1-0 at White Hart Lane to be refreshed and raring to go at Molineux.

“Decisions I make to keep this club up will only be judged further down the line,” he said. “I would hope fans understand [what happened at Old Trafford, where Wolves were thrashed 3-0] because my decisions will judge whether we stay in the Premier League.”

And chief executive Jez Moxey has backed him, admitting he was “surprised by Mick’s team selection” but his manager “is very cognisant of what the fans want and I think what they want most is to stay in the Premier League.”

That, however, appears not to be the case, judging from the tenor of comments made by Wolves supporters. Arthur Williams, president of the North West Wolves fans’ group, told the BBC “there was something to be gained from that match on Tuesday” and that he and the other 3000 fans who made the trip to Old Trafford and forked out £42 each for a seat deserved much more from their club.

“My first reaction when I saw ten changes and players playing out of position was, I thought, grossly disrespectful.”

Many are now demanding refunds, which the club is refusing to pay.

In my view, McCarthy and the club are in the wrong.

What is the point of Premiership survival if you also alienate your supporter base by giving up the idea of winning matches even before they’re played?

Much of what makes football fans so loyal and passionate, especially those who follow smaller clubs, is the promise that one day they’re going to live out their wildest dreams and see their clubs beat the Manchester Uniteds, Liverpools and Chelseas of this world. They want to see their spare-parts teams take it up to the very best and dare to dream.

That’s what McCarthy, Moxey and the rest of the Wolves hoi polloi just don’t appreciate.

While “staying up” is its own kind of title race for Wolves and other clubs in the drop zone, one just as transfixing and exciting as the battle between the Big Four and with its own attendant financial rewards, it should never take priority over the simple motivation of trying to win.

That should be the mindset all coaches and all players in the Premier League take into every match, no matter the opposition and no matter what’s at stake.

Otherwise what is the point of supporting a team?

Clubs exist because of people and for the people, nothing else. When they start acting like they exist for something else, like Wolves did this week, you know a little bit of football’s soul has been lost.