Matty Johns lands a few blows, on TV this time 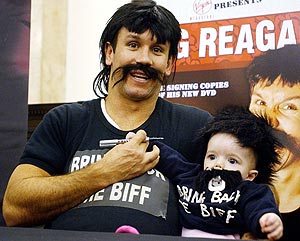 First, some background. I’m probably a fairly unlikely candidate to review such a program. I haven’t watched its rival The Footy Show for years and normally view ‘Family Entertainment’ in the same way I view ‘Family Restaurants’. No thanks.

But let’s face it, there is some interest.

Here is a bloke that less than twelve months ago was being told by the court of public opinion that he’d never work again and would possibly have to move overseas. Forget forgiveness, you just want to dig and keep digging.

So the ‘never work again’ actually becomes a promotion where you go from being a panellist to hosting your own show. You have to love the way a celebrity-obsessed culture has a collective memory of about seven seconds.

But the wagons have moved on, so what about the show itself.

Well, I was relieved when Johns got over what appeared to be some initial nerves to use the phrase “champion bloke”. That utterance made it clear I was watching a rugby league chat show.

Of course, the show will inevitably be compared with Nine’s Footy Show, and while it looked like Seven had opened the war chest to give the show a slicker production value, Johns and Webcke both looked nervous (Webcke proclaiming the Sea Eagles would be back on track when they in fact play in Gosford, probably illustrating it best) when compared with the hugely experienced duo of Sterling and Vautin.

The controversy corner segment was a winner, with Willie Mason (a top guest to have first up) happy to play his role of pantomime villain and Paul Kent asking questions which varied from the usual “how good is he going” line you get on such programs.

The current players’ involvement didn’t change much from their usual segments, although a quiz in which players help an audience member answer questions about their own home is a new low for the TV quiz format.

John’s comic characters only left me remembering Reg Reagan, but I’m sure the school yards will be re-telling each joke tomorrow, while Jason Stevens looks to fill the role of universally derided panel member.

Truth be told, I watched the whole thing just to see what the public at large was making of Johns’ public return. So maybe the worm would have been helpful.

It’s unlikely I’ll be back, but that was always the case.

The big question will be whether it can differentiate itself from Nine’s show to be a viewing alternative or whether Seven’s investment back in rugby league is setting itself up for a whole bigger ball game down the track.