Waratahs and Brumbies are scrum bludgers 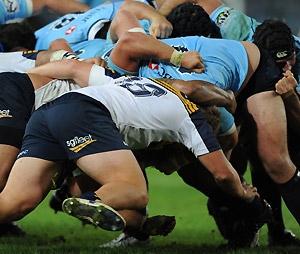 The Brumbies and the Waratahs pack down. AAP Image/Dean Lewins

There was a great deal of criticism of Steve Walsh, and I was one of the pack making the accusations, about his poor handling of the scrums. It seemed to take an eternity to get a clean scrum, as first one side, and then the other, would go down in a slow collapse as if the front rows were shot horses.

But evidence has come forward that suggests that Walsh was not the culprit. These statistics make the overwhelming case that the NSW Waratahs and the ACT Brumbies field packs that are serial bludgers.

Here are the official statistics on average scrum completions in this year’s Super 14 tournament.

After 10 rounds in the tournament, the Waratahs have the worst average scrum completion of 39 per cent. The Brumbies are not much better.

The tournament average is 53 per cent. But when you take the Waratahs and the Brumbies out of the statistics, the average moves out to 57 per cent.

Last Saturday, the two teams excelled themselves in bludging, which is why, perhaps, Walsh’s performance at scrum time received some criticism. The Waratahs and the Brumbies averaged only 20 per cent of their completion: one in five scrums that did not need to be reset.

There is clearly a need for the Waratahs and the Brumbies to get their scrums right before referees start penalising them on (justifiable) suspicion when a scrum collapses.

Wallaby selector Robbie Deans will no doubt find these statistics telling evidence of being extremely careful about selecting props from the Waratahs and the Brumbies.

Finally, there remains an overall problem with setting the scrums that slowing down the calls has only mitigated.

My answer to the problem is three-fold: first, reduce the calls to three rather than four. These should be Touch, Pause, SCRUM. There should only be a slight pause between Pause and Scrum.

Scrum is a much better engagement call than EN-GAGE because it is one syllable. Packs can make their hit as soon as they hear the S sound. Right now they sometimes get penalised for moving on the EN sound, with some referees wanting any move forward to be delayed until the GAGE sound is made.

Two, referees should place a hand on the back of one prop from either pack. As he calls scrum he moves both packs forward. Jonathan Kaplan sometimes does this, and he gets good scrums from the trick.

Three, halfbacks should be penalised for any delay in feeding, as this is often a trick used to cover up a poor hit by their front row.

Back to the Waratahs and Brumbies now.

These statistics are going to be given wide coverage. It will be fascinating to see whether referees start to penalise the two sides the way they did for some years when the Wallaby front row was deemed to be one of the jokes of world rugby.