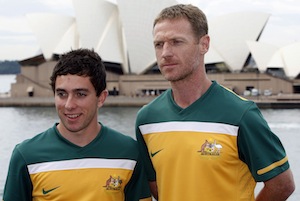 The Socceroos face the New Zealand All Whites at the MCG tonight in their farewell match at home before heading to South Africa for their second consecutive World Cup. Join Tony Tannous here from 7:30pm EST for a live analysis of the match.

The match is the last opportunity for Socceroos players to impress Pim Verbeek, who will trim the squad by cutting eight players from the current 31-man squad before they jet off to South Africa.

But this game will be more than just a friendly exercise with trans-Tasman pride at stake against our biggest sporting rivals.

Part celebration to commemorate the qualification of both New Zealand and Australia to the same World Cup finals in history, the match will also boast a large number of players from the A-League.

Key questions to be answered are:

– Which players will impress and book their ticket to South Africa?

– Will there be angst between the two teams?

– And how many fans will turn up to the ‘G’ to farewell the Socceroos?

Join Tony Tannous from 7:30pm EST and comment as the game unfolds. Have an iPhone? Follow the blog and post directly from The Roar’s iPhone app.