More than history from Dragons, Roosters in GF 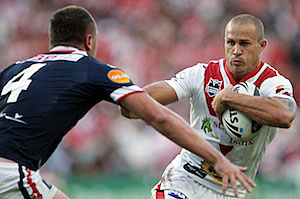 History will always be on offer in an NRL grand final, but St George Illawarra Dragons and the Sydney Roosters offer more than most clubs. Sunday at ANZ Stadium, in front of 82,000 fans, will also be the 31-year wait versus the greatest turnaround in 76 years.

Few Dragons fans or officials would have anticipated, as they celebrated the 1979 title, they’d watch the club lose five grand finals, including one they led 14-0 at halftime as a merged venture in 1999.

Perhaps fewer at the Roosters would have believed they’d be a chance of becoming the first club since Western Suburbs in 1934 to win a premiership 12 months after walking away with a wooden spoon.

A place in the record books is one thing, the personal triumphs will be another.

“All the hard work, all the good times, all the bad times – it’s justice.”

The sides have avoided major dramas in the lead-up to the biggest day of their year, with Carney (high tackle) and Dragons pair Jeremy Smith (dangerous contact) and Dean Young (alleged on-field abuse) dodging suspension.

Neither side has major injury worries with only Roosters winger Phil Graham (pectoral) unlikely to be risked and Dragons Michael Weyman (groin) and Jarrod Saffy (quad) set to play.

The Dragons have done plenty already to throw off their “chokers” tag by making the big one, but the greater pressure is arguably on them as they look to employ their stifling defence against the more flamboyant Roosters.

“We’re different (to them),” Smith said.

“That’s the danger for them. If we happen to do that we could trouble them.”

The minor premiers go in as $1.70 favourites, against $2.10 for the Roosters, who finished the season sixth.

The first-placed side has won four from nine in grand finals since the NRL began in 1998, while a side finishing sixth has never won the decider.

“All I know is we’ve played them twice this year and we’ve had a proper go at them,” Smith said.

“Both times we came up short so we’re getting a third shot at it on the biggest day of all, to have a crack at it, to take it to them.

“As one of my friends suggested to me, be bold.

“If you’ve got good energy on the day, if you’ve got lots of it, you’re a chance of winning.

“If you get there without energy, you’re in trouble.”

Showers and possible isolated thunderstorms are forecast for Sydney, with a maximum temperature of 21 degrees.