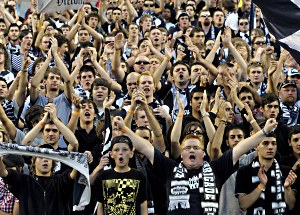 There’s nothing quite like being at a Football game, having your team score a screaming goal, and launching into a chant for the team or player. Of course, it’s even more fun to get creative and chant at the other team and their players. What’s your favourite chant?

A selection of the finest football chants (the British seem to carry the bag here – can you even the score?)

“There’s only one Emile Heskey, one Emile Heskey. He used to be sh-te, but now he’s all right, Walking in a Heskey wonderland” – England supporters cheering, for once, for Heskey.

“There’s only two Andy Gorams, two Andry Gorams…” Back in the day, Rangers goalkeeper Andy Goram didn’t get much sympathy from away fans at the Ibrox after he was diagnosed with a mild form of schizophrenia

“He’s fat, he’s round, he’s sold your f–king ground, Al Fayed, Al Fayed…” Sung by the visiting supporters, this can be heard at every match at Fulham’s Craven Cottage.

“You’re shish, and you know you are!” Sung by Chelsea fans at Stamford Bridge, when their side hosted Turkish League side Galatasaray in the UEFA Cup

“When you’re sat in row Z, and the ball hits your head, that’s Zamora, that’s Zamora.” To the tune of Frank Sinatra’s “That’s Amore”, Fulham fans show their appreciation(?) for striker Bobby Zamora.

“Park, Park, wherever you may be, you eat dogs in your home country! But it could be worse, you could be scouse, eating rats in a council house!” A wonderful chant, heard when Manchester United play Liverpool.

The A-League has had some great ones, although in my local vicinity, the Newcastle Jet’s supporters the Squadron are passionate, but not the most imaginative. One of their best was for goalkeeper Ante Covic – “Anteeee Covic – do do, do do!”.