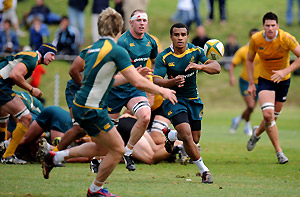 I like the idea of ‘Generation Y’ more than the reality. It gives me something to blame for the Wallabies form. Them, they, those young fellas with the funny haircuts and no respect for their elders – that’s who’s done it. Or isn’t doing it.

They’re all brand this and marketing that. On a side note about marketing – wasn’t it great to see Riki Flutey finally get to wear an All Black jersey?

But let’s not lower the tone of the conversation too far. Stick to the point: Generation Y and how they all look like one of David Bowie’s less successful incarnations.

Thank god, by the way, for blokes like Brad Thorn and Simon Shaw. They’re the last fellas still playing at the top level who are older than me.

Sorry, back to my mark. Now I’m going to show a little flash of Generation Y-esque brilliance myself and change the Y to why (see what I did there?) and ask a few questions about this particular generation.

Why is it that Digby Ioane can still play like he does for the Reds when he wears a Wallaby jumper (or should we start calling it a swimsuit because I sure as hell do not have any jumpers that look like that) but Quade Cooper reverts to the nervous and frustrated 2008 version of himself?

Cooper’s kicking game in this year’s Super rugby season was brilliant, but for the Wallabies he has kicked like a drunk trying to shake of a pair of soiled undies.

Why doesn’t James O’Connor look to pass when he makes those amazing breaks of his?

Why did Will Genia reduce his influence on the field to a passing role when, as others have pointed out, a strong running game from him, much as he provides for the Reds, would have been the correct response to the All Black’s defensive pattern?

The ability of the Reds playmakers to change their game according to the opposition was an absolute highlight of their 2011 season, but in the gold speedos they looked flustered and indecisive.

Now I’m not too sure about the boundaries of this generational classification thingy, so I don’t know where Rocky Elsom sits in all of this, but I’m just going to go ahead and ask the obvious question.

Why is Rocky Elsom the captain of the Wallabies?

Whether you subscribe to the idea that leadership is born or bred, Elsom satisfies neither criteria. He looks uncomfortable in the role and the added responsibility has reduced his usually high standards of play.

I could be snide and suggest that rugby teams get the captains they deserve but when I look at the quality of the Wallaby starting XV I just don’t believe that.

As a captain, Rocky falls into the category of those who have had the responsibility thrust upon them but there is scant reason for this to be the case. There are at least four stronger candidates for the job:

Nathan Sharpe. Captained two Super rugby teams and once led a very successful raid on the Super Chicken outside Brisbane’s RE Hotel during a mammoth session circa 1997 (my memory of the event and its exact date is a bit hazy).

James Horwill. Here’s a bloke who absolutely lapped up the responsibility when he turned from a bit of a loose cannon into the cornerstone of the Reds resurgence. Like Sharpe plays in the natural captains position but unlike Sharpe has his best years ahead of him.

David Pocock. Has potential stamped all over him.

For my money it’s Horwill by a Nullarbor mile with Genia playing the mouthy vice-captain role (I’m picturing Joe Pesci in Goodfellas), but I’d be happy with any of the above if only to relieve Rocky from the post.

Having said that, Scott Higginbotham made a pretty good impression of both Errol Flynn and a starting flanker last weekend so the pressure on Rocky is surely mounting.

For answers to all of these questions I look to Robbie Deans.

Now I know we can’t all say it yet because quite frankly we’ve all invested too much in seeing him succeed, but just pretend it is ten years in the future when we have all accepted that Deans failed as a Wallaby coach and everyone has forgotten that we once supported his appointment. Kind of like how we all look back on the Eddie Jones years now.

Just go on and get yourself to that head space, think about the possible extension to Deans’ contract and ask this question: why?