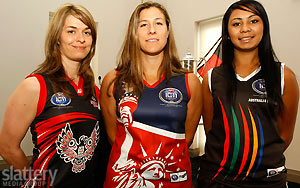 Is there any matter – sporting or otherwise – that Jeff Kennett does not have an opinion on? If ever an editor is light on for copy, he or she need only put a call through to the Hawthorn Football Club President and within seconds be sure Kennett will provide tomorrow’s headline.

The phrase “thought, not spoken” seems to never apply where Kennett is involved.

Last night on Channel Seven’s Sunday Night program, Kennett outlined his belief that one day a woman could play in the AFL. Kennett’s comments were coupled with the stories of several impressive young women who play high level rugby and Australian Rules Football.

The chasm that exists between the amount of exposure given to men’s and women’s sport was highlighted, and viewers were asked to contemplate whether a woman would ever grace the field of an AFL match as a player.

At the risk of stating the obvious, there are significant anatomical and physiological differences between men and women that greatly affect the ability of the respective sexes to perform athletic feats.

Men are stronger, bigger and quicker than women. For this reason, women will never be able to compete against men in elite sports where success is largely dependent on size, strength or speed.

This is not to say that some women who are highly trained or athletically gifted will not be quicker, faster or stronger than some (or even most) men. But at the pointy end of elite sport, the gap between the physical attributes of elite men and women is far too great for women to bridge.

Therefore, the idea that a woman will one day earn a spot on an AFL team on merit is completely ridiculous.

The suggestion that there is a “glass ceiling that needs to be shattered” which prevents women competing against men in elite level sport, as stated by the Sunday Night program, serves only to perpetuate the idea that men’s sport is superior to women’s sport.

Removing the prism of Australia’s football codes and considering the issue of women competing against men in the broader sporting sense, it is a genuine shame that the surest way of gaining coverage for women’s sport is for a sportswoman to announce that she will be entering a competition against men. Women’s sport deserves greater media coverage and greater exposure, but this is not the way to achieve it.

In 2005 Wie announced her desire to win the US Masters and began competing against men in her chosen sport of golf. In each of the tournaments she entered, Wie failed to make the cut. In one event she missed the cut by a massive fourteen shots.

This sort of publicity does nothing to promote women’s sport.

In fact, it serves only to promote the incorrect view that women’s sport is inferior to men’s sport.

Rather than draw attention to the obvious physical superiority of men by attempting to compete against them, elite sportswomen would be better served by highlighting the differences between the men’s and women’s games in promoting women’s sport.

Highlighting the immense talent and skill shown by many sportswomen might be more beneficial in promoting women’s sport than trying to compete directly against men.

Women’s sport deserves better coverage and publicity. However, suggesting that women are capable of competing directly against men does nothing to further the cause of women in sport.