Manly vs Storm Grand Final is a certainty. Or is it? 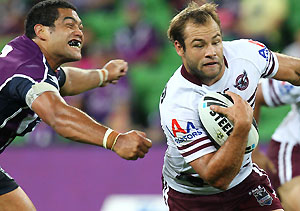 For as long as I’ve been following rugby league I’ve heard people making bold predictions about the two teams who will face off in the Grand Final. They bang on about how any other game bar that one is a waste of time. Invariably these people are proven, in a word, wrong.

Most armchair experts are currently proclaiming that the Grand Final will be fought out between Manly and Melbourne.

It’s simply a forgone conclusion – NRL boss David Gallop is showing a complete lack of leadership by not getting on the phone and cancelling the rest of the year, the finals series, and simply playing those two in a decider.

Clearly, Gallop is only interested in money and it’s a sad indictment on just how far this country has slipped around the s-bend since the halcyon days of the past when the bloke in charge would have been man enough to just pick up the phone and call the whole thing off.

It’s makes me sick to think just how many hard working families will be expected to part with their hard earned to watch games which are clearly going to have no bearing on the teams who will grace us with their presence on Grand Final day.

Of course, the blowhards who now swan around the office talking about the two juggernauts starting with M, were the same geniuses who at the start of the season were telling anyone who’d listen (and even those who were trying not to) about how they were unlikely to ever need to work again after Grand Final day because they had just backed the double of the Raiders meeting the Titans to meet in the big one.

Oh, how those bookies would be made to look like fools and our hero was really going to show them who was boss. I mean, it is the most predictable season ever and you simply couldn’t go past that price. Free money.

Meanwhile, Melbourne were dismissed as being in a “rebuilding phase” while Manly needed to be in one and would never survive with a rookie halfback and ageing pack.

Granted, Melbourne and Manly are likely to go into the finals series as favourites and their winning records so far this year mean the deserve every bit of that favouritism.

But I for one have seen enough from other teams to suggest it will be anything but plain sailing once the finals come around.

Many of the contenders have the star and the supporting cast which could upset the apple cart during the 80 minutes of a finals match.

The Wests Tigers are finishing the season is great form and with Benji Marshall driving the side anything looks possible.

The Broncos have the experience and their drive to send off Darren Lockyer as a winner is lifting them.

The Cowboys toughed it out during Jonathan Thurston’s absence and would have gained a huge amount of confidence. Come finals he should be back to the form he was in prior to his injury the Cowboys could once again be contenders.

I refuse to write off the Dragons simply because I think Wayne Bennett might just be hoping we all stop thinking about them.

Finally, should Souths make the eight well it’s probably likely that society as we will know it will have ended so who is to say what could happen (although one certainity will be one of the most ridiculously hyped up matches in the history of the world).

Bring on the Mad Mondays.