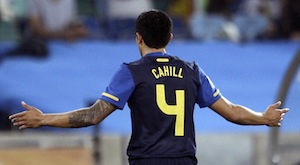 Australia's Tim Cahill reacts after getting a red card during the World Cup group D soccer match between Germany and Australia at the stadium in Durban, South Africa, Sunday, June 13, 2010. (AP Photo/Julie Jacobson)

In the early hours of Wednesday morning, just four days after a 2-1 win over Thailand that was of such poor quality veteran goalkeeper Mark Schwarzer said it “feels like a loss”, we saw what makes the Socceroos a cherished part of the Australian sporting landscape – humility and determination.

In the immediate fallout of the Thailand game Australia’s senior players stepped up and owned their performance and committed to making up for it. In the oppressive heat of Dammam, they did just that.

While Australia now sits pretty at the top of their World Cup qualifying group on six points, the decision by coach Holger Osieck to leave Tim Cahill out of the starting XI against the Saudis stands out as particularly curious.

Before we get to what this move could potentially mean, we must understand the reasons for it.

Essentially, Cahill is most effective playing off the striker, but instead of serving as a link between midfield and attack, he can be prone to playing too close to Australia’s other striker.

However, the second striker in Osieck’s preferred 4-4-1-1 formation is also the position where Holman is most effective. A player who can drift between the lines, the AZ Alkmaar midfielder brings that much vaunted ability to link midfield and attack that Cahill lacks.

It’s a point Osieck agrees with as he revealed when explaining the decision to drop Cahill for yesterday morning’s match.

“It was tactical thinking,” the 63-year-old said. “I think with Holman, and he proved me right, that we had a lot of mobility up front, he worked into the channels and that was what I expected.”

Just as the English national team has grappled with trying to fit Steven Gerrard and Frank Lampard into the same midfield for years, Cahill and Holman present our own similar little conundrum.

So then, what to do with Cahill?

While Osieck found a solution to fit them both in the same team during the Asian Cup by playing Holman to the right of midfield where he would play extremely narrow, when Kewell is absent the Socceroos lack a striker who makes the kind of runs that help the team become more direct at goal when they win the ball back.

The few times in the last two games where an Australian player has turned to face the opposition goal with the ball after he has won possession in or around the middle of the pitch, Kewell’s replacement Kennedy was making the wrong kind of runs or was caught offside.

Furthermore during Australia’s build-up play against Thailand, the team was often tempted to take the easy out when there was no horizontal pass to make. Lumping it long from defence or trying to get an early ball into the box from out wide is Verbeek-era stuff and against Thailand it simply wasn’t effective.

What better example do you need of the fallacy of playing direct than Australia’s inability to break down a team ranked 120th in the world with this approach?

While one alternative would be to drop a holding midfielder and play Cahill staggered ahead of either Valeri or Jedinak, it’s both a waste of the Evertonian’s talents and jeopardises Osieck’s preferred system.

So, while Cahill’s worth and ability is not in question, by leaving him on the bench against Saudi Arabia, has Osieck hinted at a potential Socceroos XI that doesn’t include the 31-year-old?