What sort of French magic would it take to win RWC? 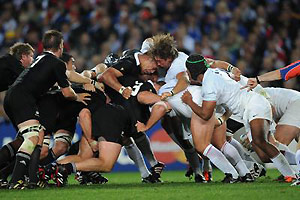 You know what, bugger it, I’m going for France. I’m taking my bat and my ball and I’m bailing out snail-side for the world cup final. I know they won’t win; not a ewe’s chance at a Dunedin B&S, but I’ll be buggered if I’ll just float along with the rest of the crowd and support New Zealand.

I don’t want to be like everyone else at the World Cup. That’s just not my bag, not how I roll.

Standing with my little goat chest all puffed out on top of Mount Solo with the winds of rage gently swaying my giant goat bollocks back and forward like a hairy pendulum of obstinacy.

But seriously, I don’t want to be like everyone else at this World Cup.

I don’t want to be like the Welsh who despite not beating a Tri Nations team for what, three years, convinced themselves that after a little razzle-dazzle their forced removal from the world cup somehow devalued it. More front than Brighton.

And I’m not sure I want to be like the Wallabies either.

There’s nothing wrong with getting blown out of town by the All Blacks in a world cup semi final. I’m not whingeing about that but I’m just not sure I like this wallaby team. I mean I like the Reds players; they’ve got the runs on the board – they played some great rugby this year.

And most of the Waratahs were pretty good too – in patches. The Force guys did OK given what they’ve got and so did the Rebels. Can’t say the same for the Brumbies but …

The Wallabies were just not greater than the sum of their parts.

Without discrimination, without personal vendetta, without appeal to hindsight or lack of sobriety I just don’t reckon Robbie Deans has done a great job as Wallaby coach.

That is just my bare goat-arsed opinion which has been, unlike his Wallabies, consistent and although I’m not pushing the line that he has become a bad coach, I think his performance has been below what he would have expected.

I base this on three key issues; our scrum problems have not been resolved, we don’t seem to play to an identifiable plan and, as mentioned, we have developed a capacity for inconsistency that is almost, well, French.

We haven’t stolen this albatross from their necks as the French are still as flaky as they’ve ever been but then, to be fair, their current team is carrying a genuinely awful coach.

They have a better centre combination than Australia and, in Maxime Medard and Vincent Clerc, they have backs every bit as potent as Australia’s much hyped (over hyped?) young guns.

The big difference is in the forwards where, should they be struck by a fit of composure, the French can stand shoulder to shoulder with any pack in the world, including New Zealand’s.

You can go on and on about who deserves what and how much an All Black victory would mean to the people of Christchurch.

You can point to the immense games of Brad Thorn and Richie McCaw in their defeat of the Wallabies and how, after 24 years, its the time, its the place, it’s the vibe, it’s the constitution, it’s Mabo …

You go do that. I’m going to stand here with the wind on my balls, la Marsaillaise on my lips and I’m going to hope like hell for some magic on the weekend.