On expressing a love of sport

Those last two words in the title are important on a website like this; an Australian website, where men are men and women are something similar. At the collision of blokey-ness and the desire for hearty exploration of our feelings and their most careful articulation.

This piece is about love – imperishable and relentless – but it is set among the flock under the sheepskin of sport and that is as much of a concession as I care to give.

In part, this website is a conduit to love, or at least love’s herald, passion, and its greedy needs. Not passion in the singular but the communal passion of tribalism that endures in the sport fan’s experience.

Tribalism is not of our prehistory but a state, returned to regularly as a dog does his howling, a preacher his fearing.

In the collective, each expresses themselves according to their needs, and on The Roar there are a Babylon of tongues, each telling the other the same story.

Of them all I listen closest to Sean Fagan who seems to have been burdened with the desire to inspect every pebble along the diverging paths of the rugby codes. Though he does not contradict my belief that the first tool of all historians is an agenda, he overturns myths, prejudices and false idols with equal measures of care and disinterest.

He is generally respectful of tradition and dismissive of convention, as we all should be.

Spiro Zavos’s work appears to me as a banquet, that one must first briefly take in whole before plating a few perfectly turned thoughts for later re-consumption. Like Sean, Spiro is dexterous at wielding the right fact at the right time.

However, his gift is in accumulating observations and tickling out the flow that links them.

There is a stride of the crusader in Spiro’s writing and though this bucks many, my counter-revolutionary marrow included, I find my centre of gravity more often on his side of the fence than the other. He has persuaded me that while rugby can be played in many ways, it should only be played without fear of losing and with every hope and expectation of playing it excellently.

Anything else is to fail Henry James’ test – to live all you can: it’s a mistake not to.

Spiro rallies against the sort of rugby that is lived on its knees and, forgiving him the occasional prejudice, is the least we can do by way of thanks.

David Lord is a man who speaks from the hip but what a hip. If you are to swing the hammer then do so like David rather than the soft, broad and tentative swipes of his detractors.

Bruce Sheekey is by turns liberal, grumpy, dismissive of the modern yet enlightened, strident in his thoughts but careful, too careful of the value of loyalty. In short he is the best of us; the Trapper John of the Roar.

I miss the contributions of Vinay Verma whose love of everything could never be mistaken for mere tolerance. It was at the point of Vinay that the Roar swung away from the love of sport and towards the love of writing for he thrived in his (I assume) second language and handled it with the alien accuracy better known in other polyglots like Nabokov or Conrad.

Cricket writers are of a pretentious school that wail at the wall of introspection and too often hang their flaccid thrusts on flimsy similes carefully placed every few lines to remind the reader of the cellophane parallels between cricket and life.

That said Vinay always had the most difficulty releasing my bile when it came to cricket coverage; the Coleridge of the Romantics.

It is however with the undercurrent that the will of The Roar is carried and no writer ignores the comments section fully, try though I have to refrain from the fray. In the thoughts and arguments of The Roar’s readers are the germs of many a fine article but far more than that there is to be found a perfect gauge for sense and insanity.

When all around you are in agreement, be assured madness has set in. This thought was recently with me while trawling through the wake of an article praising the high, New York moral stand of those who love all sports equally and condemning the philistines who engage in code wars.

While I am aware of and thankful for the efforts of this site’s moderators to raise the level of discourse on The Roar, I view outbreaks of code wars as did Thomas Jefferson the occasional insurrection – the perfect opportunity to restore order after the release of natural pressures.

The natural pressures that cause code warring have driven Australian rugby to shake off its ‘kick and clap’ tag much as soccer has had to shake of the idea of it being only for ‘sheilas, wogs and poofters’.

The battle between the rival sporting codes in Australia has been an essential part of the nation’s sporting excellence. It is not enough for rugby to be rugby in Australia but it must push itself to be better, more entertaining, more rewarding.

These drivers are largely unique to Australia and to condemn the practice of code warring itself is to blame hunger for gluttony.

The competition between the codes, both sober and irrational, has been a spur to their growth and to denounce those whose actions and words play their part in that arc is to engender the death of the human intuitive faculty.

As there are enough people engaged in spoiling code war mutinies upon this site I hope the editors won’t begrudge me too much in taking a rebel stand for the honest and passionate release of irrationality that we call code warring.

Long may it plague the moderators.

There were some tasty snippets in the Rebels vs Reds clash last Friday but a pair of moments – in terms of sheer excitement – stood above the rest. 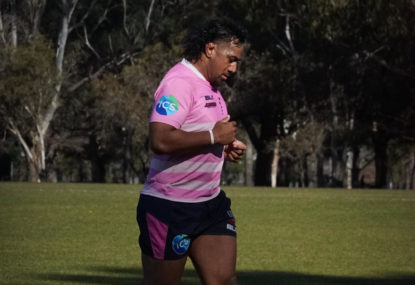 The simplest fix for Australian rugby will just be having the Wallabies win more games.

It’s time for Australia to go it alone in rugby. New Zealand don’t see us as valuable competition, they may even see us as a burden.

NZ Rugby is expected to recommend a reduction in Australian teams when it unveils its preferred future franchise competition model on Thursday.