The new and improved AFL fixture and draft?

Tanking, 100+ wins, The ‘big divide’, rebuilding… We’ve heard these words plus many more like them this season. I’ve always believed anything over 80 points is a very big win. I’ve counted 22 big losses this season over 80 points.

Seven 100 point beltings from Top 10 sides on the ladder given to Gold Coast, GWS and Melbourne. Also a lot of 90 point losses to those three sides as well as the Bulldogs, mostly all courtesy of your Hawthorns, West Coasts, Collingwoods, Sydneys and Adelaides.

It has become common knowledge that if a player is not 100%, there is no point risking him against the bottom sides. And for the bottom sides, players are sent into operation early than what they would’ve if they were in finals contention as a way of throwing in the towel.

And why wouldn’t you, with high draft picks comes great power! The difference between picks one through four to picks 12-20 could be your next 80 goal a season, 250+ gamer full forward, or your future Brownlow medal winning captain. Why risk losing a player of that calibre if you’re not even going to get close to win the big one?

Before last round, we had 12 teams mathematically a chance to make finals. Despite it now being impossible for Richmond, these next two rounds will be enjoyable to see who clinches seventh and eighth spot. We should be encouraging this!

I think I have a solution that will eradicate tanking, improve the equality of the AFL and hopefully increase crowds, viewers and general interest in the game. Using the 2011 ladder as the basis, I split the 17 teams into three divisions – top six of 2011, middle six and bottom five. I then included GWS to make it a bottom six and three equal divisions of six teams.

Here is the pic – pic.twitter.com/z4GlYnDB

As you can see, most teams played equal amount across the board. Playing seven or eight games was the standard within each division. However, we can see Collingwood and Sydney fixtured to play nine games against top six (five for Pies) teams of 2011, while Giants and Power only played each top six side once. Fremantle played bottom six sides of 2011 an amazing nine times, while Collingwood only six.

I am all for equality, and to finally put all these stats altogether, this is how I want to see the AFL fixture in future seasons and the future AFL drafts.

Firstly, split the 18 teams into the aforementioned three divisions. But we still keep the same ladder format, divisions are simply for fixtures and draft picks.

Secondly, for the fixture, a side plays the five other teams in its division twice – once at home, once away. It then plays the remaining 12 sides in the other divisions once. This hopefully will mean more important matches where equal calibre sides are playing each other for something, but still allowing each side to play each other at least once. So 10 games within their division, 12 outside. Still 22 games.

Finally for the draft. This is where I’m a little unsure so I have two scenarios. Either keep the same three divisions and it’s a lottery system between those divisions. Bottom six randomly get one of the first six picks, middle six get the next randomly picked six draft picks, top six randomly get picks 13-18. This will mean that there is no benefit from last, as your first draft pick may be number six. Perhaps do the lottery system once more and then 18th place gets number 37, 17th number 38 and so on. Sides which finish bottom three two seasons or more in a row get priority picks starting at number 19.

My second idea is same process as above except three teams at a time, so it’s a lottery system between bottom three for first three picks and same process as before. However, I still think teams will manipulate results to finish in the bottom three, so am more inclined towards three divisions, six teams per division.

AFL is not the EPL. We don’t want huge differences from middle of the ladder to 18th. Personally I have loved the upsets of 2012 and hopefully this continues. It is impossible to relegate Western Bulldogs to the VFL in exchange for Port Melbourne (as humorous that would be), or Port Adelaide for Norwood.

I’m not sure we can get away with actual conferences like the NBA because it wouldn’t mean anything to top a conference. Moving teams to different states won’t solve the problem.

If the AFL wants money then give people close games. A Suns or GWS home game versing Melbourne, Dogs, Power, Lions or each other will surely bring in more people than a home game against Hawthorn. People want to see their home side be competitive, no one will go if they think their side will be beaten comprehensively.

I think Adelaide versus Melbourne at the MCG will further prove my point.

At the moment, keeping and gaining more fans of AFL in Gold Cast and GWS is the key. Can’t be scaring people away with shockingly fixtured games at home against strong clubs. You want GC Suns or GWS fans going to those games, not away supporters who live or travelled to those places.

There is my idea, I truly think this will at the very least remove tanking from our game. But have no doubt if properly implemented, the AFL and we supporters of all teams will reap the benefits for years to come.

What do you think Roarers? Any improvements or got queries, leave them below.

Number one draft pick Matt Rowell’s arrival on the Gold Coast could be the spark needed to turn around the struggling club.

After a failed bid to have the North Melbourne Kangaroos relocated from Arden Street in Melbourne to the Gold Coast in Queensland, the AFL granted a provisional licence to a bid team known as GC17 in 2009.

At the beginning of October, St Kilda football boss Simon Lethlean confirmed the club was thinking about making a play for Gold Coast’s Ben King in the 2020 trade period.

The Tasmanian AFL bid now has real momentum behind it with 48,140 supporters now signed up on the ‘United We Stand’ website. 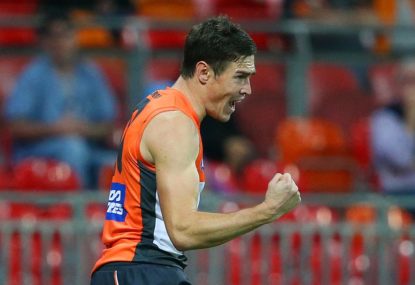