Brittney Griner puts the WNBA in the spotlight

When the Phoenix Mercury selected Brittney Griner with their number 1 WNBA draft pick earlier this week there was not one person who was in the slightest way surprised.

The 22-year-old stands over two metres tall and broke a number of college basketball records before entering the draft.

And now, with a huge weight of expectation on her broad shoulders, she’s ready to take her immense talents to the next level.

“I feel like a kid at a Disney World for the first time.” She stated after she was selected by the Mercury, adding that it was a dream come true.

During her college career, at Baylor University in Texas, Griner broke a number of records as she became arguably the greatest female player in college basketball history.

She blocked 223 shots, the most ever in a season, while she also set Baylor’s first ever triple double when she recorded 34 points, 13 rebounds and a record 11 blocked shots in one game.

She became only the seventh woman ever to perform a slam dunk in a college game while she was the first ever to record two in one game when she famously dunked twice against Texas State in 2010.

And now, after winning two Big 12 Conference Championships and one National Championship, she’s heading to the WNBA.

And they have already planned for her arrival. They have brought in the three second defensive rule, similar to the NBA, which seems like more than just a coincidence with defensive juggernaut Griner entering the competition while they have also extended the three point line.

However the WNBA will be hoping they are not the only changes to be seen next season.

With the league still struggling to really break into the mainstream of American sport, Griner’s entry is expected to boost both crowds and television viewership.

Unlike almost all other female players, just seeing Brittney Griner’s name is enough reason for people to buy tickets. The WNBA will be relying on this as last season’s average crowd attendance of 7,457 was the lowest since the league’s inception since 1997.

Brittney Griner is going to change not only basketball but female sport in general. She is young, modern and marketable. She rides skateboards, enjoys kayaking and states that she eats bacon before matches for good luck.

She’s confident but humble, funny and flamboyant, as her smiling face and flashy white suit at the draft proved.

She’s already the face of the WNBA and will be vital in ensuring the success of the league’s new look, with its new logo and broadcast deal with ESPN ushering in a new era for the game.

It hasn’t been all smooth sailing for Griner though. During her college career she faced harsh criticism and was suspended after punching an opposing player during a game.

However the main controversy surrounding Griner relates to her sexuality. She has constantly faced accusations about her gender, yet she has embraced who she is and that is exactly what makes her popular.

“I don’t have a soft voice. People say I have a deep voice, and yeah, I do. I’m just so comfortable with it and if I can just give that back to the younger generation and younger girls, and younger guys that are different as well. Anybody that’s different, be who you are. You never want to change that.”

Brittney Griner has become much more than just a slam dunking and shot blocking highlight reel. Her game has become well rounded and the stage is set for her to dominate the WNBA.

But on top of that she has become a role model as well as a marketing tool. But for someone with so much ahead of her in every facet of life, she intends to just enjoy the moment.

“I’m just a kid.” She laughed, reminding everyone that she is only 22. “Having fun and just soaking it in right now.”

All 60 games of the fast-tracked, North Queensland-based WNBL season will be shown live as part of the league’s broadcast deal reached on Friday. 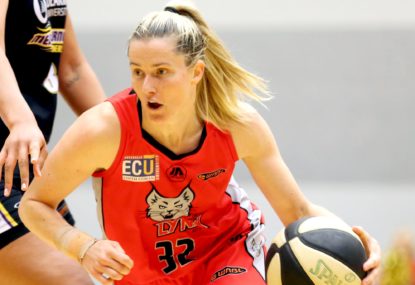 Over the past week, there has been talk that the Dallas Mavericks will be going all in for two-time MVP, Giannis Antetokounmpo once he hits free agency next year, in the hope to form the league’s new ‘Big 3’. Whilst our eyes light up when we hear the possibility of Luka Dončić, Kristaps Porziņģis and […]