Believe it: Contested possessions are important

‘Win the contested ball and you’ll win the game’ – it’s fast becoming a Kingism (calling it contested ball certainly doesn’t help in this regard), but is there anything to it?

Roar expert Cam Rose wrote a great piece questioning the value of this statistic as a predictor of victory a few weeks back; coincidentally a couple of days before I started working on this piece.

What is a contested possession? I put this question to Champion Data around two weeks ago, and didn’t get a response. Presumably my email was considered junk, because it’s not like Champion Data to treat the punters as mugs, is it?

Editor’s note – Champion Data have since replied to Ryan, and it’s in the comments section below. Ryan has also apologised for appearing a tad harsh in the above.

Anyway, based on various definitions I’ve come across, a contested possession (CP) is awarded to a player who ‘wins’ the ball when there are two or more players from opposing sides who have the opportunity to win the ball.

A possession and a disposal are two different statistical classes. They are used interchangeably quite often – I must admit until I’d looked into it I had just figured they were both measuring the same action but in different ways. A possession is a ‘get’, while a disposal is what a player ‘does’ with the ball once they’ve got it.

Ever noticed on the AFL’s stat widgets that ‘possessions’ and ‘disposals’ normally differ by a a handful of numbers?

What I hope to do in this piece is explore the importance of the contested possession as a predictive stat for victory.

Does contested ball matter?
To answer that, lets start with a chart that shows the winning percentage of teams based on ranges of contested possession differentials (a differential being the Cps ‘for’ or ‘won’ take Cps ‘against’ or ‘lost’).

Based on the figures, it looks like the positive effect broadly tops out at a CP of +31 – the winning percentage hovers around the 90 per cent mark in brackets above this level (and the same can be seen on the left tail of the curve).

This is fairly intuitive – if a CP is winning a situation where the other team has a chance to win it, and you’re able to win more of these than the other team, then it follows that you’re putting yourself in the best position to win.

“But Ryan,” I hear you utter with some smugness, “correlation does not imply causation”. Yeah, agreed. That’s not what this article is about. Lets now take the analysis a bit further.

If a positive CP stat is important, won’t it mean that a side is more likely to win games even when they end up possessing the ball less often than the other team? Well, actually, this is true: in instances where a team has a negative total possession (TP) differential, they’re only expected to win 25.3 per cent of the time – but win CPs and this expected win percentage lifts to 42.4 per cent. This is a boost of around one third.

The same is true in reverse: if a team wins TP, it can expect to win around 74 per cent of its games. But, in instances where it loses CP but wins TP, the winning percentage drops to 57 per cent – a fall of around 25 per cent.

It’s worth pointing out that the scenario of a team winning contested possessions but losing the overall possession count is reasonably rare. In the 1750-ish games I’ve looked at here, it’s only happened 166 times – less than 10 per cent of games in my sample. In the economics game we call this ‘autocorrelation’, which broadly means something is true mostly because some precondition makes it so.

Here’s a handy graphic that summarises the figures (green means the stage of the equation is positive for winning percentage, red means negative, blue means neutral and grey means not applicable). 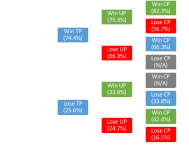 This suggests causality, and fairly strong causality. But you’ll notice that there are greens on the ‘up’ side of things, too. This is uncontested possessions, and its something I’ll close on in a couple of paragraphs.

Another way we can test for a causal relationship is to run a test known as a logistic regression or ‘logit’ regression. These are used quite a lot in the medical game as a way of determining survival rates for various conditions.

It works on the principle that you can have two outcomes that can be partially explained by one or more variables: in medicine, its life or death; in footy, it can be wins and losses.

If you hate math, look away now…

You don’t need the details, but the logistic regression of CPs found that for each positive CP differential, a side’s chance of victory increases by roughly 1.5 per cent; although this is on the basis that the ‘starting point’ is a victory change of around 48 per cent.

To put it another, slightly technical way, a team which has a CP of +12 should win around 68 per cent of the time, according to this formula:

So that’s a bit mathy. But if you want to work out winning percentages based on CP differentials, simply change that 12 to another figure.

To sum up, winning CPs is certainly an important component of success. A couple of different methods of analysis have shown that using differential analysis showed that a positive CP has an influence on winning percentage, regardless of whether a team wins or loses other high level possession categories; while a basic regression test determined a significant causal relationship.

Are uncontested possessions becoming more important?
I’d like to end with a bit of a thought provoker: having a positive UP differential is, increasingly, a marker of success. Check out the below chart, which shows the 200 game moving average winning percentage of teams with a positive CP and positive UP.

Are sides finally cottoning on to the notion that ball use is more important than toughness, and the ability to win the ball in contested situations? Perhaps.

I’d call this ‘The Hawthorn Effect’: after Hawthorn won the 2008 flag, largely on the back of elite skills and smart offensive and defensive structures, the ability to possess the ball more often in situations that allow for the execution of skills appears to be having a strong impact on winning percentage.

That’s not to say contested possessions aren’t important – but we may be moving further into a new era in the AFL where skills and execution are placed at a premium over the ability to bullock through packs and find a way out with the ball.

Sorry for not getting back to you but the email went to the wrong people in here. If I saw it at the time we would have replied. Contested possessions are made up of:
* Hard Ball Get (win disputed ball while physically beating an opponent at ground level)
* Loose Ball Get (win other disputed ball at ground level – ie. right place, right time)
* Contested Knock-on (knocking the ball out of a pack to a teammate’s advantage – Hawthorn do this a lot)
* Gather from Hitout to Advantage (similar to looseball get, but the ball was fed from the ruckman’s tap)
* Free Kicks (excluding those paid off the ball or downfield)
* Contested Marks (all marks where an opponent had a chance to mark or spoil – not including marks on lead)

A big reason why contested possessions are used so heavily in the media (and I do agree that it is overused as a stat) are because they are also used heavily internally at clubs. Regardless of the volume of the win in the stat it is a simple message that can be relayed to players and one that be easily benchmarked. Players know what it means to beat their opponent and get first hands on the ball more often. There’s no point telling a playing group to go out and kick more goals than the opposition, or to have more shots at goal, or to win more inside 50s, etc.