The Waratahs are better than the Wallabies

Words can not express how overwhelmingly pleasing it was for me to see that the Waratahs won their first Super Rugby title.

Many will now theorise that this bodes well for some major silverware for the Wallabies in 2014. Maybe not.

Based on the side McKenzie is likely to select, it is my reluctant opinion that the Wallabies will actually be a weaker side than the Waratahs. This is a problem because the All Blacks will certainly be a lot stronger than the Crusaders side that almost caused an upset against the ‘Tahs.

I also fear that the Springboks will be about twice the side that the Sharks were.

Therefore, I personally can’t see the Wallabies winning The Rugby Championship in 2014. There is some hope that we might win the Bledisloe Cup but only if Ewen McKenzie forgets 2013 and chooses on 2014 form.

I am not suggesting that the Wallabies should simply be fifteen Waratahs. Not at all. But the Wallabies side I believe Mckenzie will select will not be as strong as the fifteen players that ran out against the Crusaders last week.

My reasoning begins with the fact that two of the best Waratahs forwards are unavailable for Wallaby selection. Kane Douglas has been a consistent stand out in the pack but he is off to Leinster, and his swashbuckling partner, Jacques Poitgeter, is of course a South African.

Unfortunately for McKenzie there is not a lock combination available that is better around the park than Douglas and Poitgeter.

I imagine that Rob Simmons will be one of the locks selected for the Wallabies, which gives the Wallabies a considerable weakness around the park when compared to either of the Waratahs locks. Simmons give the Wallabies a line-out caller, but at what price?

I imagine the other lock will be Sam Carter who does get through a lot of work but he just doesn’t have the physicality of Douglas or Poitgeter.

If we consider that for a variety of injury and selection reasons the front row for the Wallabies may now be weaker than the ‘Tahs equivalent, at the very best on par, I can not see the Wallaby tight five being competitive enough against the Springboks or the All Blacks.

I also may mention that Benn Robinson being lower on the pecking order than Pek Cowan is absolute madness. Yesterday I spat out my lunch when I read that Laurie Weeks was preferred when Scott Sio succumbed to injury.

Madness I tell ya!

What also concerns me is the dis-proportionate status of Scott Fardy in the backrow. His reputation is far beyond what his actual deeds on the field deserve. How can a player that had no impact in the French series be the seemingly automatic selection he is?

In that series, according to ESPN, he carried the ball all of 21 metres. That’s seven run metres a game. He also made a total of 21 tackles, again seven per game, and yet he barely did his job at the breakdown.

I also watched him intently in recent big games and he did little to impact on those games. Can we afford to have a back-rower that does not do his fair share just because he looks like a cave-man and occasionally gets in a good position over the ball? I don’t think so.

Yes we will have Wycliff Palu and Mike Hooper but the pack that the Wallabies are about to put out simply will not have enough decent ball carriers. This could be fixed by some clever selections, namely Will Skelton at lock in place of Rob Simmons, and Ben McCalman or even Scott Higginbotham at six in place of Fardy.

We need to try and take it to these heavyweights of world rugby as the Waratahs did in the Super Rugby. I can’t see any of that happening. Not until it is too late anyway.

Then there’s the likely Wallaby backline. This will most likely be the one used against France, minus the honey-badger of course. My major issue is with what I expect will be the scrum-half and the centres.

I would prefer that Nick Phipps was selected to play at no 9. I can kind of live with Nic White being selected as long as he is put under instruction to use his fly-half much more than he does.

Speaking of which, Foley will be selected at no 10, and that is a good thing. He is the calm, humble and unselfish no 10 we’ve been looking for, ala Dan Carter, to lead our back-line attack.

As for the centres, I imagine Matt Toomua and and Tevita Kuridrani will be selected at 12 and 13. Many expect that and probably are happy with it. For me that centre pairing makes no sense.

Let’s start with the inside centre. Toomua is a 10 and has played very well there for the Brumbies. But for all his strengths he simply offers less at 12 in all areas but defence.

Beale looked the better player when he came on against France and he has been playing at 12 with great success for the Waratahs. With clever defensive structures he has not been such a defensive liability either.

The Waratahs had the best defensive record in the competition, after-all.

To be blunt, Adam Ashley-Cooper is a better no 13 in all facets of play than Kuridrani and by a long way. Even Kuridrani’s reputable go forward is no-where near as good as Ashley-Cooper’s.

Both these players played a similar amount of minutes in this year’s Super Rugby. According to Fox Sports, Kuridrani made 666 run metres with 29 tackle-busts and seven line-breaks in the regular season. Not bad I hear you say.

Not when compared to Ashley-Cooper who made 1165 run metres with 52 tackle-busts and 14 line-breaks.

But I am sure McKenzie will once again select Ashley-Cooper on the wing, where his talents for hole running, stellar defence and gaining turn-overs becomes less of a factor.

So overall the Wallabies are going to have a weaker pack than the Waratahs, and a weaker back-line, yet they will be playing much stronger opposition when the Springboks and the All Blacks combine their super rugby franchise forces.

Over to you Mr McKenzie. Some of the issues with injury and players unavailable will force your hand. But if you take Cheika’s lead you could lead the Wallabies to at-least the Bledisloe Cup in 2014. You could do this by picking on 2014 form and adopting the same ball in hand style that the Waratahs used to unsettle their rivals. However, I fear you are about to blow it! 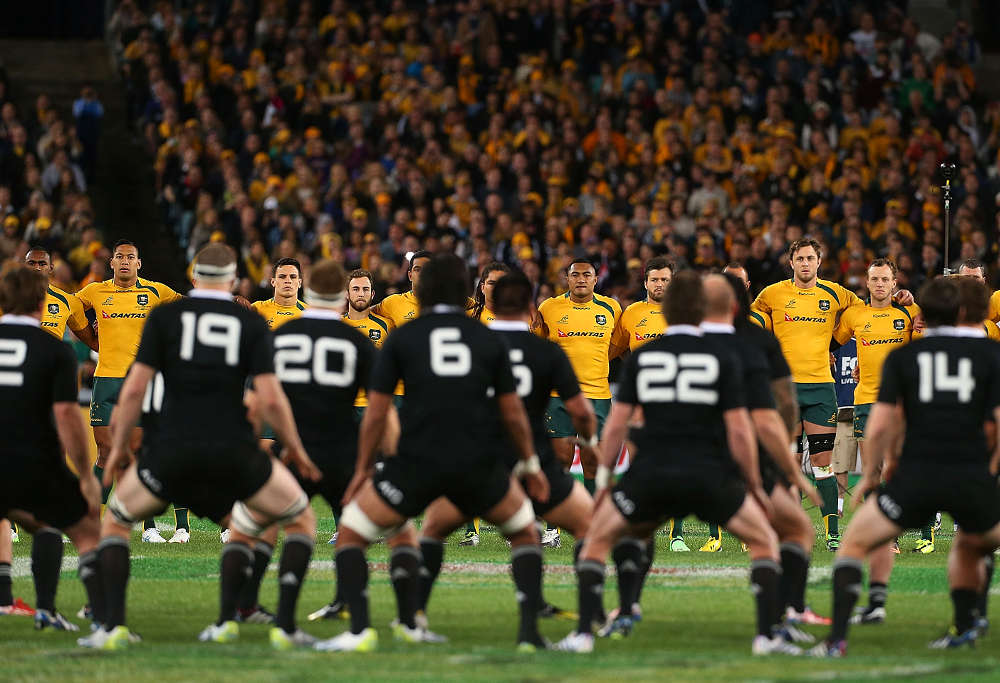 The Bledisloe is almost here!
Tickets are on sale to what will be a blockbuster at ANZ Stadium (get yours here). After a cracking Super Rugby final, this promises to be epic.

There’s also plenty happening in the lead-up, with the Bledisloe Cup Festival a chance for true rugby supporters to get together.

Want to introduce yourself to a few of the players? The Bledisloe Bay is your best bet on Thursday 14th August from 5pm. Check it out!