Curly Doodson and the Swimmers: Untold football stories from the Great War

The Hospital ship HMTS Gascon was steaming through the Eastern Mediterranean as fast as it could go. On board were wounded and dying Commonwealth soldiers recently plucked off the beaches of Anzac Cove.

The casualties from the Gallipoli landing had overwhelmed the authorities and the Gascon was racing towards Alexandria on a mercy mission.

One of those soldiers on board, suffering terrible pain from gunshot wounds to the abdomen, was a 19-year-old wharf labourer from Sydney. By the time the ship docked at Alexandria, he was already dead.

The young man’s name was Frederick Doodson, whose mates at the Pyrmont Football club had given the nickname “Curly”. He is among the first of Australia’s association footballers to have been killed in the First World War.

A few weeks later in a match against Annandale, the Pyrmont team affixed black armbands to their blue jerseys in honour of their fallen teammate.

Pyrmont was one of the great clubs of the pre-WW1 era, playing under the colourful epithet of the Swimmers. Whether this was a reference to the waterside location of the suburb or the blue swimmer crabs common in the harbour, I am not certain, but the Sydney football scene, with its high proportion of expat British players during the early years of the 20th century was a highly competitive one. 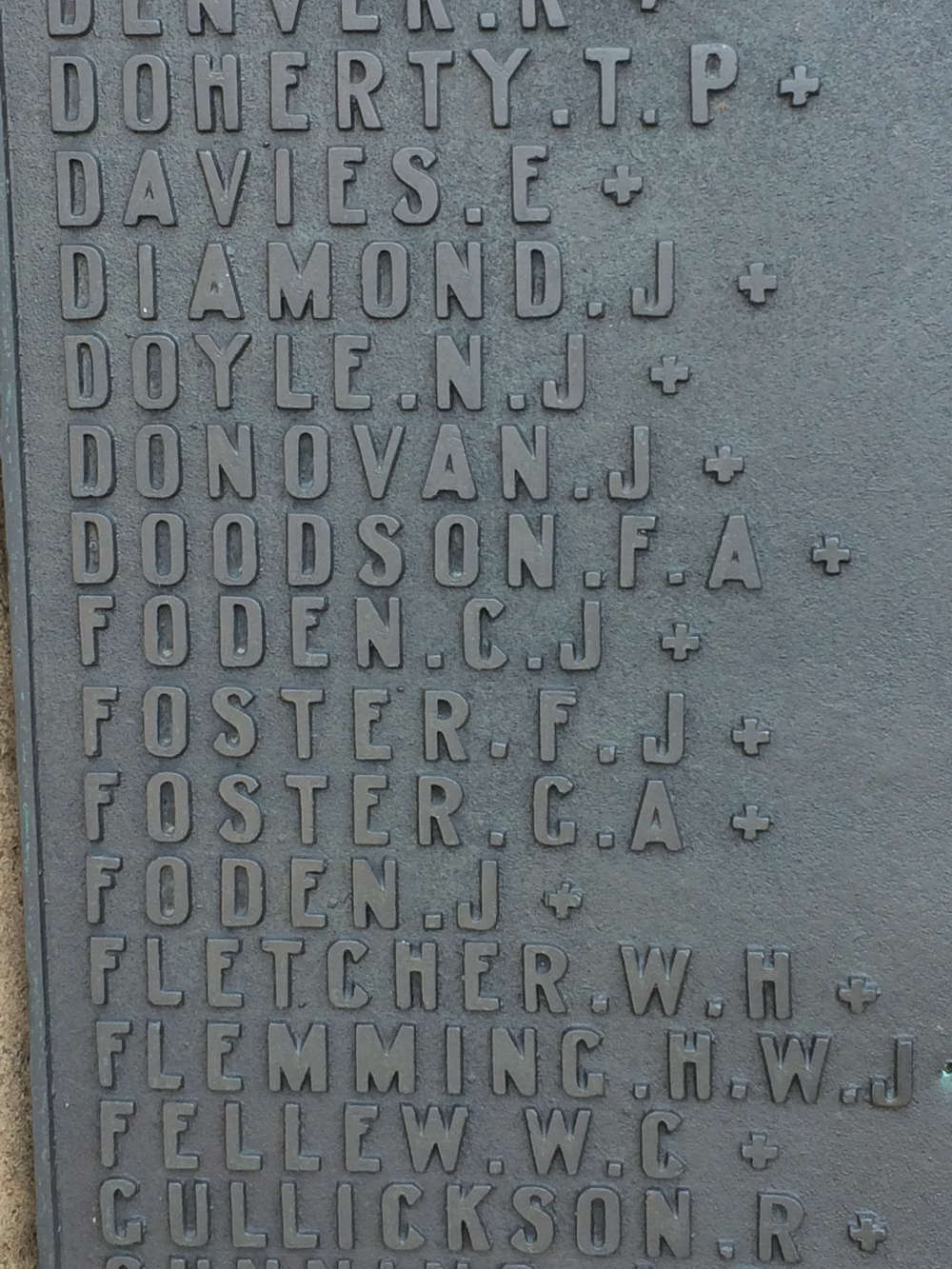 In the First League of 1915, the teams were: Annandale, Balmain (black and gold hoops), Drummoyne, Glebe (dark maroon), Granville (black and white stripes, known as the Magpies), Northern Suburbs, Pyrmont (blue) and Sydney (blue). Besides the Pyrmont Swimmers, the other big clubs of the day were Balmain and Granville.

Anyone familiar with Sydney may notice that five of these clubs were within a few kilometres of each other in an area surrounding the Balmain peninsula. With their heavy industry and busy dockyards being magnets for working class migrants from the British Isles, these areas along with the industrial cities of Wollongong and Newcastle became the hotbeds of football in Australia.

Granville, near Parramatta in the Western Suburbs, was another industrial area, being home to the massive Clyde Engineering works.

Not that all the players were born overseas.

In September of 1915, when Jack Carey enlisted it was noted that Carey was “generally admitted to have been the best Australian-born exponent the game has produced.”

Curly Doodson himself was born and bred in Sydney. Being a wharfie, a gifted swimmer and with a passion for boxing, you get the impression that Curly was a bit of a hard nut. In fact while training in Egypt he liked nothing better than getting into the ring with anyone willing to take him on.

Sydney’s early 20th century footballers competed in the league for the Rawson Cup and in a knockout competition known as the Gardiner Cup. It is interesting to note, considering current day debates, that there were no play-offs and that Australian football followed the British custom of separate League and Cup competitions.

The 1915 season kicked off shortly after Australian troops had their first taste of action at Gallipoli. As the casualties mounted, players enlisted in ever increasing numbers. Granville, winners of the League and Cup double in 1914, had six of their first X1 in uniform by the end of the season.

Star centre forward from Wollongong, JW ‘Judy’ Masters and half Harry Wheat from Sheffield, both served at Gallipoli before being wounded in France. John Willie Cottam, who with his family had migrated from the UK just a few years before, was killed by a bullet through the forehead in early 1917. Richard Fairweather was captured by the Germans and spent two years in a POW camp.

The league was a tight contest but eventually it was Granville who took the honours. They lost only once all season, 2-1 against rivals Pyrmont. They accounted for Pyrmont 6-3 in the cup before going out to West Wallsend 2-1 in the semi-final. In the other semi, Balmain knocked out the red-shirted Corrimal team to set up a classic Sydney-Newcastle decider.

Spectators forked out the princely sum of sixpence and one shilling for admittance to the 1915 Gardiner Cup final.

It was played at Sydney University Oval, the home of football in the state, which hosted all the big league, cup and interstate matches.

On a fine day, Balmain and West Wallsend ran out in front of the biggest crowd of the season, featuring many repatriated soldiers, detachments of British troops and a large contingent of rowdy West Wallsend fans who had come down by train decked out in the sky-blue colours of their team.

With some well-oiled Balmain support it’s not hard to imagine there being a decent atmosphere at that game.

A mistake by Williams was seized upon by Winton to put Balmain one up at the interval. A good short passing move capped off by an unstoppable shot from Charlton put Balmain up by two in the second half.

Although under strong pressure towards the end and with their keeper Fred Storey required to pull off some great saves, it was Balmain’s captain Alf Law who was able to the hold the cup aloft. It was the club’s seventh success and they had won every final they contested.

The conclusion of the 1915 season brought on mass enlistments from football’s ranks including the whole of the lower division Lancashire Society Football Club. Annandale Football Club had 13 players either at the front or in camp with AC Clarke having already paid the ultimate price at Gallipoli.

By 1916, enlistments had severely affected the competition. Glebe and Sydney dropped out. Balmain was represented by a suburban team and Granville only entered at the last minute. Drummoyne, whose players were mostly drawn from employees of the Cockatoo Island Naval dockyard, was all but decimated. To compound matters, Sydney University Oval was no longer available.

However there was time for one last great hurrah. Hearing that there was some overseas soldiers in town, club officials pulled a few strings so that when Pyrmont and Balmain ran out on to the Sydney Cricket Ground on the sixth May 1916, a contingent of 200 French-speaking Tahitian troops were on hand to cheer them on. Nearly one hundred years ago, football was proudly displaying its multicultural credentials.

In other ways there were similarities to the current state of football. The Sportsman reported in 1915 that “Although the favour of the public is still lacking, the round ball game numbers more players in the Metropolitan and Newcastle districts than any other code of football.”

If you are stuck for a toast this Anzac Day I will propose one that may just resonate – “Ladies and Gentleman, charge your glasses as I propose a toast: to Curly Doodson and the Swimmers!” 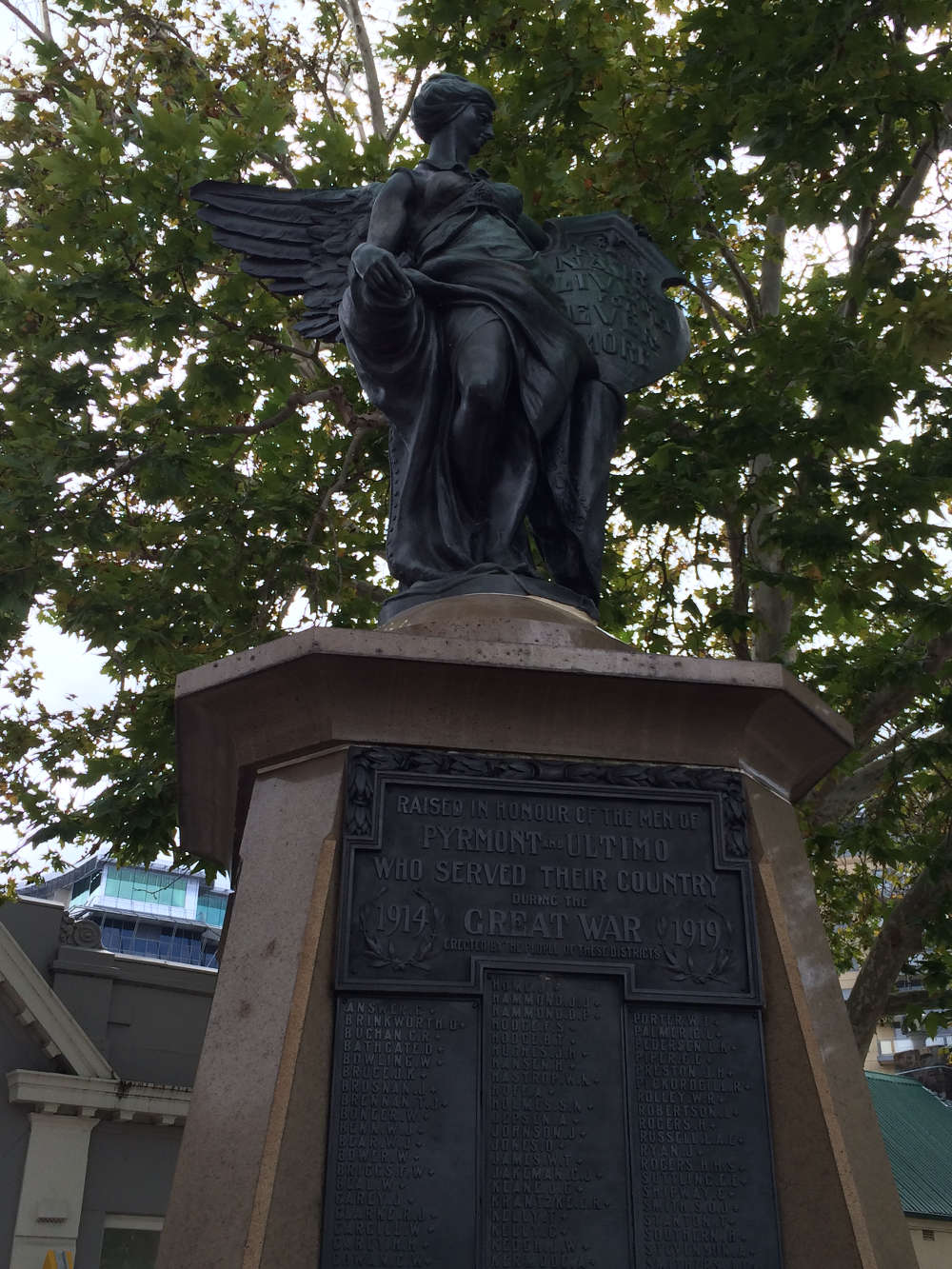 Winged Victory stands watch over those who served from Pyrmont & Ultimo