We’re heading to a decider! Just when you think Queensland has sewn it up, with a runaway try, NSW bounce right back and send the series to Game 3 in Brisbane with a 26-18 victory.

It was a strong performance from the Blues, with a dominant last quarter earning them an eight-point win.

The Blues had the first opportunity of the match, with a knock on and penalty from Queensland in the opening sets ensured pressure was heaped on the Maroons. They couldn’t withstand the early onslaught, with Blues centre Michael Jennings slipping through the defence to open the scoring.

Trent Hodkinson converted the try to give NSW a 6-0 lead. 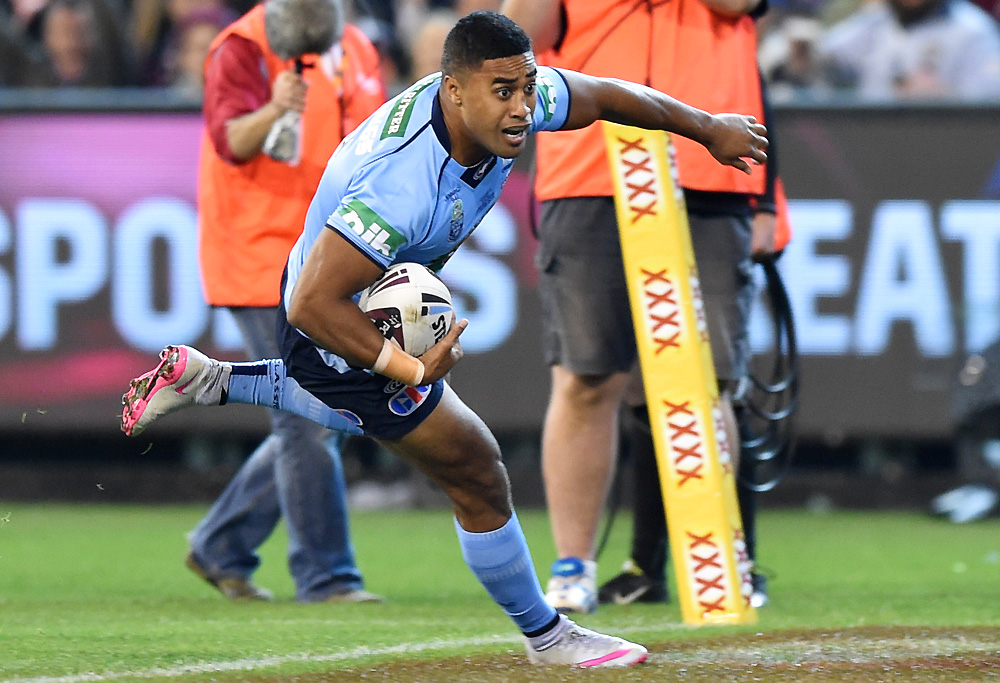 Some interplay between Daly Cherry-Evans and Johnathan Thurston led to a try for prop Matt Scott. It was set up by skipper Cameron Smith and Corey Parker who offloaded to Scott who crashed over under the sticks to give Queensland their first try.

Thurston converted to level things up in the 12th minute.

There was a brief moment of panic for the Blues as NSW captain Paul Gallen left the field with rib pain midway through the second half. Gallen had already missed the first Origin game of the series through injury, but returned later in the half . 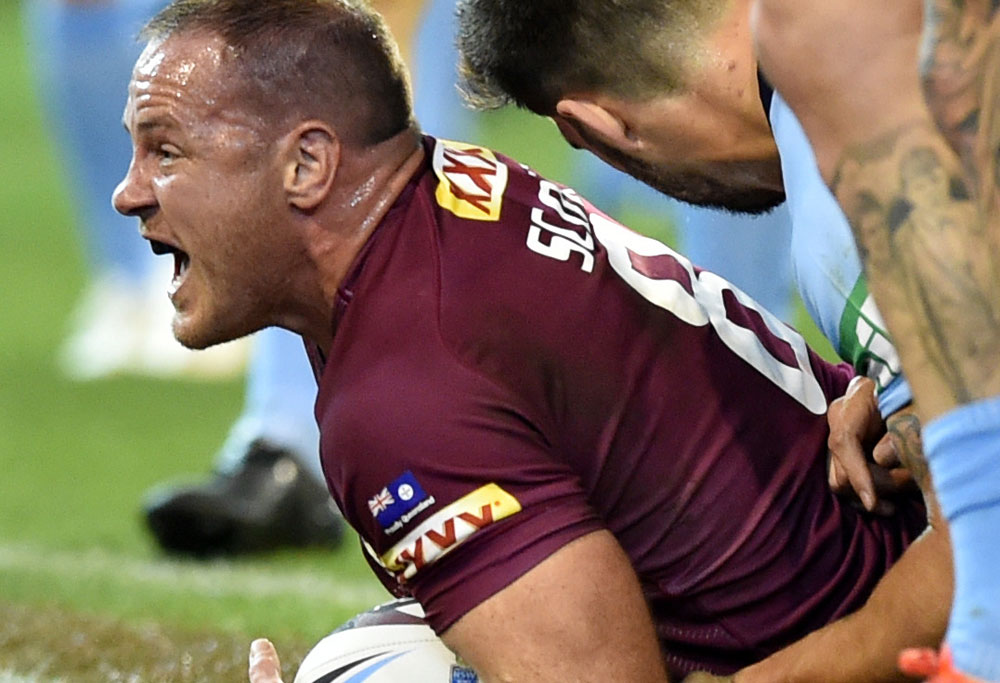 NSW centre Josh Morris claimed the second try for the Blues, with the referees ruling his forearm and hand grasping the ball good enough for a try out wide after a high kick from Mitchell Pearce.

Hodkinson converted from a difficult position to make it 12-6 after 27 minutes.

Inglis went over to score after a slick backline move from Thurston, Inglis, Slater and Boyd. It was the brilliance many have come to expect from Queensland’s backline and took the the score to 12-10.

Paul Gallen elected to take the two points from 20 metres out, halfway to the touchline.

A huge play from Cameron Smith and Thurston early in the second half saw NSW camped in their 20-metre zone early, and after three consecutive sets it took brilliant footwork from backrower Matt Gillett to split the NSW defence and score near the post.

The conversion was good, and Queensland led 16-14.

Although Queensland looked to be regaining the momentum a mistake from Will Chambers put the Maroons under pressure for two consecutive sets. They managed to resist the pressure and hold their line.

A Thurston penalty goal extended the lead to four points for the Maroons in the 57th minute, and it seemed like the Blues were letting the game meander beyond their reach.

But Aaron Woods was having none of it. He hit the ball at pace close to the line, shrugged off Matt Scott and Billy Slater to score next to the posts for NSW. 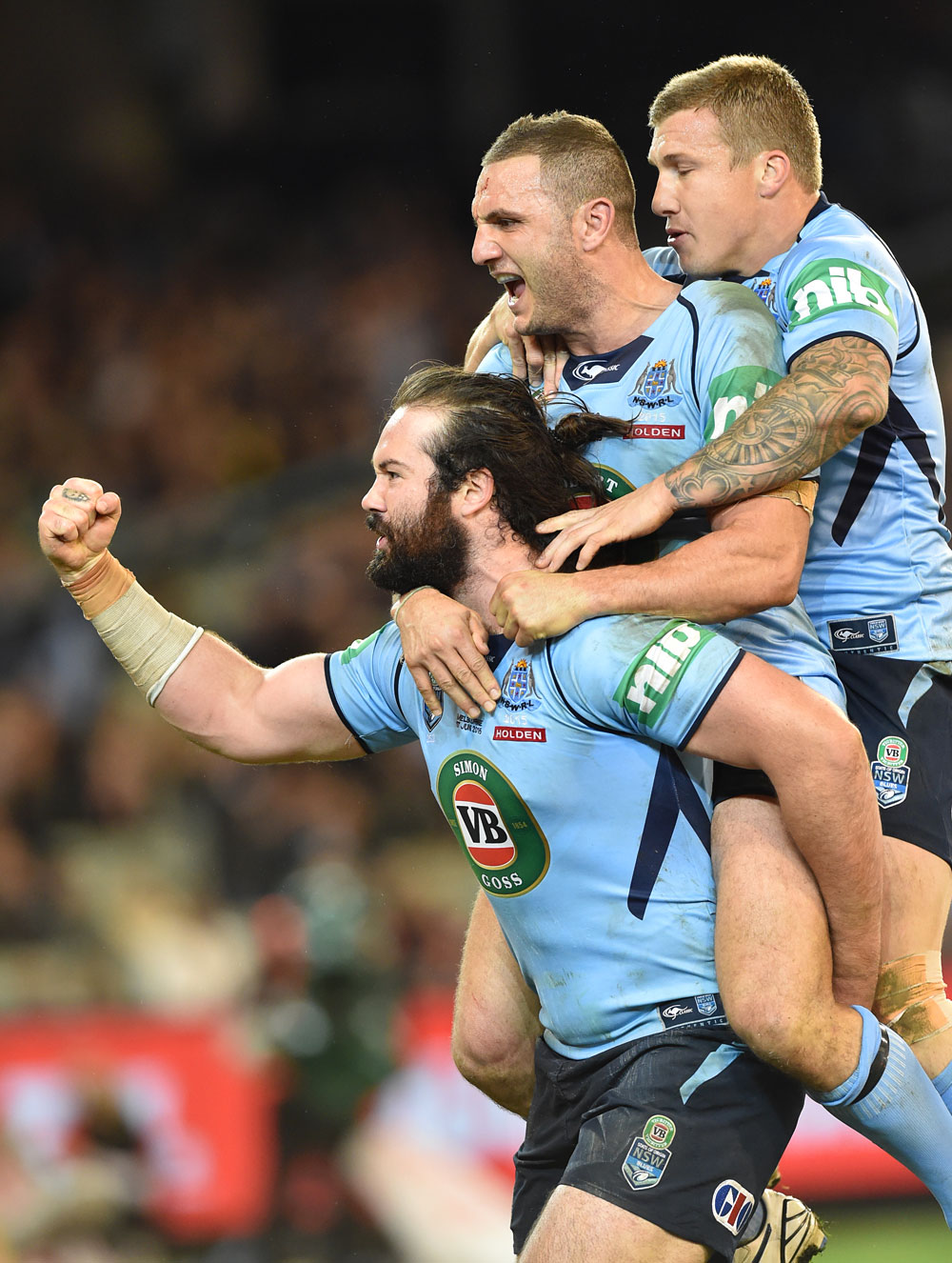 Aaron Woods celebrates a try with his Blues team on his back (Image: Joe Castro/AAP)

The record MCG Origin Crowd of over 91,000 grew in voice as the crescendo of the match approached, and Greg Inglis hared away after a lost ball from Mitchell Pearce. But it was called back due to a knock on, in another of those Origin moments that will be endlessly dissected by fans in the days to come.

Another knock on from Morgan meant more pressure on the Maroons, and it told, as Josh Dugan slammed the ball down for the Blues to take an eight-point lead with just ten minutes to play.

Uncharacteristic errors from Johnathan Thurston saw the Maroons not able to respond, with NSW earning their win.

We head to a decider in Brisbane, with the winner to be crowned State of Origin champions for 2015.

WHAT THE PLAYERS AND ANALYSTS THOUGHT OF ORIGIN II
NSW SKIPPER PAUL GALLEN SPEAKS OF BEING IN INJURY TROUBLE WITH HIS RIBS.

“Nate got me early in the back and it didn’t hurt … probably about five or ten minutes later I felt something pop so I went and got it needled up. I lasted the game but I’ll see how it pulls up tomorrow.

“I think he popped a rib cartilage. The doctor thinks he will be OK for the next game but I’m unsure if he plays for Cronulla in between.”

DALEY ALSO HAD SOME BAD NEWS IN STORE FOR QUEENSLAND

“We didn’t play as well as we wanted to in game one, Queensland were too good. Tonight we knew we had to knuckle down to the task and we did that and it was a strong performance – but we know we can be a lot better.”

“Yeah, I can say that. And it’s good to get man of the match.

“We came into camp and my main focus was to get more ball in my hands – credit to Hodko (Trent Hodkinson). He has done a great job and I can’t thank him enough.”

HODKINSON GAVE THE LOVE STRAIGHT BACK

“Yeah, we gave Jenko a bit of ball … he’s outstanding on his feet. He terrorised their right side tonight. I thought Hoffy (Ryan Hoffman), Jenko and Brett (Morris) were all really good.”

“The on the line defence tonight was very soft for Queensland.”

THE KEY BENEFICIARY OF THAT, AARON WOODS DIDN’T MIND

“The try was the best ever, I couldn’t believe I got over.”

QUEENSLAND CAPTAIN CAM SMITH STOPPED SHORT OF SAYING GREG INGLIS SHOULD HAVE HAD A TRY, BUT WILL AIM UP IN ORIGIN III

“We lost our way a couple of times. The effort’s been great but we have to fix some execution things.”