Is the Rugby Championship a poisoned chalice?

New Zealand, Australia and South Africa are arguably the greatest rugby nations in the world, boasting a combined six World Cup titles out of the seven that have been held.

When the Tri-Nations tournament was taking place, it was seen to provide an insight into which team would win the World Cup. In other words, the side that wins the Tri-Nations is the best team in the world – and hence World Cup favourites.

However, this is not the case. Many a dominant side in the Tri-Nations has not gone on to win the World Cup.

Since its inception in 1996, the side that has won the Tri-Nations in the World Cup year has never managed to win the Cup.

This is a stat that is surprising to many rugby fans. The All Blacks have won the southern hemisphere title thrice in World Cup years (1999, 2003, 2007), but we’re unable to progress past the semi final stage each time – and were knocked out in the quarter final stage in 2007.

The year in which the All Blacks did not win – 2011 – led to them winning the World Cup. Australia won the Tri-Nations title ahead of the last World Cup, and we’re convincingly knocked out in the semi final.

On three of those four occasions, other Tri-Nations sides had won the World Cup.

To be more accurate, it was the runner up team that had twice won the World Cup (Australia 1999, New Zealand 2011), while only one team has won the World Cup finishing third in the Southern Hemisphere competition (South Africa 2007).

Perhaps the resting of players for the World Cup has influenced the correlation of Tri-Nations runner ups. It has been proven that in 2011 the All Blacks fielded a poorer team for the final two Tri-Nations games, both of which they lost.

Another example was the 2007 Tri-Nations campaign of South Africa. The SARU made the decision to rest their injured top players for the final few games, saying that “they might as well not go to the World Cup”, if they had fielded their injured players.

A dominant World Cup display was a result of this. This factor could very well influence not only the Rugby Championship, but the World Cup as well.

The Rugby Championship may not be exactly like the Tri-Nations, but the same occurrence could happen. Could this be the year that the double is completed for the first time? Or will it correlate to the results in 1999, 2003, 2007 and 2011?

Jordie Barrett helped the Hurricanes to a 17-11 victory over the Highlanders in Super Rugby Aotearoa with a pass of absolute perfection to set up a try. 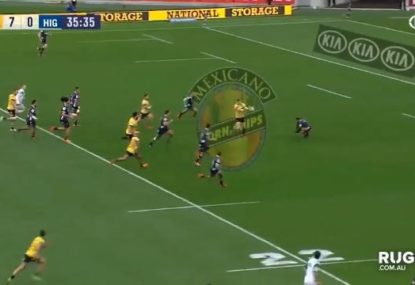 In this article, I will look at the possible back lines that Dave Rennie may decide to opt for in 2020.