MUMM: Why the lineout determines your success at scrum time

Having a dominant scrum in terrible field positions is like negative gearing. It’s nice to know you are getting something back for your effort but you’re still losing 60-70 cents in the dollar.

Such is the problem with the debate between scrum and lineout in the Wallabies at the moment – it’s great that the team has a stronger scrum, but if we don’t have field position through our kicking game and lineout, we are only getting 30 cents back for every dollar of effort we put in.

Having predominately coached lineouts in my career I am sure I am biased, but Saturday night showed some scary similarities to the Waratahs’ semi-final against the Highlanders where a New Zealand team tightened the screws playing field position with no fear at all of an Australian lineout.

In Sydney a fortnight ago, the Kiwis had two options:
1. Kick and keep it in, in which case you face Izzy, Drew Mitchell and Adam Ashley-Cooper in counter attack
2. Kick it out and essentially give away possession to a what was perceived to be a stronger Wallaby lineout

The result was they kicked less and the stats look like this: 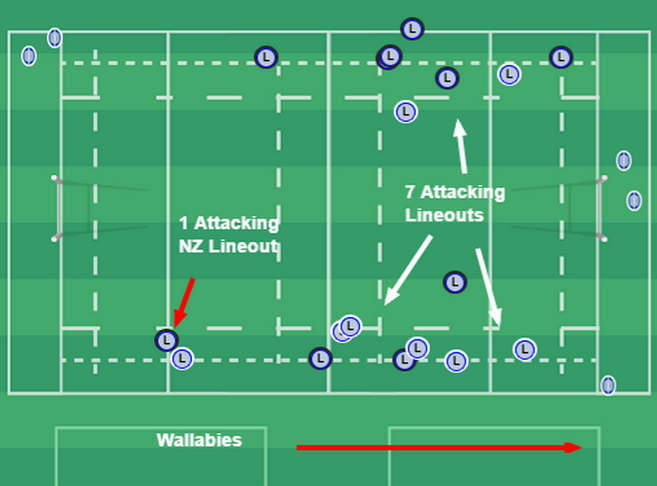 The Wallabies had seven lineouts, with five of these being in the opposition’s territory in the first half. Notably, this was aided by a strong kicking game by our back three and Matt Giteau’s left boot, undoubtedly a tactic created by the belief that the Wallaby lineout was the match of the All Blacks.

And this is the key point. Belief in your own lineout compared to the opposition’s allows you to use the lineout and a kicking game as a tactical weapon.

Teams with perceived lineout dominance use field position as a strategy.

Through this they can apply pressure by:

1. Kicking and keeping it in to force the opposition to run it out of their own half, building pressure and hoping for an error and a scrum, or even better a penalty within kicking range.

2. Kicking it to the corners knowing they can pressure the lineout, hoping to win a turnover or at worst mess up delivery, leading to a poor exit, counter attack or an attacking lineout.

Fast forward to the much more difficult to watch Eden Park Test, and look at the difference in Lineout attack. 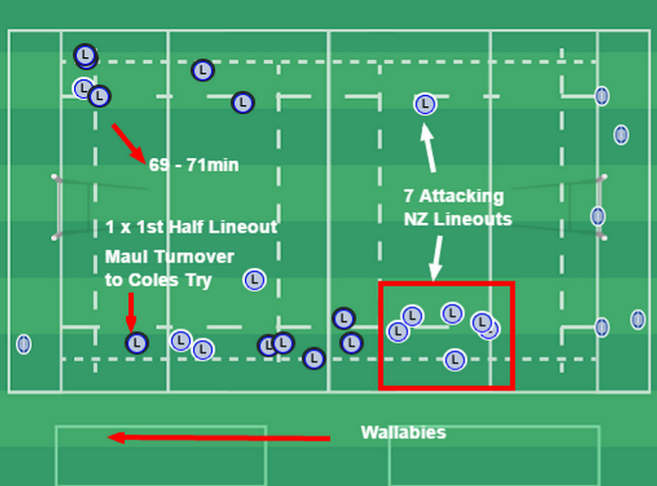 The results are almost a perfect mirror.

Seven attacking All Black lineouts, built off a New Zealand kicking game that showed no fear of the Wallaby lineout, and even less of our attacking back three in defence.

Now you might say that the tactic was more about Quade Cooper than it was about the lineout, and there might be some truth in that, but the fact is that the All Blacks had the option to take that gamble because, at worst, they were giving away possession to have it kicked back and attack from counter or from a lineout under no pressure from Australia.

So how does this relate to the scrum I hear you say?

Well, the thing about the scrum is that you can’t force them to happen unless you want to deliberately knock on your own ball, which is a very front row way of rationalising Australia’s handling issues.

Field position puts pressure on teams, and an aggressive defensive line puts skills to the test. But against world class side like the All Blacks, even a defensive effort like that at ANZ doesn’t necessary yield results as shown below: 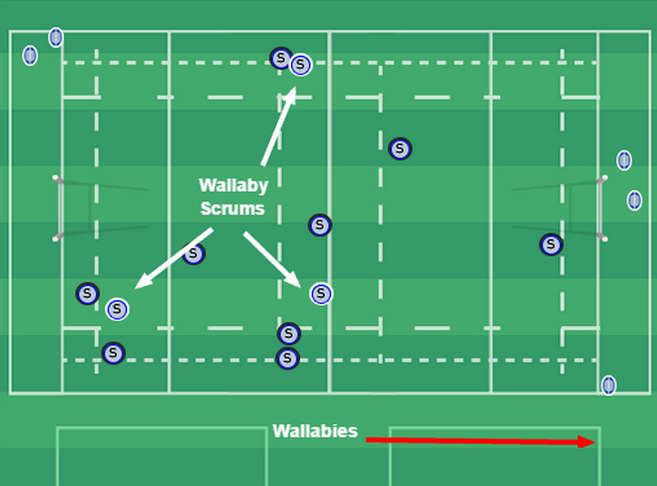 For all the field position we had, all the praise our scrum deservedly won, and the pressure we put New Zealand under, the Wallabies had zero attacking scrums.

Yes, we did well in our defensive scrums, but we were relieving pressure not building pressure!

Compare that to the Eden Park game and you start to see a pattern. 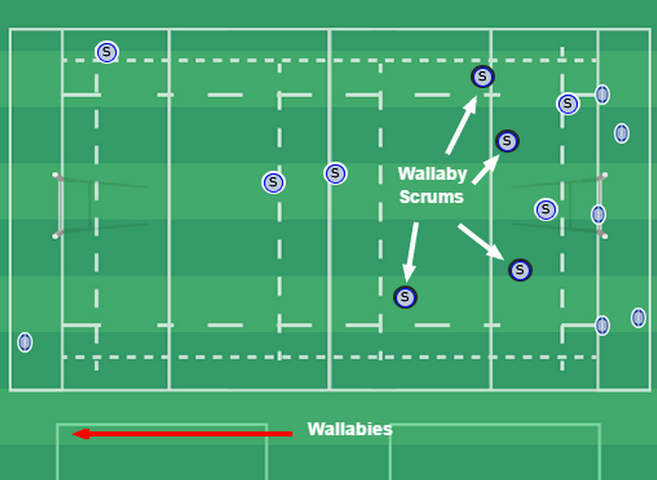 A strong scrum is a fantastic thing, and a necessary part of a strong foundation, but it is greatly over-rated if it is utilised in the wrong part of the field.

And – you guessed it – to utilise a strong scrum, you need a kicking game and lineout that can win you the field position to even start allowing the forwards hard work to begin putting some positive return back in to your pressure account to influence a game.

I’m keen to hear your views on how big an issue this is for our World Cup chances in a pool against England and Wales.

Next week we’ll look at the idea that where a team wins their ball in the lineout is just as important as what part of the field they are on at the time.

Greg Mumm’s playing career was cut short at 19 with a dodgy knee. Since then he has coached everything from schools up to a couple of World Cups with Fiji. Having previously specialised in the ball winning aspects of the game, he is now passionate about athlete welfare and transition, and the strategy of current teams and coaches.

The Roar welcomes Greg, who is a former coach at Fiji, Sydney University and the Waratahs, as an expert columnist.