With only two hookers announced in the Wallabies World Cup squad, there has been plenty of discussion about whether we will be capable of winning our own ball.

While the debate on this has been fierce, there are two points not discussed so far:

1. Where can we win our own ball – front, middle or back.
2. Where are the opposition able to win their ball?

Where can we win our own ball
In Sydney, the All Blacks won seven out of their nine lineouts at the front, compared to Eden Park where they won eight of their 11 at the back. This is important because it is another reason why the lineout is a vitally important weapon in controlling the game.

Front ball has some inherent problems in terms of how it limits attack;

Firstly, it lengthens the halfback’s pass. This may not seem that important, but the pass from 9 to 10 is the one constant in first phase attack, and a longer pass creates two opportunities for the defence:

Secondly, it places pressure on the delivery options.

Front ball has limits – off the top is dangerous as it lets the end of the lineout and the backs fly off in defence. Mauling is an option, but the defence can rip in, knowing the sideline can be used as a defender, and unless you maul past the 10m defensive line, all you have done is bring the backline defence up and then have to play off a sideline.

Some teams bring it down and play to the back of the lineout, but essentially you are just recycling the ball close to the 15m and bringing the defence up, negating the attacking space.

With back ball you have free choice of delivery – off the top, drive or down and pop, including hitting back to the blind. All of this uncertainty makes the defence sit on its heels and watch, increasing the chance of making the gain line.

Even mauling off the back is easier, as at least some forward defenders have to cover the blind, meaning fewer to stop the rampaging hoards.

Combined, this can make a huge difference between the attack making the gain line or not – in the vicinity of two to three metres in the 10 channel and up to 10 metres when you get outside the 13 channel. This is vital in the bigger scheme.

Essentially the race from set-piece is whether the attack can organise themselves faster than the defence. Whoever wins the gain line has the upper hand in this race.

By the third phase most defensive systems have made the transition from set-piece defence – a game of chess aimed at attacking defensive weakness – to phase defence, which is more like a war of attrition relying on an opponent’s mistake.

If you win the gain line, you place the defence under immense pressure to scramble and regain control. This takes physical and mental energy and often leads to mistakes. 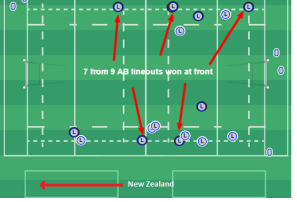 In Sydney, as well as the field position strategy mentioned last week, the Wallabies were able to restrict the All Blacks to front ball (the first 3m of the lineout) eight times.

This pressured Dan Carter and allowed our outside back to tear in to the New Zealand attack, catching them on their side of the gain line, forcing mistakes and turnovers.

Key to this was the ability to bring David Pocock and Michael Hooper into the game and let them attack the ball, with the All Black support having to run back to try to nullify the threat. 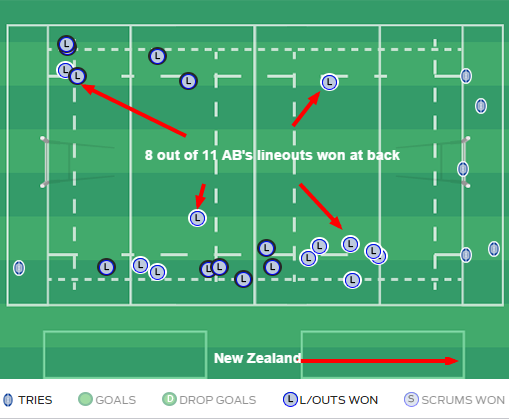 Fast forward to Eden Park and New Zealand’s kicking game gave them field position which they capitalised on by getting gain-line advantage through easily dominating the back of the lineout.

The result was a disorganised Australian defence, minimal pressure on the ball and recycle, and All Black forwards rampaging in to the contact zone.

Where you win the ball alone is not going to win you a game, but when you add up field position, position of the jumper, and options in terms of delivery choices, you start to build real pressure.

In Sydney the Wallabies had five lineouts thrown to the middle or back in attacking areas. We lost one, but the other four the results were:

So as we continue to debate the Australian lineout heading in to the World Cup, there is more to think about than just whether there is a W or an L on the scoresheet.