Two weeks into the 2015-16 NBA season Kawhi Leonard looks to be making the leap towards becoming one of the next NBA superstars.

For the casual Australian basketball fan, Kawhi Leonard may not be a household name yet.

Despite playing excellent defence on LeBron James and being an instrumental part of the San Antonio Spurs’ crushing 2014 Finals victory over the Miami Heat, Leonard’s public perception remains out of line with his true ability.

This is down to a lack of flashy highlights and the uncanny ability of the Spurs to consistently fly under the radar. Nonetheless, Kawhi is a budding superstar and the most important player on a San Antonio team making one last run at a title in the Tim Duncan-Tony Parker-Manu Ginobili-Gregg Popovich era.

The 2014 Finals against the Heat was our first glimpse of the two-way force that Kawhi could become. Acting as the primary defender on the best player in the world, Leonard consistently frustrated King James.

On the other end of the floor Leonard showcased a rapidly improving offensive game as he put up 23.7 points per game, shooting a scorching 68.4 per cent from the field. Leonard’s overall excellence resulted in a 4-1 series win for the Spurs and a Finals MVP trophy for himself.

All signs pointed to a breakout 2014-15, however injuries caused Leonard to miss a chunk of the season’s first half and affected his shooting ability when he did return to action (career low 47.9%). Despite the injury-interrupted start, his defensive prowess remained unfazed as Leonard terrorised opposing ball handlers all over the court, drawing comparisons with prime Scottie Pippen and even a Sharktopus on his way to winning Defensive Player of the Year.

That brings us to the current season, where early indications are that a fully healthy Leonard is ready to assert himself as one of the league’s best players.

Through seven games Leonard’s 22.1 points per game is 5.6 points higher than last season. Most of that uptick is a result of the increased offensive role the Spurs are asking Leonard to play, as he is taking almost five more shots per game compared to last season.

Most impressively, this increase in shot volume has not affected his efficiency as Leonard is also shooting a career high 52.8 per cent from the field, including an above league average 37.5 per cent from the three-point line.

Interestingly, NBA.com’s tracking data shows that Leonard is actually shooting worse when he is wide open (37.5%) compared to when there is a defender within 0-4 feet (47.9%). This number should increase as the season progresses given that Leonard shot 45.5 per cent on similar wide open looks during the past two seasons.

By this logic, it would also be reasonable to suspect that Leonard’s field goal percentage when being tightly guarded may be due for some regression. However, Leonard actually shot 53.9 per cent over the last two seasons when a defender was within 0-4 feet, indicating that not only is his current efficiency level sustainable, but that we might actually expect to see some improvement in this area as the season unfolds.

As a further result of his larger role in the Spurs’ offence, Leonard’s usage rate – a measure of how often a player finishes his team’s possession with a shot attempt, free throw, assist or turnover – is up to a career high 27.3 per cent. That rate is first at the Spurs and in line with point guards such as Eric Bledsoe and John Wall. This spike in usage has coincided with a career best 8.4 per cent turnover rate, further highlighting the massive strides Leonard is making on offence.

The low assist numbers (career low of 6% assist rate) are a curiosity, particularly within the Spurs’ system, which emphasises quick ball movement to open shooters. Passing lanes will open up as defences increase their focus on limiting Leonard’s scoring ability and he should be able to find uncovered teammates for quality looks more often.

Defensively, Leonard remains an absolute monster. NBA.com’s defensive tracking metrics show that opponents are shooting below the expected rate from all areas of the floor when being defended by Leonard. His first half against the Thunder in the Spurs’ season opener was a defensive masterclass, peaking with an incredible block on four-time NBA scoring champion Kevin Durant that has to be seen to be believed.

Going into the season, the Spurs were a popular pick to challenge Golden State for Western Conference supremacy, largely due to the addition of LaMarcus Aldridge in free agency.

However, with Aldridge still adjusting to a new team and the ageing Big Three of Duncan-Parker-Ginobili on their last legs, the Spurs will only go as far as Leonard can take them. Judging by his early performance, no one should be surprised if they go all the way.

What time do the Boomers play Germany in the Olympics basketball tonight?

Coming off a thrilling 86-83 win, the Boomers are prepared to do it all again against Germany tonight and go undefeated through the basketball group stage at the Tokyo Olympics. 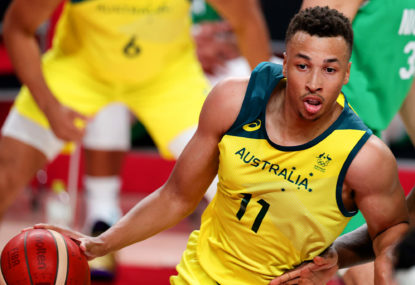 What time do the Boomers play Germany in the Olympics basketball tonight?

The meteoric rise of Josh Giddey is a fairytale. 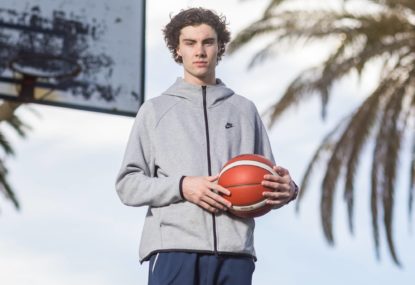