The Penrith Panthers are coming off a disastrous 2015 NRL season, which saw the 2014 finalists slide to 11th position after injury tore through their playing squad.

With a new coach on board, Penrith will be hoping for a better year with far fewer injuries.

Coach Anthony Griffin has plenty of young talent in his squad and will be hoping he can convert them into superstars capable of competing in the finals series.

Rookie watch
Having won the Holden Cup in 2015, the Panthers have plenty of exciting players yet to make their debut.

The most exciting – and one of only two who are likely to make their debut in 2016 – is Junior Kiwi Te Maire Martin. He was selected as a part of the New Zealand train-on squad at the end of last year without having made his NRL debut, and is one of the most exciting young halfbacks in all of rugby league.

Over two years in the NYC, Martin played 50 games, scored 17 tries and had a hand in even more. In a couple of years time, the Waikato junior could be partnering Shaun Johnson in the halves for New Zealand, and is set to become one of the best halfbacks in the NRL. Te Maire is in contention for the halfback role, with Peter Wallace likely to be pushed to reserve grade.

Another Junior Kiwi representative, Sione Katoa, is just an injury away from making his mark in first grade. The only player standing in the Penrith junior’s way of appearing in Griffin’s first-grade side for Round 1 is James Segeyaro, and with Katoa the only other hooker in the Panthers’ top 25, he is almost a certainty to run out on the park for his NRL debut in 2016.

The most talked-about Panthers rookie, Zach Dockar-Clay, spent four years plying his trade for the Parramatta Eels in the Holden Cup, with his 78 games in the NYC making him the third-most capped player in under 20s history – behind Wayne Ulugia and Jayden Berrell. While many Penrith fans thought he would be the first in the pecking order if Jamie Soward sustained an injury, Dockar-Clay is not attached with the NRL squad and sits behind Te Maire Martin. That said, the Junior Kiwi is still a good chance to make his debut in 2016.

Under pressure
The rugby league world was left in shock when Cleary was sacked as Panthers head coach in mid-October. The appointment of former Broncos mentor Anthony Griffin as his successor was arguably even more surprising.

Griffin has already stirred the pot at Penrith, with last year’s captain Wallace set to be pushed out of first grade in favour of Matt Moylan, who will make the switch from fullback to five-eighth to accommodate new recruit Peta Hiku.

‘Hook’ heads an all-new coaching department, with Garth Brennan replacing Trent Barrett and David Fairleigh as Griffin’s lone assistant. Steve Georgallis and Cameron Ciraldo will mentor the NSW Cup and Holden Cup sides respectively, as the Panthers hope they can catch up to their five-year plan, which expired last season.

Who will partner Jamie Soward in the halves?
The most talked about potential partner for Jamie Soward is Matt Moylan. The local junior has been slated to follow in the footsteps of Darren Lockyer, Anthony Milford and Michael Morgan by making the switch to five-eighth, a move which many believe will bring out the best in him as a player and give him a better chance at making his State of Origin debut. Moylan is the current favourite to wear the number 6 jersey if Griffin does decide to push Wallace out of the starting side.

Another candidate is young backrower Bryce Cartwright. A versatile ball-runner able to create plays, Cartwright impressed last season when he filled in at five-eighth during the Panthers’ injury crisis. But realistically, the 2013 Holden Cup Player of the Year is unlikely to make the switch, and will probably be seen in the back row due to a shortage of forwards.

Other contenders include Will Smith, who played in the halves during Penrith’s 2014 finals campaign, and new recruits Martin and Dockar-Clay. Smith is the outsider for the gig and is likely to spend most of 2016 in reserve grade, however if injury hits, the former Newcastle Knight will be of great help due to his ability to adapt to any position in the backline or halves.

Expect Matt Moylan to be first choice, but if the St Clair junior opts to stay at fullback look out for Te Maire Martin. 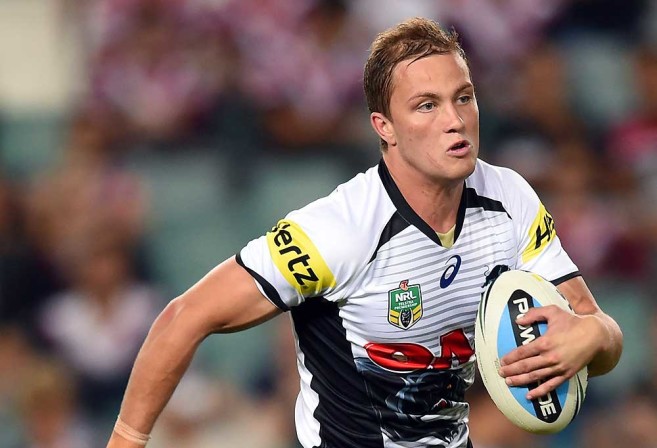 Can Josh Hall successfully make the switch to rugby league?
Former Gold Coast Suns ruckman Josh Hall will hope to become only the third player in history to have played both Australian rules football and rugby league at the highest level, after Karmichael Hunt and Israel Folau.

Hall played seven AFL games, having been invited to join the Gold Coast Suns Academy in 2011 after he showed promise from his high-jumping background, which saw him fall just two centimetres shy of qualifying for the 2012 London Olympic Games.

Hall played rugby league as a kid, spending most of his time at fullback. He is expected to start in the season in the NSW Cup, but all eyes will be on the winger as he attempts to put his name in the history books by making a successful code switch.

Are Penrith’s forwards good enough to propel them into the finals?
The Panthers have come under fire recently for stocking up on back rowers and leaving their front row thin, and they had to offload a series of players to get Merrin’s signature without going over the salary cap.

They may not have the biggest forwards but they have one of the best in terms of running the ball and youth.

The Panthers have a relatively inexperienced pack, with Merrin, Elijah Taylor, Sam McKendry and Jeremy Latimore the only players to have made over 100 NRL appearances. None of the remaining members have played over 50 games.

Youth is key for the Panthers however, with Cartwright and Reagan Campbell-Gillard already rated as among the best young forwards in rugby league.

The inexperienced group though simply can’t carry the weight of the club and will therefore not be able to deliver a finals appearance.

Round 4 versus Dragons
Sunday, March 27, 4pm at WIN Stadium

Trent Merrin gets his first run against his old team when Penrith take on the Dragons in Wollongong early in the 2016 season.

With the Dragons possessing a similar roster to last season, it will provide a huge challenge for the Panthers. This will also be Moylan’s first opportunity to impress Blues selectors ahead of State of Origin, with the Penrith junior to go head-to-head with incumbent New South Wales fullback Josh Dugan.

The Round 4 match-up is sure to be exciting for fans of both teams, with Merrin and Moylan to take centre stage.

Round 5 versus Eels
Sunday, April 4, 4pm at Pirtek Stadium

Penrith’s early season match-up with arch-rivals Parramatta is just the game they need to get their season off to a strong start.

The Eels and Panthers are almost on par, and will likely both be competing for the same spots on the fringe of the eight.

If Moylan makes the move to five-eighth, he will get a chance to go up against Corey Norman, who also made the switch from 1 to 6 when he moved to Parramatta from the Broncos in 2014.

It will provide a much-needed challenge not just to Moylan, who is a leading candidate to take the Panthers captaincy from Wallace, but to the whole team.

Prediction
Penrith will come dangerously close to the finals, but with so much quality opposition they will finish in 11th place.