Welcome to The Roar’s NSW State of Origin Game 3 player ratings, where the cold hard light of day intrudes despite a victory.

That’s because despite all the explosions of joy and sentimentality last night, the reality is that NSW didn’t actually play all that well. Not at all.

Yes, it’s great for NSW fans that they were finally the team to steal victory at the death. But the worry is that this lucky, and many Queensland fans would argue, referee assisted, victory will only further delay the clearly necessary changes to the coaching set up and roster.

With all that being said, here’s how I saw the performances:

The long awaited debut for the Tigers fullback was very nearly the fairytale everyone wanted as he came oh so close to scoring the game-winning try. Overall Tedesco was very good and among the best players on the field. He will be odds on to hold his spot next year, perhaps even with the return of the Hayne mass transit system.

Josh Mansour – 6
Had a mostly solid night so it is justice in some ways that his slip and fall before Darius Boyd’s try didn’t end up costing NSW the game. As with Tedesco should be favoured to hold his spot in 2017.

Josh Dugan – 4
Had a poor game even before his night was prematurely ended by a Greg Inglis super-duper-mega shoulder charge. Forgot how to defend for Queensland’s soft opening try. Must improve.

Blake Ferguson – 5
After somehow holding his spot after an awful Game 2, Ferguson was largely awful for all but the last two minutes.

As with Jennings, one great run doesn’t make up for the rest of the game. He will be another under the microscope for next year.

Matt Moylan – 5
It was billed as Laurie’s bold and gutsy selection gamble but in the end it was… kinda nothing really. Moylan didn’t embarrass himself in the halves in attack, and indeed he defended quite well when NSW didn’t hide him. But he also didn’t excel as a playmaker and its hard not to wonder what that 15 minutes before half time would have looked like with a genuine half instead.

James Maloney – 7
The selection of Moylan at six left Maloney as the only recognised half for NSW, which meant he shouldered virtually all of the playmaking and kicking load. Overall its fair to say he had a good game but if the result had gone the other way serious questions would have been asked about the first half stretch where NSW had 58 tackles to 17 and still couldn’t score. Likes to needle.

Aaron Woods – 7
Another very strong game from the longhaired Tiger. Woods was particularly good through a huge opening stint of 34 minutes. Although as has often been the case Daley’s insistence on wringing a big first stint out of him left him a bit short on energy for the second

Robbie Farah – 5
Made lots of tackles and ran the ball a handful of times but was a bit of a nothing game overall. Many people want Farah out of the team and frankly this performance won’t be one his defenders use to help his case.

Paul Gallen – 6.5
Made some strong carries early and the offload to set up the Frizell try was excellent. But overall Gallen’s work rate was down for him and he was used bizarrely in the second half for one ten minute stint and one three minute stint. Kicked conversion gives him a bonus half point. 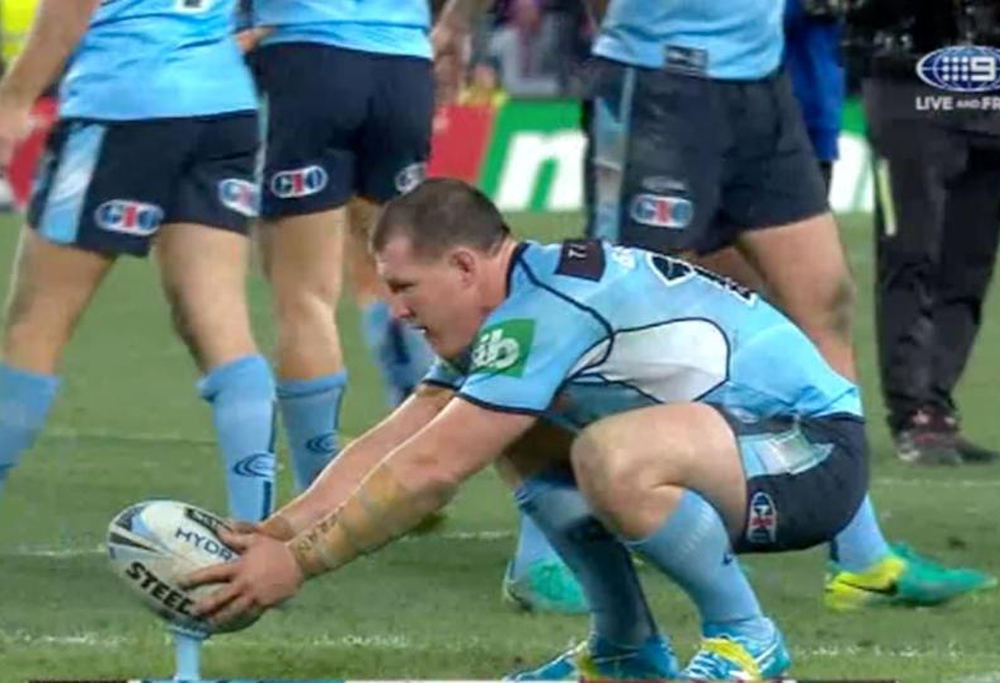 Josh Jackson – 7
Had a strong first half and even his second half was going swimmingly until he dropped one ball in the tackle and was forced over the sideline in another late on in his stint. A strong series overall for Jackson who did a lot of the dirty work for NSW.

Wade Graham – 6
Another long awaited debut but Graham was distinctly less effective than Tedesco. Some of that was lack of ball and some was perhaps a level of unfocused urgency. Will be in the running for a return next year but no sure thing. Origin isn’t easy on debut.

Tyson Frizell – 7.5
The raw numbers may not be impressive at ten carries for 73m but the raw power certainly was. Another player who suffered from Laurie’s poor use of his bench Frizell waited far too long to rejoin the game, only returning in the 67th minute. He used his time well however and projects as a NSW linchpin for years to come.

James Tamou – 5
Relegated to the bench for this one and didn’t exactly rise to the occasion. Ten carries for 85 minutes and never especially threatening.

David Klemmer – 5.5
A quiet game for Klemmer with the highlight perhaps being blowing his top after Jennings had scored the winning try.

Andrew Fifita – 4
If you’re after some rocks or some diamonds then Andrew Fifita is the man to take a guess on. Combined some terrific power running and some sublime passing at times with a truly idiotic sin binning that confirmed all of the worst impressions of him. Questions will be asked in 2017 if he is worth the risk.

Jack Bird – 4
Forced into the right centre role after Dugan’s injury Bird never really got a chance to show his wares, but covered out-of-position.