The Back Room: Another Roar Wallabies' faux exclusive

The Roar has obtained an exclusive peek into some of the Wallabies back-room discussions which were both revealing and completely fabricated.

CHEIKA: Gather round men we have much to discuss. Right then, we have an eight problem.

BYRNE: The ABs noticed that ages ago

MARIO: Did someone say Maccas? I’ll have three happy meals and…

CHEIKA: Shut up Mario what’s there to be happy about?

GREY: Really? I didn’t know you actually had one of those. Show me. I don’t believe you.

CHEIKA: Yeah…um…actually Larks, I’d like to see that myself as I haven’t seen one so far this season

MARIO: Yeah I have told the forward pack we need to get good ball to the backs. Once the boys got the joke we decided pick and go and the rolling maul is the way to go. Bit like your Brumbies eh Larks?

LARKHAM: Yeah really wise guy. Well winning the lineout might help. Lost another three on our own throw again last week. So much for improvement eh?

MARIO: I never read ‘fix the lineout’ in my contract. It was just one word…Scram…oh sorry I meant Scrum…sorry my English is a work in progress you know guys, a bit like the lineout for a year and half.

LARKHAM: Mario there is plane for Argentina leaving at 2pm with some room left for you in the baggage compartment.

CHEIKA: Now hang on a minute. I decide who stays and who goes around here…(pause) That’s strange I didn’t know I could travel with all my baggage…Anyway as you all know making decisions and sticking to them is my greatest strength. That’s why I’m the one who makes them. 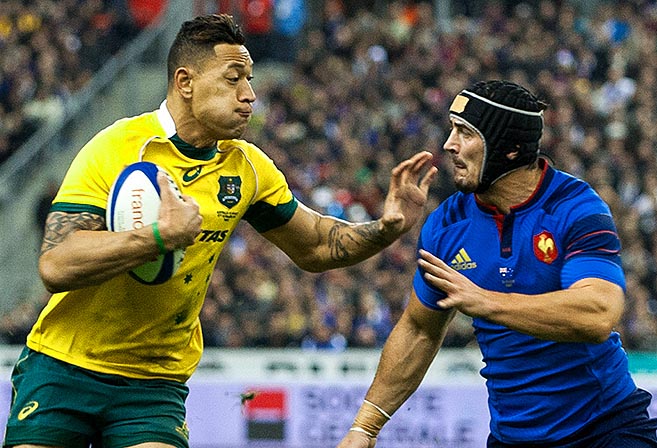 MARIO: Funny, the locks were just saying the same thing the other day. Oh yeah Chek, I brought the lucky dip box for the no6 position again boss.

CHEIKA: Well done mate, that’s worked a treat that has. But ahhh… take Stephen Moore’s name out of it and replace it with Reece Hodge…no better still Nathan Sharp.

CHEIKA: Nah, nah mate. He’s making a comeback. Took a bit of yelling, but he didn’t want to become deaf in both ears so now he’s on board.

GREY: But he plays lock?

CHEIKA: Yeah I know, but playing players out of position is the way forward.

BYRNE: Do any of them know which way forward is? You know the try line direction?

LARKHAM: (stands up) Attention please! (pause) Anyone want to hear my damn plan or what?

GREY: Is that a serious question?

CHEKIA: Miles away. Like trying to find one in a cruise liner after you’ve had a few.

BYRNE: So that means I’ll be gone awhile?

BYRNE: This way is it?

(Cheika starts yelling at him to sit back down)

BYRNE: Hey steady on Chek. I’m not one of the player’s buddy. And how’s that been working for you huh?

CHEIKA: Of course not. Sorry Bernie…and ah, worked well actually after six games. These things take time to sink in with some of the guys you what I mean Bernie?

BYRNE: Bernie? Who the hell is Bernie…BERNIE? What am I? Your pet rabbit?

CHEIKA: Yeah sorry, but now you mention it, I had a guinea pig when I was kid called Bernie…Sorry Micky won’t happen again.

BYRNE: MICKY! So now I am a mouse am I? Thanks Goofy which is about how the game plan has been looking all season.

(Larkham sits down and begins muttering to himself)

LARKHAM: It’s…It’s …well I mean this was two years in the making, and it will take us to No. 1 in the world guys. …

(The rest finally look eager to hear it)

LARKHAM: It’s…oh gosh, I’m so excited I can barely bring myself to say it…’Get the ball to Folau!’

(Complete disbelief all round)

BYRNE: That plan isn’t a bloody plan, it’s a ploy, and it sure as hell ain’t working.

GREY: Yeah and Izzy hasn’t been working all that well at fullback either lately.

CHEIKA: Yeah but he’s good under the high ball

LARKHAM: But his positional play ain’t crash at times

CHEIKA: Yeah but he’s really good under the high ball

BYRNE: His tactical kicking is ordinary for a fullback. I mean com’on Chek seriously this is me you’re talking to?

CHEIKA: Yeah but his is really, really good under the high ball

GREY: His reads in defence at fullback are not always great either

BYRNE: Teams have worked out plans to nullify his effectiveness from the back

CHEIKA: Yeah but have you seen him under the high ball? I mean do you guys know how good he is?

LARKHAM: You know he wants to move to the centers or wing right Chek?

BYRNE: On the wing he can get more involved and we…

CHEIKA: Can get the ball to Folau…yes actually I’ve always had a soft spot for that plan. You guys are right, fullback is the best position for him, and to think I was almost ready to move him. Man what was I thinking? Whew thanks guys.

LARKHAM. What do you mean, you have always had a soft spot for this plan? You already know about this plan? Right then, I demand to know who leaked it! I don’t believe it. Someone trying to steal my genius. The hide of some people

GREY: Ahhh…umm small point Steven, but I think I have read that plan in the newspapers over and over again forlornly trying to simply the answer to our attacking issues. By-the-way, did you take your medication this morning?

LARKHAM: Sorry Nathan remind me how many points your defence has leaked since the WC final? And as for you (looking at Byrne) you…you…you’re the…

BYRNE: The former skills coach to the greatest side in rugby history, that’s right that’s me, and in the coaching world you are…sorry remind me again?

CHEIKA, LARKHAM and GREY TOGETHER: What the?

BYRNE: You know what I mean guys, you are just in denial. The All Blacks have players that just like a great racehorse, come from a top stable. It’s in them. They are born to it.

GREY: No one is born to it mate.

BYRNE: Oh yeah? They’re in training to be an All Black from the time they can catch a ball and their mums and dads know as much about the game as some coaches and they teach their kids.

They’re thoroughbreds. They have former All Blacks coaching at some schools as well. The horses that don’t quite make the grade, they let go to other lesser stables…like…well…um… like us in Australia.

CHEIKA: Now that’s enough…Quady is well…he is like, I don’t know…

CHEIKA: Well never mine actually, and it was a guinea pig Micky. No Quady is more like a lab rat…you know he’s been experimented with too much. He needs nurturing. Needs to be shown the way out of the maze.

MARIO: Yeah that’s the thing, the All Blacks need less nurturing…Yeah that’s it. They have the best coaches too. Depressing…

CHEIKA: Mario I have a car waiting to take you to the airport. IRB 2015 Coach of the Year?

MARIO: But didn’t the All Blacks only lose one Test that year? Didn’t they go unbeaten in the world cup for the second time in a row? Didn’t they win the Bledisloe yet again? Didn’t they become the first side to win back-to-back world cups in history? Man what does a coach have to do to win it?

CHEIKA: Security! Security! Arrest this Argentinian, for being un-Australian!

LARKHAM: Me, me, me…Pick me Cheks, it’s my turn Cheks this week to pick the number 6

(Larkham picks out of the box and reads the card. He looks deflated)

LARKHAM: Oh com’on, not Mumm again. That’s not how it’s supposed to work.

BYRNE: I was hoping for Reece Hodge actually.

GREY: Me too. What about Mackers? Who is going to replace him at eight?

CHEIKA: So who is our next best number seven?

GREY: The position is eight boss?

CHEIKA: Exactly. so who do we have who is our next best specialist seven?

BYRNE: No one left really. Gill has left the building.

CHEIKA: Yes, well, this process isn’t quite going to plan. We need to change it up.

MARIO: May as well, that’s what we are best at. By the way who is the locking combination against my old Argie boys? Shall I get out the straws?

CHEIKA: Argies? We’re not playing the Argies. For goodness sake it’s the first Test against England on Saturday. Where the hell have you been?

GREY: Um Cheks that series is over

CHEIKA: What do mean over?

MARIO: Yeah we lost three zip. One of the worst series in our…sorry your history against England on home soil.

CHEIKA: Noooooooooooo…you are all lying I tell you. How dare you! It never happened.

BYRNE: Boy the sooner he gets over that post-traumatic stress the better eh?

(Larkham gets up to leave)

(He wanders in the direction of Cheika still muttering to himself)

BYRNE: Now guys you all know the plan right?

BYRNE: Nathan, you may not have seen this before, but watch those guys in black jumpers – this is what is called great defence.

GREY: Hang on, I remember this game. We didn’t even score a try.

BYRNE: Gee you’re ‘catch on’ speed is like our defensive realignment. Okay you guys ready for this?

GREY AND MARIO TOGETHER: Oh yeah boss we’ve been waiting for this

BYRNE: Waiting? Waiting for what?

BYRNE: Ah yes the fine art of direction.. Follow me boys I’m sure I saw a bar on the way in.