Flares, they’ve been a constant thorn in the side of the FFA, and no matter how much they try, there are those that just refuse to listen to the cries for them to be abandoned.

Their use at football matches has always raised media attention and what would usually follow was some rather unwarranted and heavy handed comments branding football supporters as rioters, criminals, terrorists and hooligans.

These comments have typically resulted in fans being upset as they’ve usually been made by those who have have no interests in the game.

Instead they constantly criticise almost all aspects of football in this country – and let’s be frank, if flares are our only concern, we’ve got it pretty darn good compared to the numerous off field indiscretions and incidents faced by other football codes.

There have been violent incidents in the past on display by fans at AFL matches and league matches that are of a much greater concern, yet the media’s approach is always less critical and brandish.

And how often are the back pages plastered with player indiscretions regarding the use of drugs, match fixing and many other offences that bring their game’s into disrepute.

Don’t get me wrong, each code has their issues, but I think it’s fair to say football has maintained a fairly clean image since the inception of the A-League. And before I’m branded as a non-supporter of the other codes, I’m a passionate Brisbane Broncos supporter but disheartened league follower due to players’ constant wayward behaviour.

But, I digress. The use of flares does cause angst within the football community because of the subsequent action the governing body are seemingly forced into taking each time.

Opinions vary regarding the use of flares but there is one thing that is a given, they’re banned.

There are those within who feel it enhances an atmosphere and point to its use in other footballing countries. Others will state it is not the responsibility of the paying patron to point out the culprits and that they’re there to enjoy the football – plain and simple. Some will state they don’t believe they’re that bad and aren’t fazed by their use, but would prefer to not have the issue of points deduction constantly being a concern when a flare is lit. And there are those who bemoan their use and will state how it is dangerous, damaging to the leagues image and how it is illegal.

To be fair, I think each are valid points. 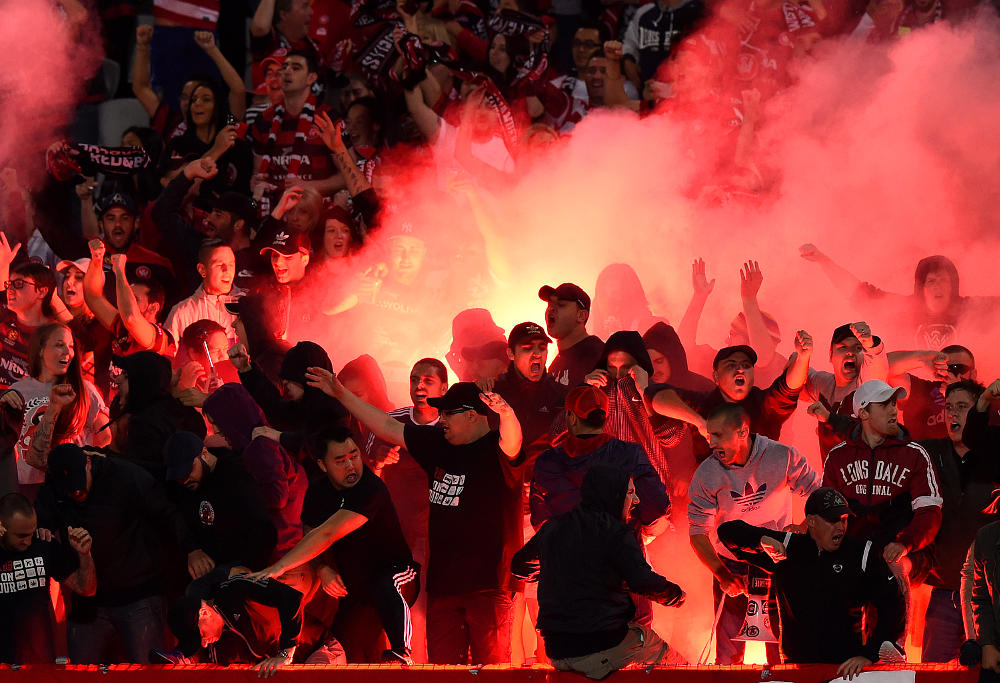 In the Sydney derby, the Wanderers lit multiple flares once their side went behind on the scoreboard and groans could be heard from the crowd as to their displeasure seeing flares lit once again.

It should come as no surprise people are growing sick and tired at the lack of respect shown by those who continue to light them given the apparent stance being taken.

Western Sydney Wanderers have once again avoided sanctions despite the FFA having previously handing out a $50,000 fine and suspended three point deduction pending 12 months of good behaviour.

FFA CEO David Gallop recently commented saying “Use of flares and anti-social behaviour is unacceptable and not welcome at our games.”

“We always said it will have to be an issue of a significant nature,”

“The police were by and large comfortable with the crowd behaviour. “Obviously the flares continue to be a source of frustration and the booing by the fans themselves shows that the vast majority of people don’t want to see flares.”

Though despite a suspended three point deduction looming over the club, it doesn’t appear FFA will take action once again.

This follows on from last season, and yet the club also avoided sanctions in the A-League grand final despite similar incidents.

Fans within social media were in full voice demanding the deduction of three points, though these weren’t Wanderers fans. Rather Wanderers fans were once again making pleas for this to stop.

I’m very careful to label these people who light the flares as fans as they do not act in the best interests of the game.

But I’m quick to defend the majority who do behave. I strongly disagree with a points deduction system as it could have very damaging effects to not only the Wanderers but other clubs as well.

FFA do not take the view these people are fans and agree they are not taking the games interests into consideration. So with that said who is to say more of these people won’t go and commit such action in other active supporter bays.

The issue that faces the FFA more than anything is the backlash from the football community itself. A lot have pointed to a lack of backbone from the governing body who continue avoid taking action and deducting three points.

I personally believe FFA are caught between a rock and a hard place. Take points and potentially open a whole other can of worms or be labelled spineless due to inaction.

I’m not part of the decision making team but I strongly feel it is a matter in which needs to find resolution.

The start to this season has been one to bask in and the last thing we need is for a season to be tarnished due to no resolution being found.

I believe the responsibility should rest with the authorities being FFA, Police and Security but the issue they’re potentially facing is the lack of evidence in successfully prosecuting these culprits.

It’s like a community with a drug problem. You don’t punish the majority, nor is it their responsibility to police. You just work with what you’ve got and when you catch the culprit and are confident and have supporting evidence only then can a matter be dealt with.

I know the two are significantly different in terms of severity, but you get what I mean.

I don’t want the majority of wanderers fans suffering or the potential for my club to be affected at the pointy end of the season when three points might be the difference between a premiership or finals.

I guess another option could be to ban the active supporter bays but even then that would be detrimental to the game and the atmosphere football has become renowned for.

This is a cry to the FFA to find a resolution. It may be that we find comfort in what we have and ignore the negative attention that comes with the use of flares. And perhaps ignoring their use might be what makes the attention go away and perceptions might change. Might I suggest a different approach be taken and that be we allow the use of flares in active supporter bays only? This allows for a known and controlled environment. Responsibility may then be shifted to the club to monitor and control along with the usual use of CCTV, security and Police. If the use of flares go outside the perimeters, a monetary fine can be incurred.

I know it’s a complete 180 on the usual approach taken, but at present nothing else seems to be working and it’s frustrating. Though even with all that said, this idea may have its own issues.

The points of view and concerns are a plenty and perhaps there might be better siolutions out there, but finding a resolution is a must in order to move forward.

Let’s just hope that whatever decisions are made, that they are made with the games best interests at heart. What are your thoughts Roarers?