As the dust settled on an outstanding opening round to the season, attention quickly shifted to Round 2’s line-up of matches that included a grand final rematch and the Melbourne derby – plus the added addition of Tim Cahill making his debut.

The major talking point in the lead up to Round 2 was always going to be focused around the derby and where better to start than with our top five A-League talking points for Round 2?

1. A changing of the guard in Melbourne?
Last week I asked the question ‘Are City the real deal?‘ and if their performance against Melbourne Victory was anything to go by, then I think it was answered rather emphatically!

Melbourne Victory legend Archie Thompson couldn’t believe what he was seeing himself as he spoke live during the match.

“I’ve never seen a City side do that,”

“From that, I know it’s only two games in, (but) there’ll be a lot of teams not wanting to face up to a City team.”

“I haven’t seen a game where one side has dominated us like they have in that first-half.

“I’m sure even the boys in the dressing room will not know what has happened.”

Nor do I think Victory coach, Kevin Muscat even know what happened as he had no answers to the sublime and beautiful attacking football we’ve come to know from Melbourne City.

With the likes of Bruno Fornaroli, Tim Cahill, Luke Brattan, Bruce Kamau and Fernando Brandan just to name a few, surely teams will be starting to think ‘How do we stop them?’

Victory fans may have outnumbered City fans in excess of three to one but if performances like these continue, it’s only a matter of time until the numbers begin to even out and the City of Melbourne starts to shine a lighter colour of blue.

It took some time to get him to the A-League, and might I add I did doubt whether he would ever come, but so far, given his two FFA Cup matches and A-League debut, Tim Cahill has not failed to deliver.

He may not have the accolades and sublime skill that came with Alessandro Del Piero but there is no doubting his presence and ability to generate interest.

Like Alessandro Del Piero before him, Cahill is going to be a player you’re not going to want to miss. I know I’ll be there for sure if he rocks up to Suncorp Stadium. 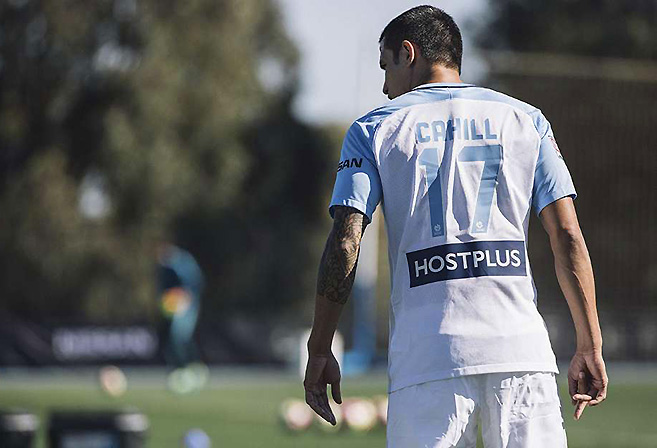 3. ‘Never say die Brisbane Roar’ one week, flattened by the Jets the next
Brisbane Roar were woeful, but before I go any further, I take nothing away from the Newcastle Jets who were simply clinical.

Pre-match and all the focus was on two sets of statistics. One was how favourable the away team had usually faired in the matches between these two; the other was how dreadful the away form of Brisbane Roar had been over the course of last season.

One had to continue as the other came to an end and despite heavy favouritism with the experts, it was Brisbane Roar’s dreadful away form that continued, as Newcastle moped the floor with Brisbane.

In particular, the performance of Andrew Nabbout was largely impressive as Brisbane struggled to contain him.

Despite not being the fastest and technically gifted, his physicality and strength on the ball, coupled with an improving football brain, made for good viewing and more so if you’re a Novocastrian, as this paved the way for an all round solid team performance.

Roar appeared to be uninspired and lackadaisical with their captain Matt McKay missing through the middle of the park.

What was most concerning though was the lack of answers John Aloisi’s had and lack of ability to adjust tactically and sure up defence.

For a side that finished in the top four last season and maintained a decent roster, one would think these sort of results would start to be ironed out and less regular for a coach like John Aloisi.

Only time will tell if John Aloisi has the ability to take it to the next level or if the every so often reminders of the Melbourne Heart days aren’t just a thing of the past?

4. Goals, goals and more goals, but defence?
You can’t ever complain about goals being scored in a football match, nor when they’re of tremendous quality like Tim Cahill’s against Melbourne Victory, but there comes a time when you start to question the tactical ineptitude employed by teams from a defensive point of view.

Sure, if it’s your team scoring the goals, no problem, but it appears to be occurring more often that the losing teams are either giving up as the contest wears on or are displaying an inability to sure up the defence and change tact – and that responsibility rests with the coaches.

It might just be that we’re witnessing a time in which an attacking mindset has been adopted by the majority of teams, but with that comes an expectation our coaches are prepared for the opposing approach and defences need to be organised accordingly.

For TV ratings, it can possibly be seen as one of the more simplistic ways of retaining a viewing audience. However, for those more technically minded, who find assessing the tactics of football appealing and find the joys in what can be a thrilling 0-0 draw, where has all the defence gone? You know, the challenge of a contest.

For within the first two rounds we’ve seen an astonishing 33 goals in ten matches. This continues the trend of last season in which goal scoring records were broken, but in both the good ways and bad.

I’m sure as the season wears on, things like this will find a way of leveling out, but surely we can’t expect consistent performances whereby our teams are falling apart and our coaches are displaying an inability to adapt to what’s in front of them.

No one likes to watch a former Chelsea coached Jose Mourinho play park the bus football, but there is still some appeal in this type of approach and it can make the difference in either the fight for the premiership or a place in the finals.

5. Perth Glory off the mark in the west
It took a week longer than expected, but Perth Glory are off the mark and appeared to have a more steeled focus about them in their match against Wellington Phoenix.

What should have been a no-contest match between Glory and the Mariners last week, turned out a wasted opportunity and a chance missed to sit a top of the league alongside Sydney FC and Melbourne City.

In what many at the club believe could be their year, they showed just how much they’re willing to give in order to fulfill that belief.

With another great attendance (11,209) compared to previous years, the club looks to once again be heading in the right direction as it looks to return to its former glory days.

With an away trip to face Melbourne City next round, the match will test just how bad those at the club really want to contest for the premiership this season and it could potentially set us up for talk of three early contenders for the title.

So with that said, that wraps up another round of our Top five A-League talking points.

We’re in for an interesting Round 3, as three teams play their first home games of the season and five teams are yet to record their first win, while we also wait to see if Sydney FC and Melbourne City can continue their run if hot form.

Look forward to next week to check out the top five talking points of Round 3.