With the season now in full swing, each contest is proving vital in the race for the premiership.

With Sydney having got off to the blazing start, all other teams will need to ensure they don’t switch off and give Sydney a larger lead. With four rounds of action complete, Sydney already find themselves three points ahead of second placed Melbourne City, but with more key match ups taking place in Round 5, there is potential we could be faced with a logjam at the top of the ladder come the conclusion and would create for another week of interesting debate regarding who really are the favourites for season 2016/17.

With that said, let’s look at the top five A-League talking points for Round 4.

1. Sydney FC’s start the greatest we’ve seen
Four games down, 11 goals scored and not a single one conceded – Sydney FC is officially off to the best start any team has had in the competition’s history. Despite the great start, Sydney FC fans remain conscious of getting too excited just yet. They’re quick to remember the start to last season when they also had one of the best starts to a season, yet it amounted to nothing.

When taking into account their form in the FFA Cup though, things start to look even more impressive. Sydney FC is currently on an eight-match winning streak, and in the process has scored an amazing 22 goals and are yet to concede.

They say goals win games, defence wins titles, and when you have a defensive back four consisting Alex Wilkinson, Matthew Jurman, Rhyan Grant and Michael Zullo, you’ve got to look to be shaping well as title contenders already – and that is without mentioning the rest of the team.

What helps make Sydney work so well is their ever-reliable and experienced keeper, in Danny Vukovic. Now playing for his fifth A-League club, I think it might be fair to say he is playing in career-best form. Attributed to Sydney’s having yet to concede, heading into the last match of the round, Danny Vukovic lead the league with most saves with 12.

With all that said, and their attacking prowess not even delved into, I think it would be fair to say they won’t fade away like last season and have the potential to really run away this season if their current form continues.

It wasn’t long ago people lauded the arrival of one Besart Berisha. Upon his arrival, he set the A-League on fire like no striker before him. In his first season he scored an amazing 21 goals in 29 matches and helped Brisbane in winning back to back A-League grand finals.

Besart Berisha currently stands as the third highest scoring striker in the history of the A-League with 85 goals and is only six away from breaking Archie Thompson’s record of 90. Upon breaking the record, which he almost but guaranteed to do, he will have done so in record time. Archie played 224 times to get his 90 goals, whereas Berisha has currently played a total of 134.

Not many would have thought Berisha’s feats would have been beaten in any short space of time, but Fornaroli had other ideas.

In his first season of the A-League, he went on to break the goal scoring record by getting a total of 25 goals throughout the course of the whole season (including finals).

Though, despite his record tally, something was still missing – titles.

After Melbourne City lost Aaron Mooy and Harry Novillo during the off-season, City fans feared that they would also lose Fornaroli and with it, be relegated once again to fighting to even making the finals. John van’t Schip had other ideas though and although discussions took a while, City got their man and upgraded Fornaroli to marquee status and handed him the captaincy – and he has yet to disappoint.

At present, Fornaroli now has 29 goals to his name in 33 matches. No striker comes even close to the scoring rate of Fornaroli in the history of the A-League, not even Besart Berisha.

Though just as impressive is Fornaroli’s work rate off the ball. Against Adelaide it was on display for all to see. He would constantly place himself in positions throughout the whole match which either created opportunities for his team and himself.

The attention he would draw would create space for players like Brandan and Kamau to have room to move, and when players quickly realised the error in reading the play, the ball would quickly find its way back to the marquee man and well, it is none more so evident than in the first goal scored against Adelaide.

With four goals already to Bruno Fornaroli’s name and having broken the goal scoring season and overall records, the sky is the limit for City’s marquee man as his aim is to not only score goals this season but win titles. Can he help in taking them all the way this time round? 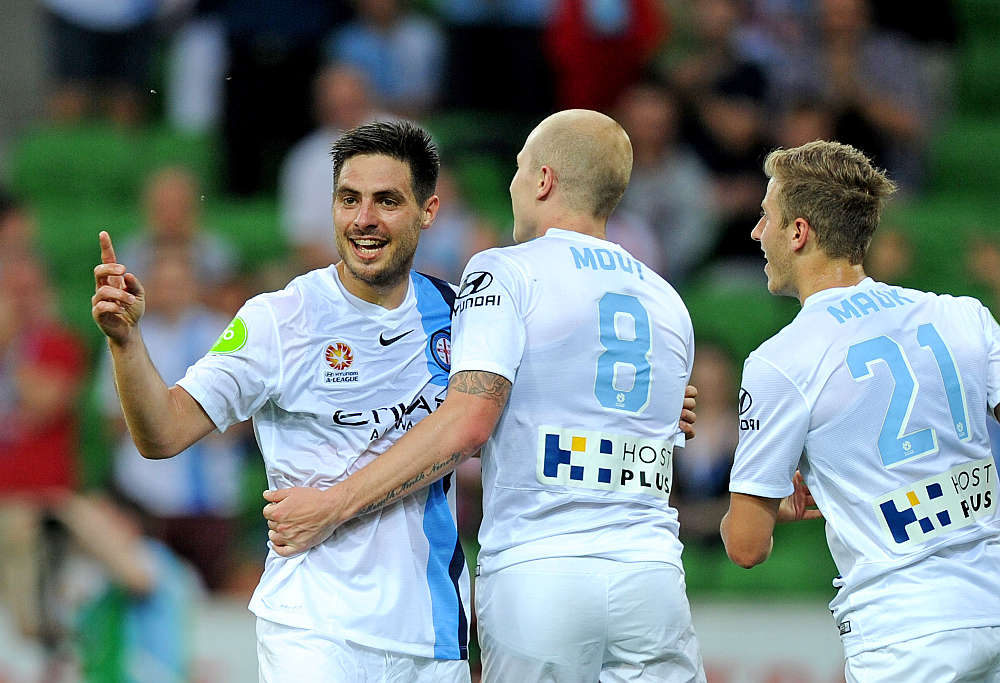 3. Brisbane midfield monster Perth
Going into the match, Perth were one of two teams undefeated after three rounds. Other than letting slip their three-goal lead against Central Coast in Round 1, Glory have been impressive, even knocking off title favourites, Melbourne City.

Coming to Brisbane, though, history always seems to play a part. With Glory’s horrible away record at Suncorp Stadium, Glory would have to go against the grain in order to win. From kick-off though, history looked as though it would repeat as Brisbane Roar completely dominated the Glory in all facets of the game, but none more so than the midfield battle.

After Brisbane played out a dour match the week prior against the Mariners, not many would have expected a performance as dominant as this one.

Brisbane’s midfield duo of Kristensen and McKay were involved in everything. Distribution was a key factor in the Roar’s dominance of midfield and they suffocated the Glory’s midfield, mounting constant pressure through the middle of the park.

At one stage, Brisbane had asserted their dominance so much that they had a total of 100 completed passes to Perth’s 18. What was also good to see was Jamie Maclaren get on the scoresheet to start his 2016/17 account. With Ange Postecoglou having set the challenge to all Australians, Maclaren will want to improve on last season’s performance if he is any chance of making it into the Socceroos squad once again.

It was a much needed win for Brisbane as it now has them sitting fifth, only outside of the top four based on goal difference. There is still much more work to do for both sides, but with home matches for both teams set for Round 5, there will be another opportunity for both sides to continue with their run of form and bounce back, respectively.

Whether it is the vast changes in playing roster that took place in the offseason or a mental aspect of their game the players are struggling with, it is something the Wanderers will need to address and rectify quickly.

The season is already in full swing and each week is proving vital in the race for the premiership. Although Sydney FC have come out of the blocks blazing and started perfectly, no matter how well they’ve played no team is guaranteed the three points each week.

With Wanderers holding aspirations to once again be title contenders, they will need to bounce back and start winning sooner rather than later. Adelaide’s slow start to last season and their amazing resurgence to win both titles was an anomaly and most likely will not be replicated for some time, but the benefit to Wanderers is that they are no strangers to slow starts and won’t want to leave it until Round 9 to start their hot run of form.

In their short history, their achievements have been impressive and you cannot write them off, but with each passing week, it is only going to get harder. One loss could make the difference between the top spot or missing out on the finals all together.

The Mariners, despite not fairing as well on the ladder compared to the Wanderers are faring a hell of a lot better than last season under the guidance of Paul Okon. To be fair, the Mariners were written off by all at the start of the season, though against the Wanderers, they were unlucky not to have won the match as they went close on a number of occasions.

Despite not yet having won a match, you can see what Mariners coach, Paul Okon is trying to achieve in such a short time with this team. This may not be the season for the Mariners in terms of winning titles or even making the finals, but what they can aim to do is perform more competitively and consistently. Other than their performance against Sydney FC, they are doing just that.

After being knocked out midweek by Melbourne City in the FFA Cup, Victory would have been hurting and for Phoenix it would have been the perfect opportunity to pounce and claim their first win of the season.

What took place though was a calamitous effort from the Phoenix. Despite Victory leading 2 nil at the break, the match was still in the balance until Dylan Fox was sent off in the 59th minute. From that point onwards it was just carnage as Victory went on to score a further four goals.

For Victory it was a much-needed win that will ease the pain slightly of not being able to defend their title in the FFA Cup, but for Phoenix the pressure will continue to mount for Ernie Merrick and his players.

Having had the pressure placed on them last season by the FFA to perform and show why they deserve to remain in the competition, they have a long way to go at proving why they are an asset to the league when although they have the quality of players to perform, they can not even muster enough of an attack to score from open play.

The only consolation for the Phoenix is they scored a goal through a penalty. As Barbarouses said pre-match, once the first goal is scored the flood gates will open. Let’s hope he is right as they go back home next week to play in the cavernous Westpac Stadium and will need to show the people of Wellington why they should come and support the club to ensure its longevity in the competition.

That’s a wrap for the Top five A-League talking points for Round 4. What did you make of the action this week?