Is it ever okay to stop supporting your team?

At what point do fans stop supporting their team? It’s a question Adelaide United fans may soon start asking, with the club seemingly ready to go to war with its own fans.

The statement released by Adelaide United yesterday smacked of the sort of overly sensitive reaction to criticism we’re seeing a lot more of in football nowadays.

What did Aurelio Vidmar call Adelaide again? It seems old habits die hard, after the club’s decision to “correct” fans who questioned whether the club was spending the entirety of the salary cap.

“Putting aside the totally inappropriate language used and directed to Adelaide United Board Members and family of our coaching staff, which will be dealt with, the club believes it is important to correct the falsities in the minds of some fans regarding player spend this season,” part of the statement read.

“The club has spent 100 per cent of the Hyundai A-League’s salary cap and we have utilised our home-grown player allocation and marquee funds.”

Predictably, Reds fans began ripping into the club almost immediately for what reads like a comically childish statement, with some 240 comments posted on Facebook – none of them complimentary.

If the club wanted to take some of the focus off coach Guillermo Amor and his misfiring outfit, mission accomplished.

But with just one win in 14 A-League games, there’s no doubt the defending champions would be better served working on their football than chastising fans for the heinous crime of caring.

Still, it got me thinking, is there ever a right time to pull the plug on the team you support?

I spent an enjoyable couple of hours at Suncorp Stadium on Saturday, as visitors the Newcastle Jets stunned their hosts Brisbane Roar to nick a shock 3-2 win on a sun-drenched afternoon.

But meeting up with some fans at the bar who’ve been attending Roar games since day one, they told me that if a new Brisbane club enters the A-League, they’d be willing to switch allegiance.

These guys weren’t just a couple of casual punters – they’d been to pretty much every Brisbane Roar home game since the A-League kicked off, so their words carried some serious weight. 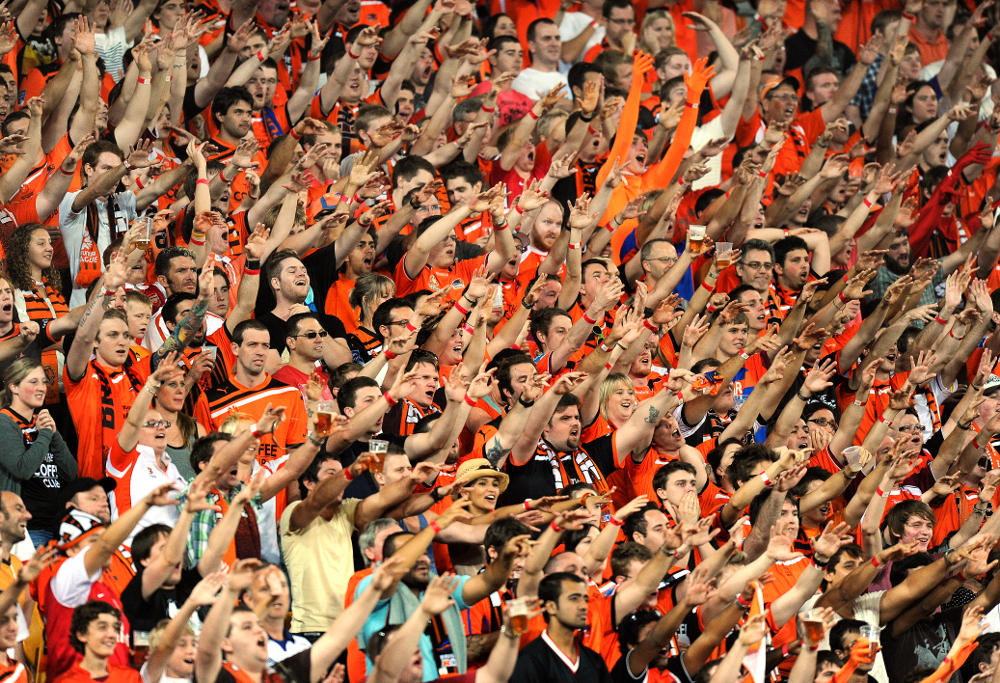 Their reasons for being dissatisfied with the club were complex, but the crux of the problem was what they labelled a lack of “football culture” in Brisbane.

I understood where they were coming from – to an extent – but when the focus turned towards wanting Brisbane Roar play out of a smaller stadium, I felt like we were only dealing in hypotheticals.

I have no doubt that if the Brisbane Strikers were to play out of a redeveloped Perry Park, a sizeable contingent of Roar fans would switch clubs.

But who is paying to redevelop Perry Park? And what happens to the Brisbane Roar in the meantime?

The home fans trudged off disconsolate following Danish striker Morten Nordstrand’s controversial late winner, with a few boos even ringing out at full-time, despite the fact it was the Roar’s first home defeat of the season.

And while the hosts were certainly flat on the day, there’s surely an argument for suggesting the Newcastle Jets simply played better football than their opponents.

Is the simple act of losing now all it takes for fans to register their disgust – convinced that their own players are refusing to put in the required effort?

Or is it a case-by-case basis, with Central Coast Mariners fans going home happy last night following their team’s Herculean effort in the 3-2 defeat to league leaders Sydney FC?

I may be painting with broad brushstrokes here, but as a society, we seem to be quicker than ever to express our outrage these days.

So how much is enough for fans to call it a day on supporting their club? And is it ever okay to do so?