Boy, did we get it wrong!

I am quite happy to admit I have substantial egg on my face. In fairness though, I am not an orphan.

Before this series, I predicted India would win all four Tests, just as it did when the two countries met in India in early-2013.

Over the past four years, if anything, India has become a stronger side.

So much so, heading into this series it had not suffered a loss in its past 19 Tests and in the process assumed the number one world ranking.

On face value, I saw little in Australia’s progress in the past four years – a 2-0 loss to Pakistan in the UAE and a 3-nil loss in Sri Lanka – to indicate that the 2017 tour would be much different.

Yet, after two days at Pune, the series has been thrown on its head with Steve Smith’s men taking an iron grip on the opening Test, and in the process, landed some telling blows.

Barring a couple of Indian batsmen channelling Laxman and Dravid circa 2001, the hosts are doomed.

From the moment the Indian skipper, Virat Kohli, opted to take the second new ball late on day one the momentum started to swing Australia’s way.

Shortly after claiming 4-15 with a ball that was reversing for the quicks he took the new ball only to see Mitchell Starc deposit it several times into the stands.

Starc’s efforts would have buoyed the dressing room and added pep to the Australian step.

He added a boundary in the first over of day two before falling in the deep for 61 in a total of 260.

Despite the tenth wicket getting away from India, a 260-run first innings would not have overly disappointed them.

In its recent home series against England, the visitors amassed over 400 runs in the first innings three times only to draw one Test and lose the other two.

Despite the advanced wear and tear on the pitch heading into its first innings, India would have still liked its chances of securing a first innings lead.

Instead, it was dismissed for a meagre 105, gifting Australia a 155-run lead.

It was a calamitous innings by India, one that nobody surely could have seen coming.

Starc and Josh Hazlewood knocked the top off the innings – Hazlewood snaring Murali Vijay (10) and Starc claiming the key scalps of Cheteshwar Pujara (6) and Kohli (0).

The Indian skipper, who has made a double century in each of his last four Test series, chased the second ball he faced wide of off-stump only to see Peter Handscomb snaffle it at first slip.

Starc’s dismissal of Kohli was the most vital moment of the match to date and one that help set the tone for the Aussies in the field.

Fifteen overs later the innings was all over with eight batsmen failing to reach double figures as the hosts lost a staggering 7-11.

Steven O’Keefe was superb, bowling the spell of his life, capturing six wickets in 25 balls, including snaring three in the one over to finish with 6-35.

Earlier, he had opened the bowling with Starc.

There was nothing at that point to indicate the destruction he would later produce. In fact, O’Keefe, after the day’s play, described his first six overs “as pretty ordinary”.

As soon as he swapped ends, so too did his fortunes.

All of a sudden, everything came together as a combination of flight, spin, and bounce wrought havoc.

He was aided by some wonderful fielding close in by Peter Handscomb and a couple of slogs into the deep by top-scorer, Lokesh Rahul (64) and Ravindra Jadeja.

For O’Keefe, it was a just reward for a consistent first-class career.

Coming into this Test he had collected 225 wickets at 23.8 in 66 first-class matches.

He had looked good in Sri Lanka late last year. A ten-wicket haul in the warm-up game ahead of the first Test was followed by 3-74 from 27 overs at Pallekele.

Injury saw him miss the last two Tests of the series.

With an innings with the ball still ahead of him in his fifth Test, he now has 20 wickets at 24.7.

He has never been a big spinner of the ball and has relied primarily on subtle changes of flight and relentless accuracy, much in the mould of former Black Cap skipper, Daniel Vettori.

Yesterday at Pune, in the space of four overs he produced a spell that may define his career.

It has also put pressure on Nathan Lyon, the country’s lead spinner. While tidy, he picked up 1-21 from seven overs while O’Keefe was making merry at the other end.

By stumps yesterday, Australia had taken its lead to 298 with Smith leading the way with an unbeaten 59.

India looked deflated in the field late in the day.

Smith was given three lives by the time he reached 37 and Matt Renshaw was also given a chance. 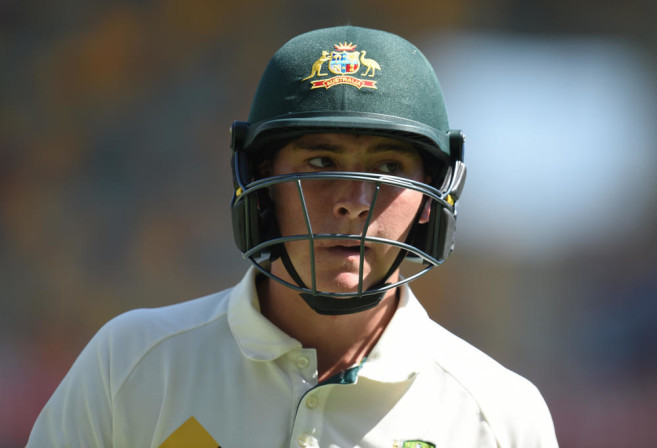 Kohli was visibly agitated by his side’s lacklustre showing in the field. No doubt, Indian fans would have also been shaking their heads after a day that belied the sides number one ranking.

Not everything has come up roses for Australia.

Shaun Marsh followed his first innings 16 with a 21-ball duck.

He was recalled to the side on the back of his previous performances in Asia (399 runs at 79.8) and a century in the warm-up game against India A in Mumbai last week.

The man he replaced, Usman Khawaja, has been a serial struggler against spin – England offie, Graeme Swann picked him up five times in Test ranks (more than any other bowler) and in four Tests in Asia he has averaged 19.2.

Marsh will hold his place for the second Test at Bangalore but another twin failure may see what happened in Sri Lanka last year reversed with Khawaja returning to the side at Marsh’s expense.

As a senior player, he needs to do more at the top of the order.

Mitch Marsh contributed just four in the first innings at number six and was not called upon to bowl in India’s 40-over first innings.

He will resume today on 21, in search of runs to help vindicate his selection in the all-rounder’s role.

All-in-all, however, it is hard to fault Australia’s overall showing to date.

It last won a Test in India at Nagpur in October 2004. It was a victory that secured its only series win in India since 1970.

From then, in 11 Tests in India, Australia has lost nine (including the last seven) and drawn two.

In the next few days, barring an absolute calamity, it is going to end its losing streak.

And, in doing so, set up the possibility of a series win.

That is something I never imagined two days ago.