The AFL could learn a lot from Cooper Cronk

Last week, Melbourne Storm veteran Cooper Cronk announced that he would be leaving the club at the end of the 2017 season.

In a wonderfully clean and straightforward press conference, Cronk made it clear that he wished to make the move to Sydney in order to be closer to his partner.

Cronk spoke glowingly of the Storm – his football home of 14 years – but said it was time to put his desire to start a family first.

Breaking the news to the public and his team now, instead of at season’s end, was also a gesture of goodwill to the Storm that ensured they are afforded ample time to decide how they will tackle the issue of replacing the legendary half-backer.

The amicable nature of the split, which was well handled by both club and player, is in contrast to how petulant those within the AFL industry become when they have to handle potential walkouts.

NRL players have been announcing their intentions to move mid-year for yonks, but us Aussie Rules folk can’t seem to comprehend a player wanting (or needing) to make a decision to leave while there are still games to be played.

This issue was only magnified by Gary Ablett junior’s peculiar interview on The Footy Show last Thursday night. 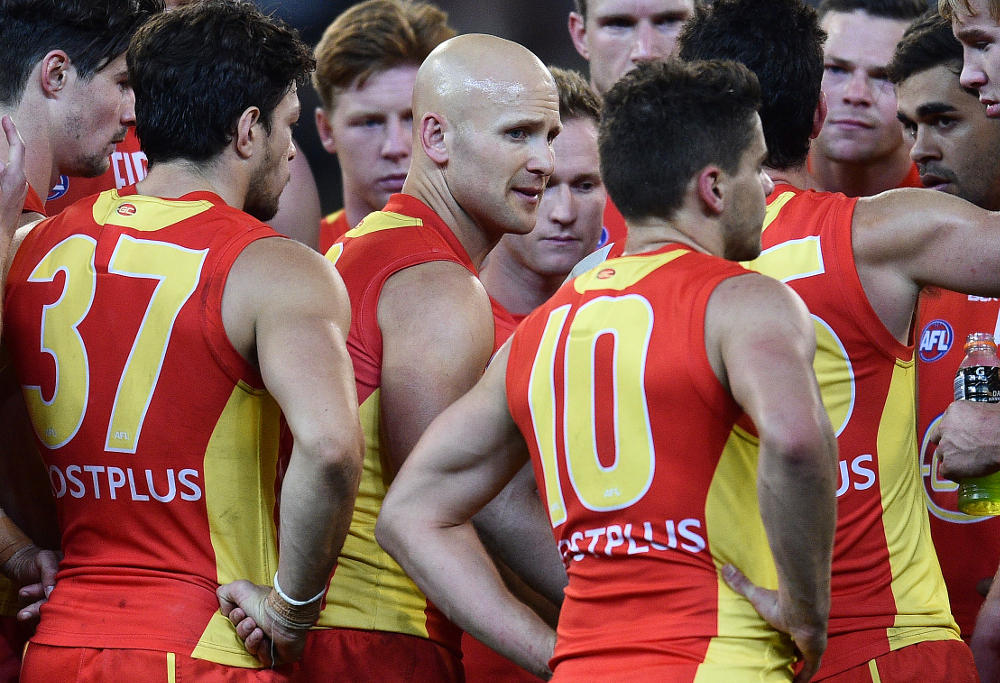 Although Craig Hutchison and Sam Newman did their best to reword the question ‘”are you going to leave the Suns at the end of the year?” over 183 times, there was evidently no point.

Ablett used a straight bat to defend the question back to the bowler so many times that he looked likely to seek a trade to the Australian cricket team.

This is because Gary can’t openly tell the Suns that he’s leaving, even if he does plan to seek a trade as soon as the siren sounds on Gold Coast’s 2017 season.

Coming out would put unnecessary strain on his relationship with the club, when in fact he has their best interests at heart.

For some reason, AFL coaches and administrators are holding on to the archaic notion that a grown man is incapable of chasing a piece of leather around a patch of grass to the best of his ability if he intends to wear a different colour when he does the same thing a year later.

This is not the first time that Gaz has been implicated in an AFL clubs’ inability to deal with the trade process.

In 2010, he and Bomber Thompson squabbled like a married couple when he refused to re-sign with Geelong as a lucrative offer from the Suns loomed large.

In reality, would Bomber really blame him for accepting a deal that sets him and his family up for life and beyond?

More recently, ex-Carlton utility Lachie Henderson was taken off the selection table towards the end of the 2015 season after signalling his intention to move home to Geelong at season’s end.

Footy boss Andrew McKay justified his standing down by saying Carlton would only pick players who were ‘excited to wear the Blues jumper’.

The common theme among these examples is that it is almost always family reasons that compel footballers to move between clubs.

Whether it be a journey closer to home or a substantial pay increase, players take opportunities to make life easier for them and their families, and we would all do the same.

But while no one in the AFL industry claims to prioritise their football life over their family life, the same people act like their brains have exploded if one of their players dares to mention the word ‘trade’ before October.

The reality is, as Cooper Cronk so eloquently put it, list managers need more time than the desperate scramble that is the trade period to adequately cover for their loss.

At the end of the day, this is just another example of a stubborn AFL industry being slow to react to the rest of the sporting globe.

Within a couple of years, I’m sure our stars will be exercising Cooper Cronk and Melbourne Storm-like maturity during break-ups.

Expect to see players saying their goodbyes mid-year before having one last, red-hot crack for their club of departure.

Sometimes you have to be cruel to be kind.

In NRL season 2020 we experienced a phenomenon known as player swapping.