If Adam Simpson has learned anything in the past couple of days it is that perception means a lot in football.

The unflappable nature of the West Coast coach has been a hallmark of his four-year tenure in Perth and so a flustered and breathy press conference after the weekend’s fade-out loss to Collingwood was perhaps even more meaningful than the actual words he spoke.

It was a first public clue that his side’s slide from premiership candidates to also-rans had stolen away Simpson’s usual considered self.

For that he hardly deserves ridicule – it revealed a man who was hurting and who deeply cares – but for those paid to provide off-the-shelf criticism it was the cue card to pile in.

And pile in they have.

Most of it has been unhelpful highlighted by unedifying suggestions that Simpson’s ‘nice guy’ persona is incompatible to success.

Those inclined to believe such heavy-fingered venting should probably avoid reading the career highlights section on Simpson’s Wikipedia page. They should certainly not look up a bloke called Roger Federer.

Amid the throwaway punditry and headline grabbing a fair chunk of the criticism has, however, been hard to dismiss.

When Jack Darling opted to run down the shot clock in the very first minute of the last quarter, when he had a shot on the goal-line, the stage had been cast for a needlessly nervy final term and negative mindset. 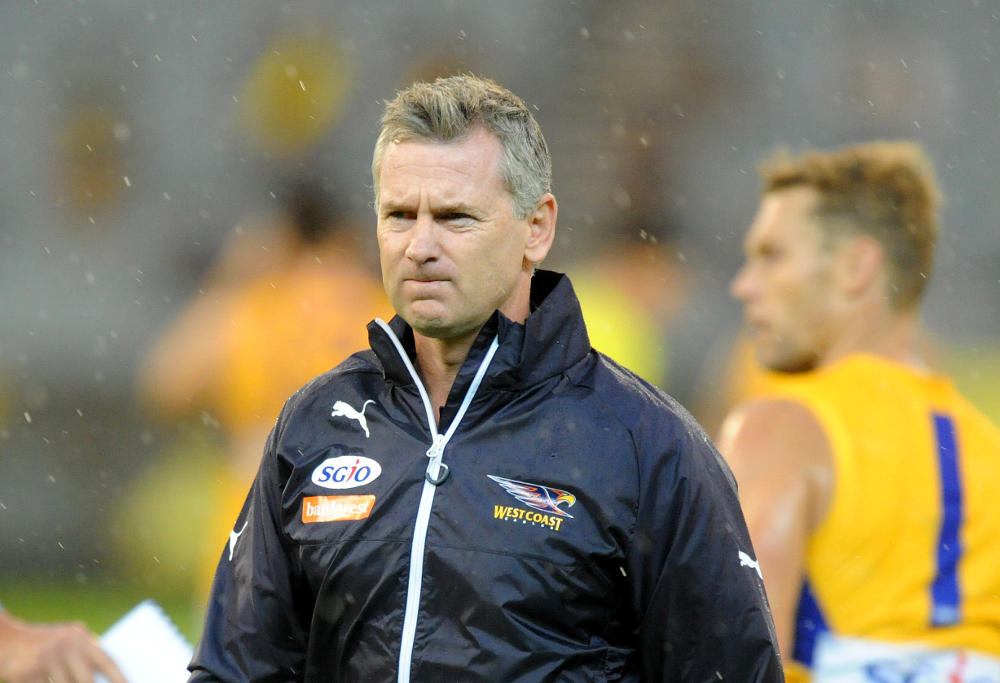 It is a recurring theme at West Coast too – remember Lewis Jetta against Melbourne – and even Josh Kennedy attempted some ill-advised time wasting against Collingwood in the last term before failing to register a score from 45 metres out.

West Coast were lucky to hold on in their previous two wins against Fremantle and the Western Bulldogs while in similar circumstances the fingernails broke off in defeats against Melbourne, Greater Western Sydney and Gold Coast. Against Port Adelaide they caved in completely after being level at three-quarter time.

A lack of contested possession, of speed in their midfield or nous around the stoppages when it counted also contributed to defeat on Sunday.

The critics weren’t short of ammunition, perhaps too much for some, who ended up tossing the cannon balls overboard while still holding the lit match.

In the ensuing wave of criticism weighing down on Simpson, and his team, it is easy to lose confidence in what he is doing despite a reservoir of goodwill remaining.

Simpson has always been a reasoned straight-shooter, an admirable quality, and when the oft-repeated accusations of ‘Fast Track Bullies’ have been made he has always accepted his players and staff must take them on the chin and get better.

That those accusations have lingered through the 41-year-old’s tenure are probably a reflection of the Eagles’ inability to fix their away record as it is a lazy media line.

Arguably a more significant narrative has emerged during this season as a perceived lack of faith in youth, and perhaps poor drafting, has left the list looking too old to compete.

Again, Simpson has readily accepted these accusations albeit without promoting the likes of Luke Partington – who has become something of a poster boy among Eagles fans for the club’s lack of young players.

That is almost certainly an unfair pressure for a player who is yet to play an AFL game and one which probably sums up the corner West Coast have painted themselves into.

Simpson is in an unenviable position where he can no longer afford to rely on the older players who have flitted in and out of the team, but has not got enough games into his young players to fully trust them either.

Simpson hinted at that in the press conference after the Collingwood defeat, when he also pointedly suggested any inexperience among his players should be overcome by a “will to win”.

The line stood out as that understated Simpson-style ‘straight-shooting’ that fans have become accustomed to but, as finals drift out of the picture, there is an increasing perception that the time has come for such words to be turned into action on the field.

That captain Shannon Hurn repeated the platitudes in Monday’s press conference with suggestions the team needed to play ‘man’s footy’ – whatever that is – only served as a further reminder the time for talk is over when last-placed Brisbane come to town this Sunday.

But where confidence is low among West Coast fans it is arguable also that the club are no more than victims of unreasoned outside expectation. That they are achieving no more than their list capable of.

There is a short video doing the rounds on social media at present where a professor offers an insight in the principle of happiness.

As if to mock his audience’s ability to remember basic analogies the professor uses a half-full glass to convey that you’re more likely to be happy if you remain within your expectations of the water line.

It’s a strange motivational reminder to keep your ambitions low and let the good times roll.

It’s a pretty mundane outlook on existence but in the hot-stove of AFL expectation it is arguably not a bad piece of advice. Certainly it is from the same textbook that Fremantle boss Ross Lyon has expertly played his tune all season.

When Lyon proclaimed at the start of the season that the Dockers were still in a full rebuild that was the narrative set for the season.

Whichever way you want to perceive it, that is smart coaching – take the pressure off the players and your staff. Keep the heat out of the kitchen.

The proof has been in the pudding this week when, 24 hours after Fremantle pieced together one of the more insipid performances by a Perth club at Subiaco Oval, Lyon and his team were neatly side-stepping any fallout as the Eagles’ season came crashing down at Etihad Stadium.

Not because they played worse than Fremantle but only because they fell foul of that professor’s analogy after setting up residence above the water line.

Simpson has never been one to trumpet his side’s ambitions beyond the reasonable, but the Eagles began the season as a premiership fancy despite beginning it without their two first-choice ruckmen and a midfield that has pivoted on the fast-of-mind, slow-of-leg thirty-somethings Matt Priddis and Sam Mitchell.

After the Western Bulldogs set the blueprint for the run-and-gun style that dominates the AFL right now, and the Eagles’ notorious fluctuating home-and-away form, their favouritism was hard to fathom.

For a club of West Coast’s stature, however, that expectation comes with the territory and it is a part of the job that Simpson is now fully being exposed to.

In a two-team town, where the press rides one horse far more closely than the other, managing that perception is critical.

Lyon is a master at it, a valuable trait guided by experience, and it should be remembered Simpson, at 41, is still learning his trade despite having already been to a grand final.

But where Lyon can afford to roll into his shell and rebuild – at a club where the fans are more willing to accept such notions having been starved of genuine success – West Coast is different because success has been enjoyed and now demanded. 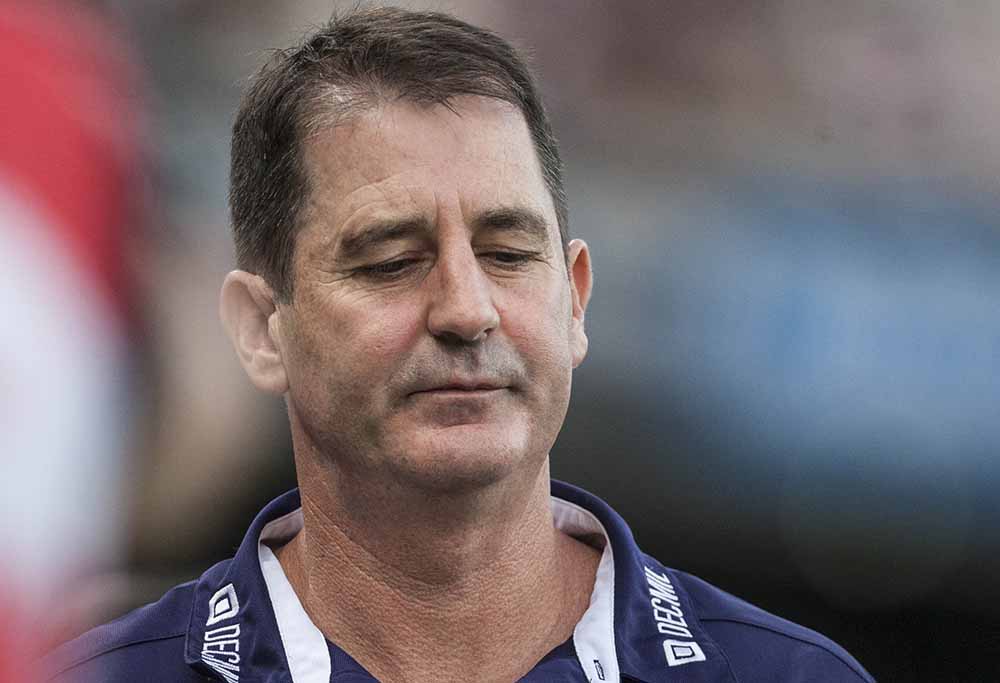 Call it the strength of the club, or the needy weekend-whim of Eagles’ fans, but a win-now culture exists. It’s why they’ve been to 21 finals series in their 30-year history.

It also, however, explains why the bleating started in earnest this week once the threat of missing the finals became apparent.

If nothing else that will serve as a compass point for Simpson to navigate in the future if he does remain as Eagles coach, and an important rope to be learned for any new coach who might replace him.

For that reason it would appear counterintuitive for the Eagles to have any Simpson exist plan. Indeed, the club have built their success by backing their coaches.

Simpson is the Eagles’ sixth coach in their history. Only Mick Malthouse and John Worsfold have coached more games for the club and the faith shown in them was rewarded with premierships cups.

It is sensible to believe too that Fremantle are following that blueprint with Lyon and Nat Fyfe as a long-term coach-captain duo.

But if history says the Eagles will back Simpson the fact remains he still must overhaul those challenges that sit low over him.

The irony of the situation is that diving into a rebuild, and managing the expectations of West Coast’s demanding fans, might now be his only real option.