The Demons seem destined for September

Jake Melksham was tied against the boundary. The paltry crowd echoed around the MCG and the time, finite as it is, dwindled away, fast becoming Port Adelaide’s enemy.

Having taken the luckiest of marks, Melksham was burdened with the unenviable responsibility. A goal would see Port’s slight chance of winning dashed and have questions of its premiership credibility arise. It would also see a Melbourne side claim an important scalp on the road to September.

With the conviction of a deadeye shooter from an old time Western, Jake Melksham slotted it.

Some may make more of Port’s inability to win against their finals-bound peers; however, Port still remain well inside the eight with finals fast approaching. Given how even the competition is, Port is well entitled to think it is not important how they make finals, it is just important that they make finals.

As the Bulldogs showed last year, anything can happen from the first week of finals until the last.

It would be easy to say this moment won Melbourne the game – literally and obviously it did – but to take that moment in isolation would deny Simon Goodwin and his team the praise due for their improvement, savvy recruiting, tactics and top-level performances.

For most of the match, the first half in particular, Port were no match for a rampant Melbourne side vying for their first finals appearance since 2006.

The current iteration of the Demons has become what Paul Roos and Peter Jackson set out to achieve four years ago: a strong contested ball team with manic pressure.

Simon Goodwin’s master plan to bring extra numbers off the back of the centre square and allow them to break through the midfield, swarming the opposition with extra numbers, has proved key to Melbourne’s strong clearance game, which sees them ranked fourth in the league.

Equally, the addition of Max Gawn, Jack Viney and Nathan Jones should only enhance their midfield success story depending on how soon they can reach full match fitness again. 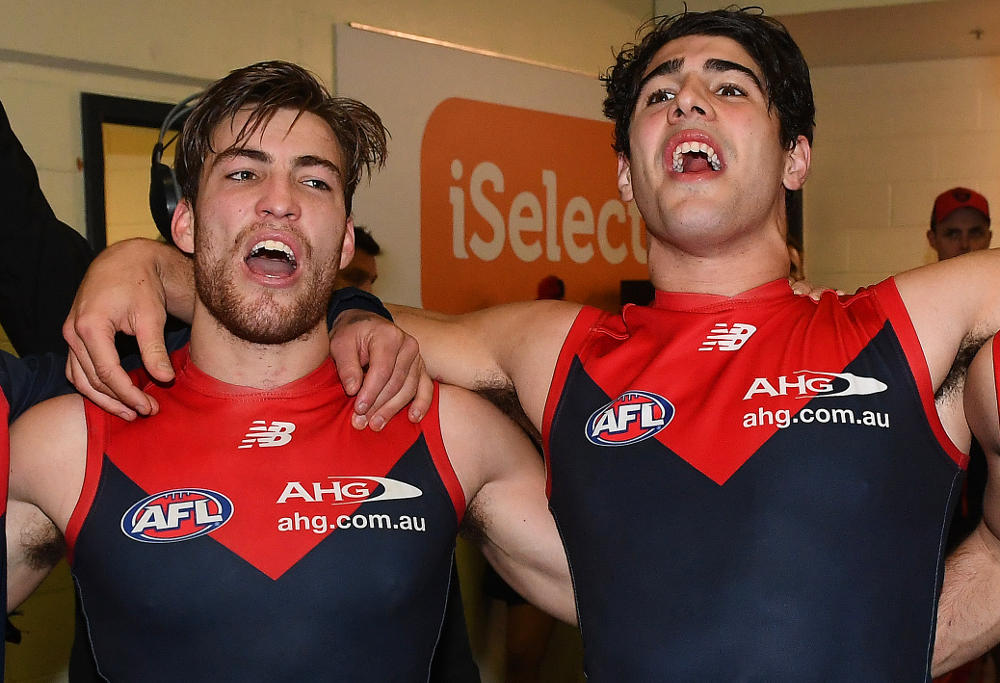 It’s worth noting Melbourne ranks first for possessions, second for contested possessions, third for tackles overall and fourth for tackles inside the forward 50, key stats which normally equate to strong game plans. Additionally, Melbourne is surprisingly accurate, with a 54 per cent conversion rate once inside forward 50, the best in the AFL.

Having lost close games against Hawthorn and Fremantle and having been overrun in the final quarter against Geelong and Richmond, it felt like the Demons did not have it in them to win a tight match – but Melbourne proved willing to dig in and scrap, as they did against West Coast weeks earlier.

For the majority of the last quarter against Port Adelaide neither team could break forward and score, a result of Melbourne’s resolute defence supported by immense numbers and Port Adelaide’s sub-par ball usage.

The same is true of Jack Watts and Jesse Hogan, both coming back from long-term time out. The duo should boost Melbourne’s forward line, which at times has appeared slightly dysfunctional and chaotic. The presence of Jesse Hogan is particularly a luxury given his contested marking ability, an area Melbourne needs to rectify, ranking 17th.

The marked improvement of Christian Petracca, Jayden Hunt and Alex Neal-Bullen alongside the stunning years of Michael Hibberd and Tom McDonald should give the red and blue faithful belief that they could be serious contenders in finals.

Every other metric points to a game style that compares favourably with the golden dynasty of Hawthorn, a nice omen for the success-starved club.

Hope has long been taboo in Melbourne’s heartland. Years of failed comebacks and plans left a trail of broken dreams. Yet finally, emboldened with attacking flair and mental strength forged by injuries and the experience of close games, Melbourne fans can see hope crystallise into the tangible realisation of finals and still, despite the odds, vying for a top four place.

Should they reacquaint with September come seasons end, anything could be a reality.

Melbourne fans have endured a lot in the past 12 years, from tanking to bad drafting to a 186-point loss.