Cricket Australia are running out of time, and they know it

After months of posturing, claims and counterclaims, Cricket Australia is looking to bring the current pay dispute to a head.

In a break from its previous policy of containing the dispute as best as possible behind closed doors, CA went public yesterday. Very public.

CEO James Sutherland held a hastily convened al fresco media conference at which he laid out CA’s plan to resolve the stand-off.

He was blunt and to the point: “What we’re proposing out of this is that we do go into some intensive discussions over the next few days that will hopefully see the matter come to resolution. Failing that, we believe that the best course of action is to get the matter resolved through arbitration, get the show on the road and move on.”

Sadly, the show has been on the road for many months now – a rocky, potholed and poorly signposted one.

The ACA’s response last night to Sutherland’s plan was to say arbitration was “adversarial” – hardly a glowing endorsement.

For CA, time is now an imperative with potentially crippling financial issues on the horizon.

Doubtless, CA believed it would have won this battle a fair while ago but the players have held firm and refused to buckle.

But, on the cusp of August, CA can no longer risk this dragging out any longer.

Cricket’s two free-to-air rights holders need to go the marketplace to secure advertisers for the international fixtures and Big Bash.

The Nine and Ten networks need certainty. Time is now of the essence.

And on the horizon before the Australian summer is next month’s Test tour of Bangladesh and a one-day series in India in October – both of which hold significant ramifications for CA should they not go ahead.

Australia has not played a Test in Bangladesh since Jason Gillespie’s famed double century in April 2006.

Australia was programmed to play two Tests in Bangladesh in October 2015 however the series was postponed.

In June, CA announced it was prepared to go next month.

Another no-show would be a major slap in the face to Bangladeshi cricket and the country in general.

Social media on the sub-continent has been rife with suggestions that the pay deal would be finalised after the proposed tour as the players do not wish to travel to Bangladesh and they are holding out because of that.

The reasoning is fanciful but it is another indicator of how the Australian team is viewed in that part of the world.

Of greater concern is the financial maelstrom that would be predicated on a cancellation of the ODI tour to India.

If there is one bear that you do not want to poke in the cricketing world, it is the BCCI.

When West Indies cut short its tour of India in October 2014 over an internal pay dispute, leaving several fixtures abandoned, the BCCI did not take kindly to the snub.

It sent the WICB a bill for US$42m, stating it was liable for the cancellation of the tour and the associated financial damage the decision had wrought.

At the time of India all but suing the WICB it had just declared a US$5m loss and was on the cusp of bankruptcy. India withdrew its claim.

CA faces no such financial pressures, and as such, the BCCI would likely be far less tolerant should Australia be a no-show.

To get the sport back on the park and avert potential series cancellations, CA has effectively offered to roll over contracts under the previous MoU as it entered arbitration should it get to that point.

Male players would be offered short-term contracts under the recently lapsed pay model while women would be paid under CA’s recently proposed model.

While those contracts are running, a new MoU would be designed and signed. 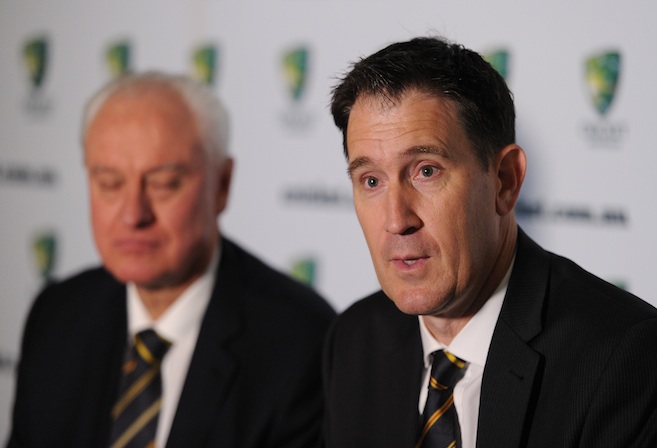 This would clear the way for the tours to Bangladesh and India to go ahead and save the Ashes series.

While the ACA sought mediation two months ago, arbitration is a different process.

Where the ACA had hoped to have a neutral third-party assist talks in the hope of finding an agreed resolution, CA’s arbitration suggestion would see both parties present testimony and give evidence to an arbitrator, in a manner similar to a court, but in a less formal fashion.

Given the gulf that has existed between the warring parties, Sutherland’s planned “intensive discussions over the next few days” are unlikely to bear fruit.

It will then be up to the ACA to decide whether to accept the offer of arbitration.

Sutherland indicated that CA’s preferred arbitrator is “someone like a retired Supreme Court judge” rather than the Fair Work Commission, the country’s official industrial relations arbiter.

The ACA would need to agree to such an umpire.

Some of Sutherland’s comments yesterday are likely to draw ire from the ACA.

His assertion that “we seem to be bogged down at times in process and strategies that are perhaps designed to slow things down” will be seen as a red rag by the ACA.

As too, will his comment, “I have had increasing concerns just about whether everyone is going at the same pace and is dealing with this issue with the same level of urgency.”

Given 230 players have been unemployed since 1 July, the ACA may disagree.

Firstly, we have to wait and see whether he will actually be called into play.

CA has taken the ACA by surprise with this latest proposal.

The ball, to a large degree, is now in its court.